Rather than abstaining from alcohol, Germany's politicians took swigs of beer and rhetorical swipes at one another during traditional party gatherings on Ash Wednesday. But the humor also veered into more serious ground. 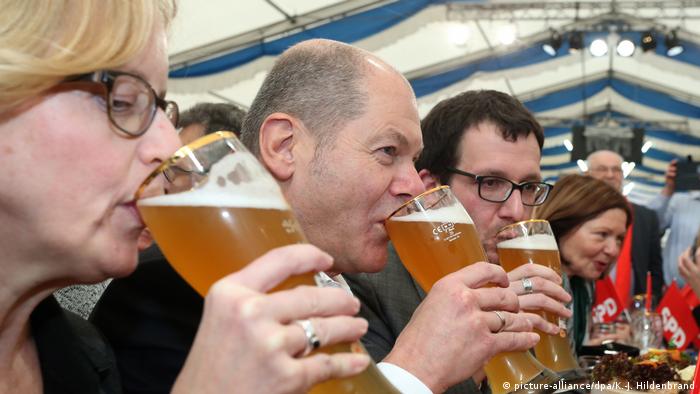 The get-togethers held annually by each of Germany's political parties on the first day of the Christian fasting season of Lent historically trend towards informal, beer-drinking affairs filled with light-hearted political digs at one another.

But this year the disappointing election results of September 2017 and the ongoing challenge to form a new government meant that the day's comments turned from roast to stump speeches.

"Never before after an election year has there not been a new government by Ash Wednesday," Angela Merkel told her party, before delivering sharp, if veiled, rebukes at Germany's political parties.

The CDU head and acting chancellor has faced criticism from within her own party for making overly generous concessions to the Social Democrats (SPD) during the ongoing government negotiations.

Merkel delivered her Ash Wednesday speech at a hotel's tennis and squash center in Demmin, a city in her constituency state of Mecklenburg-Vorpommern.

"This moment is not about permanently asking what the other one is doing wrong," Merkel said.

"Instead it is about every person and every party asking themselves what they can do for this country, for that this the task of politics: to serve and not to whine endlessly." 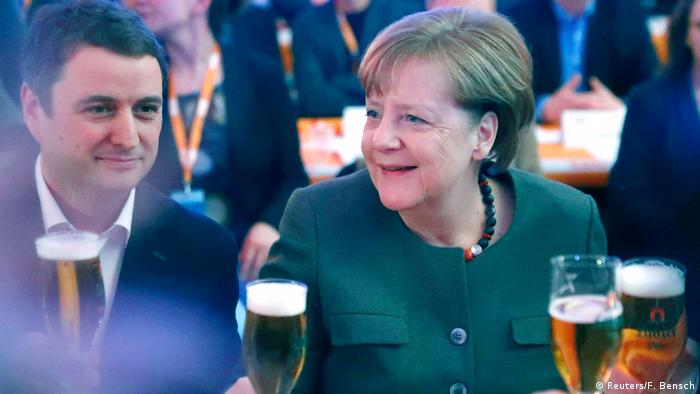 Merkel washed down her pointed political remarks with a beer

Pleading for another Merkel-led coalition

Facing his own internally divided party, the SPD's Olaf Scholz may well have needed a stiff drink before taking the stage on Wednesday in a beer tent in the Bavarian town of Vilshofen.

Scholz, who is in charge of the SPD until a new leader is appointed on April 22, appealed to party members to accept the proposed government deal, arguing the agreement to establish another Merkel-led grand coalition, known as a GroKo, was a good one.

In response to many younger members of the party who held aloft "NoGROKO" placards at the event, Scholz said the electorate would not forgive the SPD if it did not behave responsibly. Some 460,000 Party members will vote via mail on whether or not to approve the coalition deal.

Scholz has been tapped to take over as finance minister should SPD members give the GroKo government the go-ahead.

Angela Merkel past her prime?

These pleas, however, did not stop Scholz from taking a dig at the chancellor, likening her political fortunes to those of Horst Seehofer, the chief of the Christian Social Union (CSU), the CDU's Bavarian sister party, whose political star appears to be on the wane.

"Not only has a Bavarian politician very likely passed the zenith of his political career but also possibly a woman from the north,” said Scholz, referring to Merkel's birthplace in Hamburg, the city where he currently serves as mayor.

Although Seehofer looks set to become Germany's next interior minister, his political capital in Bavaria was damaged by the party's poor showing in the September 2017 general election.

The vote saw the CSU fall to its record-low result of 38.8 percent, down 10.5 percentage points from 2013, as it hemorrhaged support to the far-right Alternative for Germany (AfD), which gained 19.7 percent in the southern state. Merkel's own CDU also suffered losses, while the SPD earned its worst election result in party history.

Read more: 'The AfD is the new CSU' – How the far-right won big in Germany's Bavaria

Threat from the right

Meanwhile, Merkel's Union partner, the CSU, used its Ash Wednesday roast instead as a sober reminder to its members to be wary of the AfD. In the city of Passau, state premier-elect of Bavaria Markus Söder — who is taking over from Seehofer at the helm of the Bavarian government — made a rousing appeal to his followers, calling on them to recapture the political ground that the party had lost in the 2017 election. 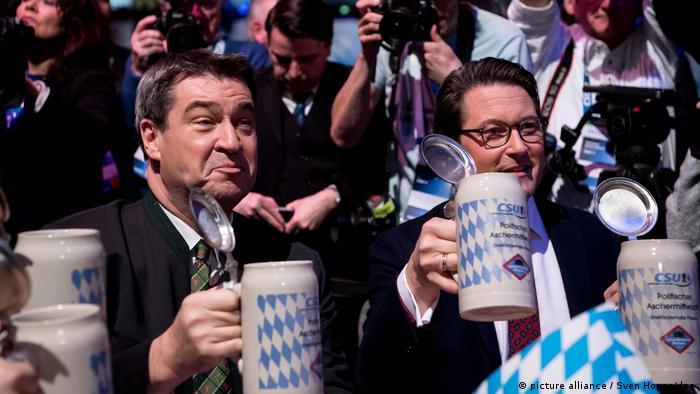 Söder stressed that the CSU, and the CDU-CSU Union as a whole, should not only hold the center ground of German politics but should seek to once again dominate the narrative on the right.

"The Union shouldn't just jostle for the middle ground and look over to the left," he said. Many in the CSU have expressed dissatisfaction at the potential government partnership with the SPD, as well as with the slow but steady shift leftward by Merkel's CDU in the previous government.

"We are there for the people in the middle, but we also want to reunite the democratic right," Söder said. "That doesn't mean a move to the right, but rather a return to old-fashioned credibility."

"It was a mistake to surrender to others those voters who are to the right of the center," he added, referring to the AfD's capture of 12.6 percent of the national vote. "The Union must make clear to voters that the AFD is no 'substitute union.'"

What's behind the Alternative for Germany's ballot box success? From Cologne to Dresden to Berlin, DW's WorldLink examines the phenomena behind the major parties' decline and asks whether money protects from populism. (29.09.2017)