Andrea Nahles would take the reins of a troubled SPD | Germany | News and in-depth reporting from Berlin and beyond | DW | 13.02.2018

Andrea Nahles would take the reins of a troubled SPD

Former Labor Minister Andrea Nahles looks set to be the first woman to head Germany's Social Democrats. SPD members are hoping that she can help reinvent the party within its new grand coalition government. 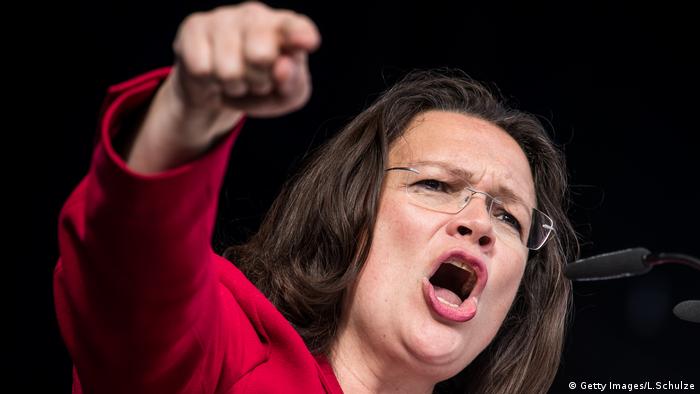 Andrea Nahles looks likely to become leader of the Social Democratic Party (SPD), taking over at least temporarily from Martin Schulz. Nahles had previously been named the head of the SPD's parliamentary party following last September's national elections. With Martin Schulz announcing his plan to step down as party leader, she has emerged the likely winner of the reshuffle at the top of German politics that unfolded in the aftermath of the new coalition contract agreed by the SPD, Angela Merkel's conservative Christian Democrats (CDU) and their allied Bavarian party, the Christian Social Union (CSU).

After its election fiasco in September and the more recent tortuous coalition negotiations, the SPD appears to have settled on Nahles as the party's latest great hope. The 47-year-old Catholic, a native of Rhineland-Palatinate, western Germany, has been burdened with the tricky task of renewing the party in government, rather than opposition.

Nahles' current strength in the SPD is the fact that, although she argued so passionately for the grand coalition, she is traditionally associated with its roots as a left-wing party that supports workers. She has built a reputation on boosting labor rights without alienating business leaders.

Significantly, Nahles first made a name for herself as the leader of the SPD's youth branch, the same post currently being exploited effectively by her in-party adversary: the leftist firebrand Kevin Kühnert, a 28-year-old politics student who leads the the Jusos (Young Socialists). 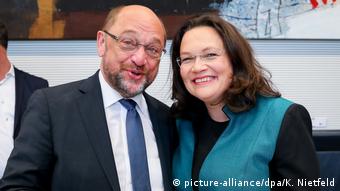 Nahles was born in Germany's western Eifel region in 1970, and — despite telling DW in a 1990s profile that she wanted a good degree to avoid a career in politics — she has found her metier as a career politician. In her high school leavers' magazine, she said of her career plans that she either wanted to be a "housewife or chancellor," only one of which has already been ruled out.

She joined the SPD at 18 and founded one of the party's local associations in a village near her hometown of Mendig. At university in Bonn, she studied German literature, philosophy and political science, and became leader of the Jusos in 1995. By 2009, she was general secretary of the party itself, and by 2013 the German labor minister in Angela Merkel's third cabinet.

It was in that position that she scored one of the SPD's biggest political successes by ramming home a national minimum wage in a CDU-led grand coalition — and in a country whose business leaders and trade unions have traditionally preferred to negotiate wage terms sector-by-sector.

All that makes it significant that, at January's special party conference in Bonn, it was Nahles — known for her blunt and passionate manner — who delivered the blazing six-minute speech that onlookers saw as the key to bringing a divided SPD round to coalition talks with Merkel. 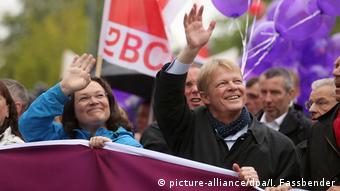 Marching on Labor Day: Andrea Nahles in her element

The theme of the speech was how even political compromises can bring real and important changes. "I'm in this party because I always saw something big in small things, very concretely, in progress for millions of people," she said, before pointing to the minimum wage that she had pushed through "like mad!" "People!" she continued, slapping her speech on the lectern in a rage, "we're not going to give up the SPD just because we're governing with others! We're going to negotiate till it squeals!"

It was not her first eye-catching oratorical performance. Back in the 2013 election campaign, when the SPD was still in opposition and railing against CDU inaction in government, Nahles mocked Merkel in the Bundestag by rewriting a line from the "Pippi Longstocking" theme song to make it fit the chancellor: "I'm making the world widdle widdle wid how I like it."

This casual bluntness has not gone down well in all quarters. In the aftermath of last year's bruising election night — when the SPD pledged to go into opposition against Merkel's CDU and Nahles was lining up to take over as the party's parliamentary leader — she made the front page of the mass-circulation Bild newspaper by promising that "as of tomorrow [the government] will get a smack in the mouth."

That drew criticism from the head of the German Protestant Church, Heinrich Bedford-Strohm, who lamented the gutter tone of modern politics.

Still, SPD insiders are now hoping that Nahles has the assertiveness the party needs in its quest to modernize. (The fact that she will be the first woman to lead the party in its 155-year history is a good start.) But they also want her to provide the kind of populist passion, not to mention purpose, that the center left of German politics has lacked for so long.

That would be a conundrum for Nahles as leader: How do you appear principled and new and yet still be willing to compromise with a conservative centrist who has been in power for over a decade? Despite the coalition contract, the SPD — still ailing in opinion polls — is determined to sharpen its profile to set it apart from the CDU.

In September, the SPD garnered just 20.5 percent of the vote, its worst-ever result, which pundits put down to a lack of new ideas after four years in an alliance with Merkel. The remedy, Nahles will say, was tough coalition negotiations that delivered the SPD new power for the next government — especially in its stewardship of the Finance Ministry. Now it will be up to her to wield it effectively.

Germany's SPD has voted to start formal talks for a new "grand coalition" with Angela Merkel's CDU/CSU. For many, the narrow vote has demonstrated that Schulz still has to prove he's the right person to lead the party. (21.01.2018)

The SPD is set to again come in second in the German election on September 24. Germany's Social Democrats are one of the world's oldest democratic parties. It looks back on a tumultuous history. (15.09.2017)