After protracted talks, Angela Merkel's conservatives have made a deal with the Social Democrats for a new coalition contract in Germany. The SPD confirmed this in a message to its members, who will have the final say. 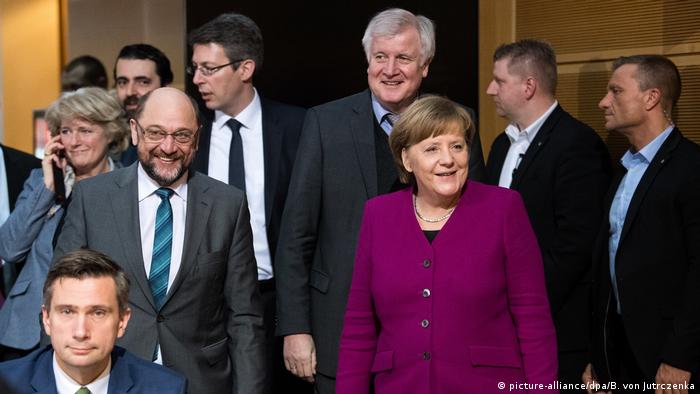 Negotiators from the Christian Democratic Union (CDU); their Bavarian partners, the Christian Social Union (CSU); and the center-left Social Democratic Party (SPD) have finally hashed out a contract for a new grand coalition government — probably ensuring that Angela Merkel will stay in office for a fourth tenure as German chancellor.

The SPD leadership confirmed initial reports of a deal in a group WhatsApp message to its members: "Tired. But satisfied," it said, adding that final details were now being added to the text of the contract, which would then be assessed by the SPD negotiating team.

"It was high time that we got the prospect of a government," the CSU's parliamentary leader, Alexander Dobrindt, said as he left CDU headquarters in the morning after the negotiators had worked overnight.

One of the last major hurdles was the allocation of ministerial posts, always a thorny issue and typically among the last detail to be confirmed.

Early reports suggested that the SPD would be handed the Finance Ministry — a major victory for the party — while CSU leader Horst Seehofer, one of the most conservative figures on Merkel's side, would become interior minister. The SPD also look set to keep control of the Foreign Ministry and the Labor Ministry, with party leader Martin Schulz reportedly keen to be foreign minister. This means that Merkel's CDU looks like it has given up key positions to keep its allies happy.

SPD negotiators have spent the weeks leading up to Wednesday's deal trying to convince skeptics within party ranks that they had won significant concessions from their conservative partners. SPD members will have the final say on whether to accept the coalition agreement in a vote to take place by post in the coming weeks.

Regional party officials have reported several thousand new members joining the party ahead of the vote, taking the ranks past 460,000. If the voters approve the deal — and it could well be close — Merkel could then appoint a Cabinet and the parties could sign the coalition contract. Then, if all goes to plan, Germany would have a new government by Easter. 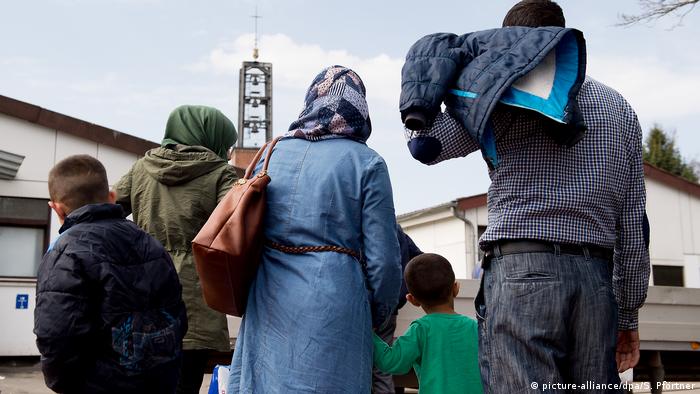 What's included in the deal?

Here are the key points agreed in the draft coalition contract:

Health insurance: The three parties have agreed to set up a commission tasked with producing proposals for a reform of doctor fees for public and private treatment. This is something of a compromise for the SPD, which had been pushing for "citizens' insurance," which would have ensured a basic standard of treatment for everyone, regardless of whether they were publicly or privately insured.

Labor market: The SPD won one of its key points by ensuring that labor contracts can only be time-limited if the employer gives a specific reason. There will also be a specific program aimed at getting 150,000 long-term unemployed back into work, and a right to switch back from part-time back to full-time employment.

Immigration: One of the most contentious issues was dealt with fairly early in negotiations: The two sides agreed  last week that the number of immigrants brought to Germany via family reunification would be capped at 1,000 a month (for those with subsidiary protection) — the same figure that was set out at the end of exploratory talks a few weeks ago — and that the current suspension on reunions would end on July 31. Cases of "extreme hardship" would also be allowed to apply for family reunion, beyond the quota.

Refugee rights organizations such as Pro Asyl argued that this was a cosmetic difference anyway, as the exception has already been in place for the past two years and was only invoked in about 100 cases last year. Hundreds protested outside the Reichstag in Berlin last week as the measure was passed in parliament.

Arms exports: The two sides have agreed to tighten Germany's arms export controls — last updated in 2000 — and will specifically exclude all countries taking part in the war in Yemen. This would be a significant change, as it would mean that Saudi Arabia, historically one of the best customers for German arms outside the EU and NATO, will no longer be receiving German weapons. However, Iraq and Turkey - both countries fighting Kurdish armies - will still be able to buy German weapons, and peace activists are angry that old deals will still be honored.

Europe: The three parties have agreed that the European Union needs "more investment," specifically in the shape of an investment budget for the eurozone. That deal was celebrated by the SPD as "an end to the austerity mandate" across the European Union, but it remains to be seen how the details pan out. The parties also promised a special focus on reducing unemployment among young people and "fair taxation of companies — especially the internet giants Google, Apple, Facebook and Amazon in Europe." 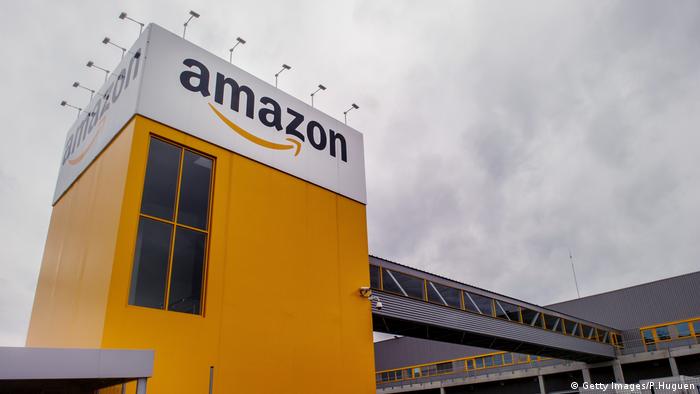 Will Amazon have to pay more taxes?

Housing: The SPD claimed a victory in combating an urgent problem in many of Germany's urban centers: unbridled property speculation, which has led to rising rents, a shortage in affordable housing and increasing homelessness.

In fact, that gain mainly amounts to a slightly tougher rent cap, which would force landlords to disclose the previous tenants' rents. Renter-rights organizations have already said the idea doesn't go nearly far enough. "That's as good as nothing at all," Reiner Wild, head of the Berlin renters' association, said of the modification — what was needed, he added, was the threat of real punishment for landlords who violate the cap.

Schools: Apart from an €11 billion ($13.6 billion) package meant to boost Germany's investment system, the two sides have agreed to lift a so-called cooperation ban, which stops the federal government from investing in schools — something that is supposed to be an exclusive purview of the states.

Climate: The CDU and SPD negotiators agreed that Germany would stick to the international climate goals in 2030 and 2050. A special commission would be tasked with coming up with an "action plan" by 2018 on how to hit those targets, with each department — transport, agriculture, etc. — obliged to set its own goals. But this, climate activists argued, was the least the parties could do. Environment Minister Barbara Hendricks, of the SPD, has already admitted that Germany will almost certainly miss its own emissions reduction target for 2020: a 40 percent reduction on 1990 levels. The Greens have described the new coalition deal as a "sabotage" of Germany's climate goals. 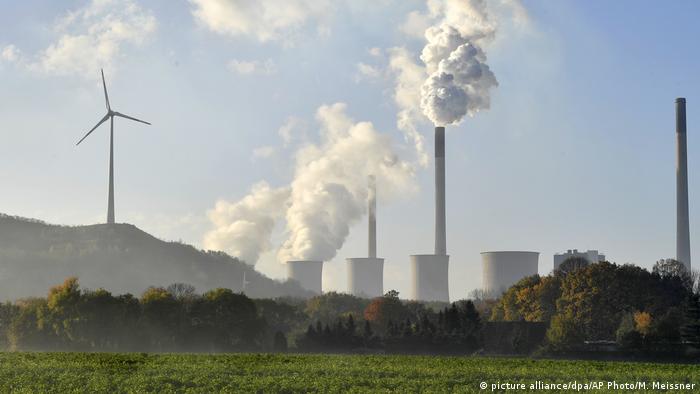 Digitalization: Here, the two parties agreed to a "billion-euro program" to extend Germany's broadband reach to close gaps in a country where many rural areas do not have adequate online access. There will, the working group promised, be "a right to a fast internet by 2025" — in other words, a law guaranteeing all Germans broadband internet connection. The plan has been criticized by Bitkom, the IT sector industry association, which said the obligation would only hold back internet providers.

Agriculture: The pesticide glyphosate, a source of much friction between the CSU and SPD , will be banned, along with genetically modified crops. On top of that, the two parties agreed to limit animal experiments and to introduce a new "animal welfare label" to help ensure better conditions in industrial farming. That measure was already being planned by current Agriculture Minister Christian Schmidt of the CSU.

Germany's two largest parties have formally launched talks to form a new government after September's elections. Party leaders were upbeat about the prospect of a grand coalition in the run-up to the talks. (26.01.2018)