The young SPD politician who could topple Angela Merkel and Martin Schulz | Germany | News and in-depth reporting from Berlin and beyond | DW | 18.01.2018

Meet Kevin Kühnert, the university student who could take down not only his party leader but also the German chancellor. He's the unlikely head of the opposition to the SPD pressing forward with a new grand coalition. 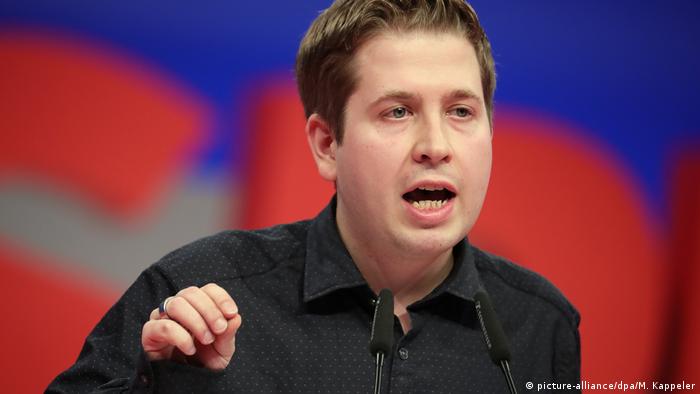 At the age of 28, the leader of the Social Democratic Party's (SPD) youth wing, the Jusos, is perhaps an unlikely figure to lead a political revolution. But despite pressure from both inside and outside his party to drop his opposition to a continuation of the current grand coalition between the SPD and Angela Merkel's conservatives, Kevin Kühnert is sticking to his guns.

"You can't find anyone [within the party] who's excited about entering into another grand coalition," Kühnert told reporters in Berlin on Thursday, saying that he would continue to encourage the SPD to halt talks with conservatives at the party's special convention in Bonn on Sunday.

The 600 delegates to that conference, whose numbers will include 80 to 90 Jusos, have the authority to approve formal coalition talks with Merkel's conservatives or halt them entirely. Should the delegates vote no, it would probably mean new elections for Germany, most certainly the resignation of SPD chairman and former European Parliament President Martin Schulz and, conceivably, the end of Merkel's chancellorship.

It could also mean another electoral debacle for the SPD, which is currently down to 18.5 percent in public opinion polls. Kühnert said he was willing to take all of these not inconsiderable risks in the interests of making the SPD competitive and returning it to its core left-wing principles, which he feels have been watered down by the party's cooperation with Merkel in centrist coalitions.

"The SPD is in a nasty situation," Kühnert said. "No matter what we do, some people are going to feel affronted."

Kühnert said that the result of Sunday's party vote, upon which so much depends for political Germany, was "completely open," adding that he was optimistic he and his supporters had "a realistic chance of winning the vote."

After the SPD's historic thumping in Germany's national election last September, defeated chancellor candidate Schulz announced that the party would not renew its partnership with Merkel and instead head into the opposition. But he changed his tune in late November, after the conservatives failed to reach consensus with the Greens and the pro-business Free Democrats; Schulz has been advocating a grand coalition ever since.

Kühnert became head of the Jusos just as Schulz announced and tried to defend the about-face, and from his first moments in the job, the 28-year-old has held the SPD chairman to his original word. Arguably it's why he was elected head of the Jusos, with 75 percent of the vote from that group's members.

An idealist takes on the party establishment 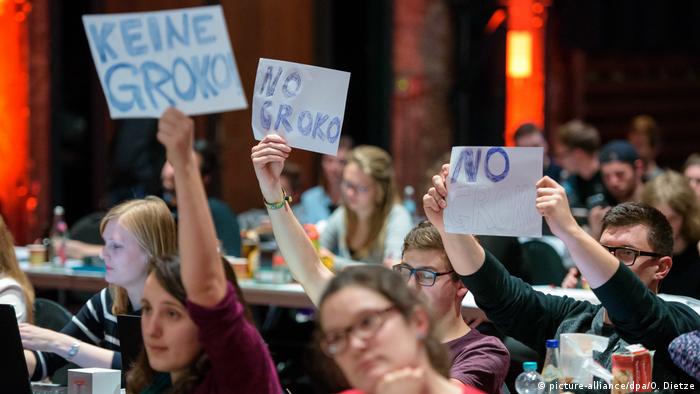 There's something archetypal about the young-versus-old, David-versus-Goliath showdown that will play out at the SPD party conference in Bonn on Sunday.

On the one hand there's Martin Schulz, the 62-year-old former president of the European Parliament, a political veteran in tailored suits and ties. On the other is Kühnert, a 28-year-old who studies political science at university, who insists that the SPD advocate comprehensive public insurance and income equity, and who holds press conferences in jeans and untucked shirts. It's a combination of lack of pretension and idealism that has proven infectious.

"What the SPD actually has to ask itself is what sort of party it wants to be in the future?" Kühnert said in Berlin. "How can it break through the vicious circle of always being in a grand coalition? With what sort of policies does it want to get people in Germany fired up?"

Kühnert is quick to protest that he is not calling upon anyone to resign, including Schulz, but it is hard to see how the SPD chairman could stay on, if delegates on Sunday reject his recommendation to pursue coalition talks.

For that reason, the SPD leadership is taking the challenge posed by the upstart very seriously indeed. Before Kühnert's press conference, the Juso head was attacked by the second most important figure in the SPD, parliamentary group leader Andrea Nahles, who accused him of making factual mistakes — something Kühnert disputes.

Kühnert is keen to portray his rebellion as part of a healthy culture of debate and dissent within the SPD and, by extension, as a sign of the party's vitality. At the same time, if he succeeds in scuttling the grand coalition, and Germany heads back to the polls, the Social Democrats may find themselves in a weaker position than they are now.

Kühnert argues that the SPD has to risk a further decline in a new election to reach out to people who have "lost trust" in the party in the course of two grand coalitions in the past 12 years. The SPD has dropped nearly 15 percent in election results over that period.

Read more: The pros and cons of Merkel's grand coalition in Germany

"I can't guarantee that it's going to work," Kühnert said. "But the path we've chosen in recent years hasn't been rewarded. Entering into one grand coalition after another because we fear the alternative only makes the SPD smaller and smaller. That's why I'm for breaking through this vicious cycle now, accepting the pain it may bring and expanding our perspective for a reorientation of the party."

But it's not just the left that could be taken apart by Kühnert's idealism. Amidst the ongoing youth trend among European leaders, including conservatives, there is no guarantee that the result of fresh elections would be another term in office for Angela Merkel.

The fate of Europe's longest-serving leader thus might just depend on a political science student from Berlin, who was an utter unknown a few of weeks ago.