A coalition with Angela Merkel's conservatives? No thanks! That's how the regional SPD conference in the eastern state of Saxony-Anhalt voted, against its own leaders. Sabine Kinkartz reports from Wernigerode. 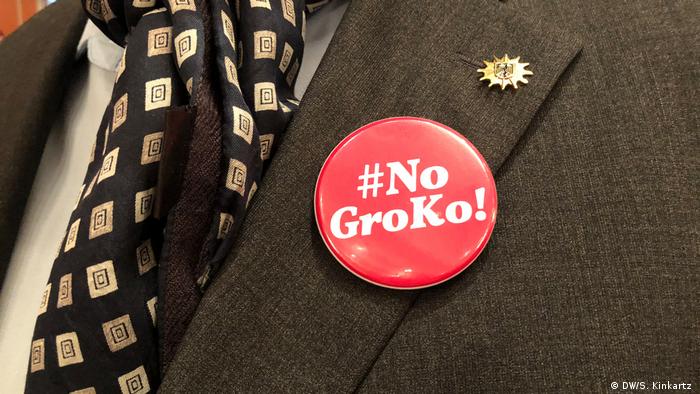 When German Foreign Minister Sigmar Gabriel arrived at Wernigerode's congress center to attend the annual conference of Saxony-Anhalt's Social Democratic Party (SPD) on Saturday, the youth branch of the party had already made its position clear. "Grand coalition, no thanks!" was the title of a two-page paper calling on the conference to officially oppose a new coalition with Angela Merkel's Christian Democrats (CDU) and Bavarian Christian Social Union (CSU).

The fact that Saturday's conference did indeed decide against such a coalition does not have a binding effect, because the final decision will be taken at a national SPD conference on January 21. But it does send a clear signal to the entire party.

Gabriel's mission was clear: He thinks the outcome of exploratory coalition talks between the three parties, which have just been concluded in Berlin, was a good one, and he wanted to gain support for it. The agreements made at the talks were collated in a 28-page document, copies of which were hastily distributed among the 120 delegates attending Saxony-Anhalt's SPD party conference. And unlike Gabriel, many, it seems, were disappointed.

Anne Fiebig heads the party's youth organization, the so-called Juso, in Halle (Saale) and complained that "many decisions made at the last party conference were simply ignored." She said "the document does not afford any importance to social justice at all." Fiebig sported a large red button-shaped badge reading "#NoGroKo," indicating her opposition to yet another "grand coalition" ("GRosse KOalition" or "GroKo" in German). 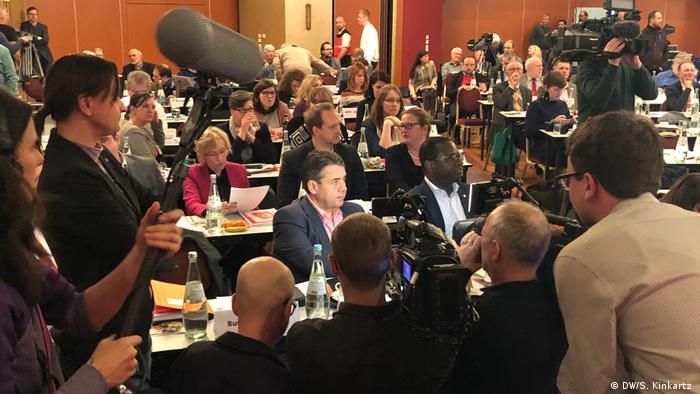 Many other delegates wore this badge, too. Susi Möbbeck, who serves as a state secretary at Saxony-Anhalt's Ministry for Labor, Social Affairs and Integration and acts as the regional integration officer, did not. But she, too, was skeptical whether her party should form a new coalition government.

Möbbeck said the document contained "several new approaches" that could be "further developed," but thinks the paper's stance on "migration politics is catastrophic." She did not expect this, she said. "It's shocking to see that the CSU has largely been able to dictate its tough stance on migration." This, she thinks, is the concession that the CDU and CSU demanded from the SPD. Now, "refugees pay the price."

Gabriel understands this criticism, but showed he was largely content with the agreements outlined in the paper. For almost an hour, he addressed his fellow party members, denying that the CDU and CSU had dictated the terms of the exploratory agreement.

"The document contains many sensible things. The fact that it lacks other things is clear, but we shouldn't act as though everything is bad," he said. He bemoaned the fact that merely considering any form of political compromise today already meant "falling into disrepute" inside his own party. "It's instantly equated with betrayal," he said.

"What we can debate is whether this is enough to give us a distinct profile," Gabriel said. "Do we get enough from it to maintain our individuality and to assist us on the path of renewal that we must take to become stronger once more?"

Gabriel's core message was that being in opposition is not a recipe for success. "Do we think we will become stronger if we say [...] that we won't ensure health insurance is equally financed by employees and employers? And if we don't oppose state pensions being lowered? Will we gain strength if we don't fight for all-day schools or if we don't see to it that the EU gets more money?"

Gabriel said he was certain SPD voters would not understand if the party completely rejected any cooperation. "I would not want to risk such an experiment because it leads to fresh elections," he said.

Gabriel said he did not welcome the fact that a special party conference in Bonn would decide on whether to start formal coalition talks. He thinks it would have sufficed to ask party members after formal talks were concluded.

A vote of no-confidence could further obstruct things, he said, complaining in his speech that there was a "growing distrust between the rank and file and the SPD's leadership."

That could destroy the party in the long run, he said. 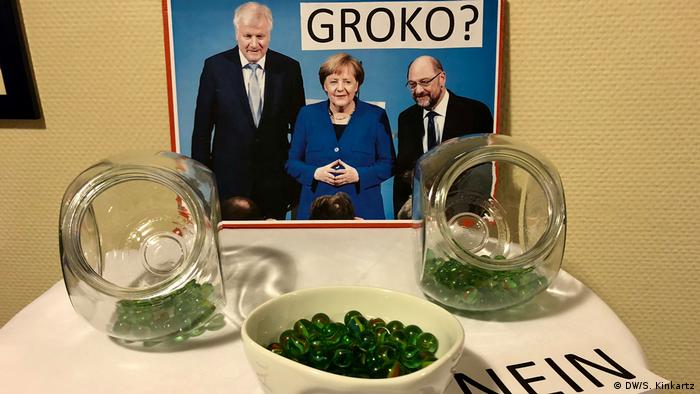 The issue of the grand coalition has split the SPD. Yes or no?

Young SPD members in particular have rejected this reasoning. The party's youth wing, the Juso, hopes delegates in Bonn will vote against forming a new "grand coalition." Juso chairman Kevin Kühnert has declared he will tour through Germany prior to the Bonn party congress to drum up opposition against a new "grand coalition." That's why he also stopped by in Wernigerode, he said.

Over the course of 20 minutes, Kühnert dissected and dismissed the agreement fleshed out in the exploratory coalition talks. He claimed the SPD's leadership was touting the deal as a success because negotiators put in an all-nighter to finish the paper.

"That's understandable from a psychological perspective — but the agreement should be judged on its content and not on how strenuous negotiations turned out to be," he said.

Kühnert complained that not enough typical SPD issues were included in the deal, while others were things the CDU and CSU had already promised the SPD in the 2013 coalition agreement but were never realized. 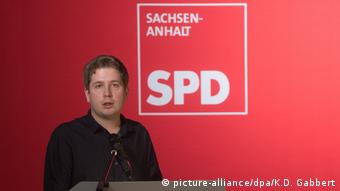 Kühnert is a vehement opponent of the 'grand coalition'

Kühnert also said the document de facto enshrines a cap on the number of refugees allowed into Germany. "It says that no more than 180,000 to 220,000 individuals will be let in per year. It does not say 'should not be let in' or that this 'could' be so. It stipulates a maximum of 220,000 individuals and that essentially means a cap," he said.

Kühnert's arguments struck a chord with the Wernigerode delegates, who feverishly applauded his talk. They particularly welcomed his criticism of the party leadership's behavior after the exploratory talks were concluded. "I would have appreciated it if they hadn't issued a jubilant Power Point presentation and some whitewashed press release, but instead had been open about what worked out and what didn't," he said.

All options no longer on the table

Kühnert believes SPD leaders abandoned their earlier promise to hold talks with the CDU and CSU without any particular outcome in mind. "That was a way to ensure support at last December's party conference," he said. There was no more talk of possibly tolerating a CDU/CSU-led minority government, Kühnert noted, simply because the conservatives had rejected the idea. "I would have liked to see the SPD make it much tougher for the CDU/CSU to get out of that tricky situation."

Two hours later, the delegates in Saxony-Anhalt voted on the motion opposing the "grand coalition" that had been presented by the Juso. One out of two delegates cast ballots supporting the motion.

The vote is a warning to SPD leaders in Berlin, as it shows that the party is completely split. Those in favor and those against the "grand coalition" will use the week ahead of the Bonn conference to argue their cases. The suspense continues.