Germany's biggest political parties want to end their marriage of necessity, but is a grand coalition actually such a bad thing? Experts say that the current arrangement has more going for it than is sometimes thought. 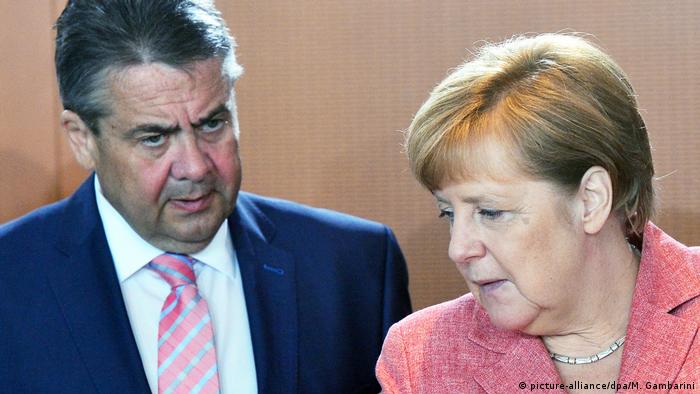 It's logical in an election year that none of Germany's political parties has many kind words for the grand coalition. Even the coalition partners, the conservative CDU-CSU and the Social Democrats (SPD), will now campaign against its continuation, having put forward all the remaining legislation they can agree upon. In particular, the current junior partners, the SPD, hope that their new chancellor candidate Martin Schulz can help them escape the shadow of Chancellor Angela Merkel's CDU.

But the fact is that despite what party leaders say during the campaign, a grand coalition remains a possible outcome after the German national election. The parties and their most faithful supporters may hate that constellation, but the electorate doesn't. Voters in Saarland indicated such a preference earlier this week. And in a survey earlier this month by the pollsters Forschungsgruppe Wahlen e.V., some 70 percent of those asked said they thought the work of the government was more good than bad.

Other surveys suggest slightly more disharmonious attitudes toward the status quo. In a recent poll by Infratest-Dimap, 55 percent of party supporters, who are also likely voters, said they were dissatisfied.

So what is the legacy of the current grand coalition? Does it deserve to be swept away in favor of a government with a clearer right- or left-wing thrust? And will it? DW asked Müller-Vogg and two other leading experts. A carnival float depicts the relationship between the coalition partners

For a marriage of necessity, the government did get a lot of legislation through the Bundestag in the past four years.  Initiatives include everything from expanding dual citizenship, finalizing Germany's phase-out of nuclear power, establishing a minimum wage in Germany and allowing some people to retire at the age of 63.

"In terms of output, it was a completely acceptable result," says Uwe Jun, a political scientist at Trier University. "The grand coalition achieved a lot for the German population."

Detractors counter that the government's legislative successes came on small "no-brainer" issues likely to attract broad public support, such as heavier punishments for burglars or steps to prevent abuses of the social welfare system. By contrast, truly tough topics like whether Germany should have a law regulating immigration or how to finance the pension system as the population ages in the future get ignored.

"The grand coalition is always a compromise in which the parties agree to avoid conflicts, even limited ones," explained Gero Neugebauer, professor emeritus at Berlin's Free University.

A grand coalition is thus a good instrument for turning political consensus into reality. But it's questionable how much common ground the CDU-CSU and SPD have left to pursue after four years of cooperation. On the other hand, pushing through legislation is only one aspect of governance. 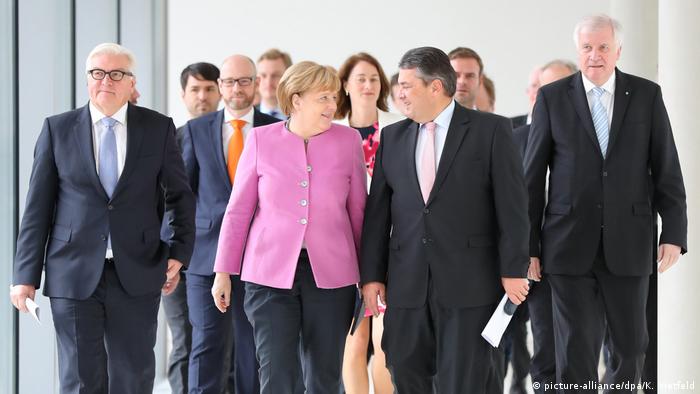 In general, political scientists give the Merkel-led government high marks for how it handled day-to-day decision-making and responded to emergencies.

"The grand coalition made the public feel that its governance was solid and that there was no reason to get upset," Neugebauer said. "Angela Merkel enjoyed steady positive ratings. She only dipped in relation to the refugee crisis where she couldn't explain how Germany was going to be deal with it. That wasn't very good crisis management."

Müller-Vogg agreed with that assessment.

"The daily business of governing went well," the journalist and author explained. "Only at the height of the refugee crisis, when the government seemed to lose control and when the people realized that there were consequences to welcoming so many migrants, did the government fail to project a positive image."

The government's handling of the refugee crisis was, at least partly, responsible for the temporary ascendency of the right-wing populist Alternative for Germany (AfD). And that points up a major disadvantage of grand coalitions. Grand coalitions can lead to the formation of extremist parties

The need for conflict:

"A grand coalition limits the give-and-take between government and opposition, which is one of the main characteristics of a liberal democracy" said Jun.

The lack of quarrels between the political heavyweights can lead to fatigue and boredom in the mainstream. The end result can be a change to the overall political landscape.

"One argument is that a grand coalition prevents controversial topics from getting addressed," Neugebauer said. "That falls to smaller, radical parties, who sometimes for that very reason come into existence."

The AfD can be seen as one example of that phenomenon. Ironically, though, the presence of the populists might be one factor encouraging the formation of another grand coalition after Germany's national election in September. 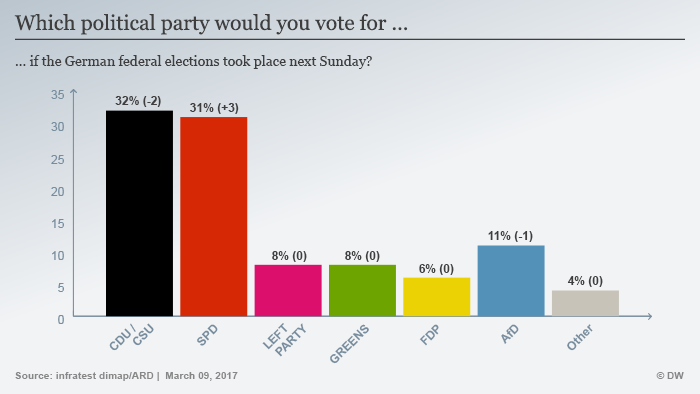 Neugebauer points out that the junior partner in a grand coalition is always, in a sense, the "loser," who gets less credit for the positive things the government does. With that in mind, Schulz and the SPD have a greater interest in an alternative to the status quo than Merkel and the CDU.

But the Social Democrats may not get any option, with the political pariahs of the AfD swallowing up a significant percentage of the vote according to polls. Putting together a stable parliamentary majority won't be easy without the help of the other large party.

"The grand coalition would be the final option for both of the parties, if nothing else was possible politically," Müller-Vogg. "But as it stands now, a coalition of the SPD, the Greens and Left Party would only have a majority of a couple of seats. The Social Democrats wouldn't risk that. If you only have a margin of, say, ten seats, there's no need to even try it, regardless of the constellation."

- Opinion: Schulz has not beaten Merkel yet

- What the terms right and left mean in the German election

- Seehofer and Merkel look to mend fences over refugees

For the moment, no SPD leader would be caught dead admitting that there was a possibility for four more years of conservative-Social Democratic government. But as Jun points out, the new man at the helm has a history of cooperating with nominal adversaries.

"Martin Schulz isn't someone who would rule out a grand coalition, because he's very familiar with this sort of constellation," Jun said. "In the European Parliament, he always had a grand coalition."

All three political analysts agree that for the moment, a wide variety of governing coalitions, including the present one, remain possible. So despite all the calls for change, after September Germany could still get a government that looks remarkably familiar.

Find all of DW's coverage on the 2017 election here.