German election: What do the terms 'right' and 'left' mean, if both CDU and SPD are in the center?

Angela Merkel and the CDU have moved away from conservative positions and the SPD has disenchanted working class voters. In the German election the difference between right and left has become blurred. 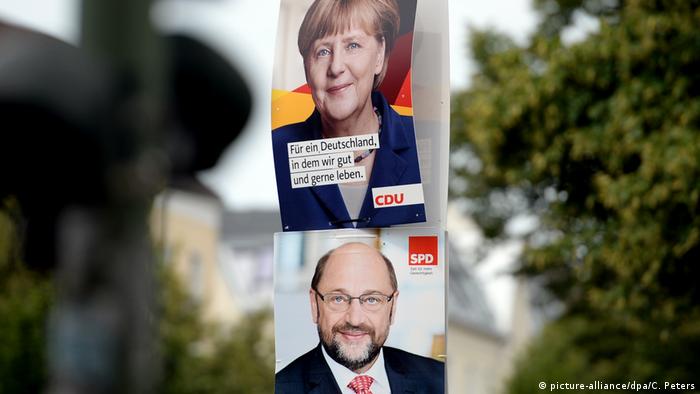 Old habits die hard. In the eyes of newspapers including the Washington Post, the revival of the Social Democrats (SPD) in the polls in early 2017 after nominating Martin Schulz as chancellor is a sign of the "resurgent left." Conversely, the Alternative for Germany (AfD) is most frequently treated as part of a global "right-wing populist" trend that also includes the Brexit and Donald Trump's election victory in the US.

According to the polls, six parties are likely to be represented in the next German parliament after the national election on September 24: the center-right CDU-CSU,the center-left SPD, the right-wing AfD, the Left Party, the leftist Greens and the liberal Free Democrats (FDP).  How comfortably can the left-right schema be applied to this political spectrum?

And do Germans mean the same things by right and left as, for instance, Americans do? The meaning of the terms, which originated in the French Revolution of 1789, have changed throughout the ages and vary from culture to culture. And right now they appear to be going through another significant paradigm shift.

Two causes for this development seem particularly prominent: the Social Democratic drift of Germany's conservative chancellor, Angela Merkel, and the resurgence of populist nationalism in the US and elsewhere. Those and other factors make it increasingly difficult to speak of any consistent right- or left-wing outlooks, as a number of examples suggest.

Traditionally, the conservative CDU-CSU has been both the most nationalist mainstream political party and the one that supports the tightest connections with NATO. For a long time, conservatives rejected the notion of Germany as a country that sought to attract and integrate immigrants. That largely changed with Merkel. Under her leadership, the conservatives have not only adopted a welcoming stance toward refugees, but also come to see immigration as crucial to Germany's future - even if a slight majority still resists the idea of dual citizenship. 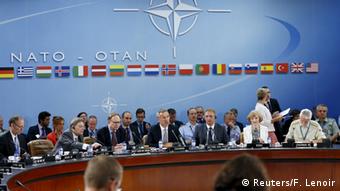 The old political divisions over NATO are disappearing

That has opened up political space for the nationalist-populist AfD, whose members are hostile not just to refugees but to immigration in general. "Germany for Germans" is the motto, and AfD leaders have frequently used racist language.

In reaction to Trump's questioning the value of NATO for the US, the SPD and the Greens have joined the conservatives in supporting the military alliance - traditionally not exactly a left-wing position. The Left Party, which has its origins in the ruling Socialist Unity party of formerly Communist East Germany, is anti-NATO and supportive of Russia, whereas the SPD and the Greens are highly critical of Vladimir Putin.

The ostensibly far-right AfD wants to reduce NATO to a purely defensive alliance and withdraw German troops stationed abroad. And like Trump, it has a lot of time for Putin - the party platform calls for Russia to become a "friend" to Germany in the same sense as the US. Polls indicate that the party is popular among immigrants to Germany from Russia (the so-called "Russian Germans") - another indication that the right-left foreign policy split from the Cold War is being erased.

The European Union and trade agreements

The split on policy toward the EU runs not between right and left but between the center and the extremes. While the conservatives, the SPD, the Greens and the FDP are firm supporters of the European bloc, the AfD wants Germany to leave both the EU and the Euro, and the Left Party's attitude is ambivalent. Left Party leaders have cast the Brexit as the result of social inequities within the EU and have argued for drastic revisions to the EU treaty. 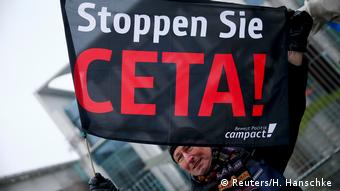 Trade deals, like CETA, are opposed on the right and left

It is perhaps no surprise that the business-friendly CDU-CSU and FDP come out in favor of international trade agreements like TTIP and CETA. What fits in less well with traditional categories is the fact that the AfD, the Left Party and the Greens oppose them, as does Donald Trump, albeit for wildly varying reasons. And SPD leaders, most prominently former Economy Minister and current foreign minister Sigmar Gabriel, have vigorously supported international trade deals despite fears that they would disadvantage working people in Germany.

This is one area where the traditional understanding of right and left still largely seem to apply. Generally speaking, the CDU-CSU and the FDP are for low taxes and fiscal austerity and against government regulations on business, while the SPD, the Greens and the Left favor a government that actively seeks to redistribute wealth. On the whole, even conservative German tax policies would be considered left-wing in the US, where distrust of government spending runs high.

The AfD's economic policies are a mixed bag. On the one hand, the party supports traditional right-wing policies like hostility to state subsidies, upper limits on income taxes and balanced budgets, but they also oppose privatization of government properties and would introduce independent tests of products to hinder companies from engineering obsolescence. The AfD also favors extremely generous social benefit programs for families.

The AfD supports law-and-order positions familiar from the US straight across the board, but strangely their short party platform never mentions the word "terrorism." The CDU-CSU wants to bolster the police and the intelligence services in the interest of fighting terrorism, while the Left and the Greens oppose increased state surveillance. The SPD is rather ambiguous on the issue - perhaps because as the junior member of the governing grand coalition, it has gone along with traditionally conservative law-and-order measures. Surveillance is another issue that splits German parties along unfamiliar lines

The great anomaly, at least in comparison with the American political landscape, is the FDP, also known as the Liberals. Germans don't use the word as a somewhat pejorative synonym for the (far) left, but rather to indicate strong support for both political and economic individual liberties. Thus, a "liberal" in Germany has more in common with a libertarian than, say, Bernie Sanders.

The traditional equation here is that right-wing parties defend the interests of established elites while left-wing ones act as advocates for the disadvantaged. Those categories used to be defined first and foremost by class. But the populists have staked a claim to being the exclusive spokesmen for the proverbial ordinary people, excoriating even the advocates of the disadvantaged as elite beneficiaries of a corrupt system. Here, too, the split is less between right and left than between established political forces and newcomers.

Anti-elitist rhetoric is omnipresent in the AfD. Indeed it is arguably the party's raison d'etre. The Left Party also occasionally rails against elites, as do some figures in the SPD, whereas the Greens tend not to.

These are the bread-and-butter issues of the Green Party, of course, but the historic right-left divide on environmental and energy issues is just that - a thing of the past. Angela Merkel's decision in 2011 to advocate the discontinuation of nuclear power in Germany aligned the conservatives with positions usually associated with the left.

That's opened up political room for other parties. The AfD wants to completely reverse Germany's energy policies, extending the operational lives of the country's nuclear power plants and doing away with government incentives for renewable energy sources. The FDP also wants to overturn Germany's Renewable Energy Law. The SPD and the Left support Germany's current energy policy, although it's not a priority for either party.

The center-left SPD has been surging in polls since Martin Schulz announced he's running for chancellor, while Merkel's conservatives are losing support. A new poll shows growing SPD support particularly among one group. (13.02.2017)

Leading members of the SPD have hit back after Germany's finance minister said candidate Martin Schulz's speeches were akin to the populist rhetoric of US President Donald Trump. Elections are due in September. (11.02.2017)

Germany's finance minister compared the rival SPD's candidate for chancellor, Martin Schulz, to US President Trump. Schulz's supporters said the statement shows how out of touch the minister is with voters' concerns. (10.02.2017)