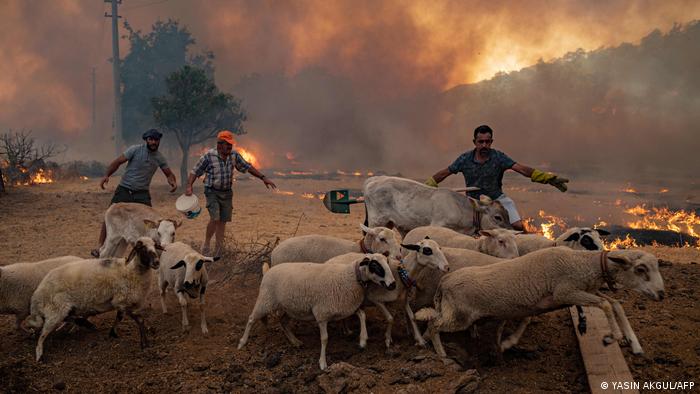 Sheep are shepherded away from an advancing fire in Marmaris in western Turkey, a region struggling against its deadliest wildfires in decades

Wildfires burning across southern Europe in the last month — whether sparked naturally by lightning, or by arsonists — have been fanned by drought and extreme heat.

Scientists have no doubt that climate change is the key driver of yet another extreme fire season. They also understand that climate adaptation in fire-prone countries is inadequate to deal with wildfires that are set to worsen.

We look at why Mediterranean and Balkan countries are so prone to wildfires and explore the consequences of a warming world.

1. Why is the Mediterranean region burning now?

Summer wildfires are a natural and often necessary part of the life of Mediterranean forests. In the decade before 2016, around 48,000 forest fires burned 457,000 hectares annually across the five southern European nations where wildfires are most prevalent: Spain, France, Portugal, Italy and Greece. According to the scientists, fire can also breed renewal and foster biodiversity in these regions.

Indeed, communities have learned to cope better with the average annual fires in hot and arid regions across southern Europe, with more sophisticated fire prevention strategies leading to an overall decline in the number and size of fires since 1980.

But too often in recent years, fire events have escalated way beyond their normal size and intensity.

Devastating 2017 and 2018 wildfires claimed hundreds of lives across an area stretching from Turkey to Spain, while countries in central and northern Europe, including Sweden, were also scorched.

Such unprecedented fire events are inevitably linked to extreme droughts and heat waves.

2. What is starting the fires?

The month of July was the second-hottest ever recorded in Europe (and the third hottest globally). The south of the continent has been the focus of this extreme heat, with temperatures in Greece this week expected to peak at 47 degrees Celsius (117 degrees Fahrenheit).

Greece and neighboring Turkey are in the midst of a heat wave that could be the worst in 30 years — invoking memories of the nightmarish 1987 fire season that claimed more than 1,500 victims in Greece alone.

In Turkey, almost 200 separate wildfires have raged through the country in just over a week, forcing some coastal residents and tourists to flee into the Aegean for safety.

So while arson and natural causes such as lightning are equally to blame for starting the fires, extreme heat has increased their intensity and is the real culprit for the destruction wreaked across fire-hit regions. This is why at least 55% more area has burned across Europe by August 5 than the average over the previous 12 years.

This fact is compounded by outdated forest management, and sometimes even the over-protection of natural forests.

A fire on August 1 blazed through the Pineta Dannunziana, an urban pine forest in the Italian city of Pescara, forcing 800 people to evacuate. But because the area is a protected nature reserve, it is not subject to forest management such as regular clearing of undergrowth or being subjected to controlled burns. "The undergrowth burned very quickly," said Carlo Masci, mayor of Pescara.

Meanwhile, existing fire suppression policies do not account for the impact of global heating on the flammability of areas where wildlands (sometimes grown up on abandoned agricultural land) and expanding urban centers more commonly interface. This was evidenced by the flaming outer suburbs of Athens this week.

"In most Mediterranean regions, the current wildfire management policies are generally too focused on suppression and are no longer adapted to the ongoing global change," wrote the authors of a 2021 study on "Understanding Changes to Fires in Southern Europe."

3. So what has climate got to do with it?

While the burned area of the Mediterranean region has decreased slightly over the last 40 years, this is mainly due to more effective fire control efforts, according to the European Environment Agency (EEA).

Global heating increases the frequency and severity of fire weather conditions globally — as witnessed during the unprecedented wildfires across Australia and California in recent years. And inevitably, climate change has increased forest fire risk across the whole of Europe, including central and northern regions that are not typically fire-prone.

The current record droughts and heat waves across the Mediterranean region echo the events of 2018 when "more countries suffered large fires than ever before," according to the EEA.

In Greece, more than 100 people died in the so-called Attica fires of 2018 — the second-deadliest fire event this century after the 2009 "Black Saturday" fires in Australia.

"An expansion of fire-prone areas and longer fire seasons are projected in most European regions," stated the EEA.

Carbon emissions are not decreasing fast enough to limit this heating, despite climate agreements such as the European Green Deal and Paris Climate Accord.

"They put out plans, they define goals, but they don't really act," said Mojib Latif, a climate scientist at the Helmholtz Center for Ocean Research. "Since 1990, global carbon emissions increased 60%," he told DW, adding that emissions will rise again in 2021 following the pandemic-related slowdown the previous year.

4. What are the global climate change repercussions?

Globally, wildfires are responsible for significant greenhouse gas emissions, and for 5% to 8% of the 3.3 million annual premature deaths from poor air quality, according to climate group Carbon Brief.

But carbon emissions from wildfires have been on the decline in recent decades. This again is due to improved fire prevention.

The problem remaining is fire severity or intensity, which has a more far-reaching effect on carbon sequestration since forests burn so badly that they do not regrow.

In 2017, CO2 emissions from extreme wildfires across southwestern Europe (namely the Iberian Peninsula, southern France and Italy) were the highest since at least 2003, reaching approximately 37 teragrams of CO2.

To put this in context, the exceptionally wide-ranging wildfires over the Iberian Peninsula and the Mediterranean coast in 2003 accounted for the same level of anthropogenic emissions as all of western Europe for that year.

And if the wildfire intensity kills off significant forest cover in 2021, the resulting loss of carbon sinks could be even more devastating for the climate.

Wildfires on Turkey's southern coast have killed eight people and forced residents and tourists to flee. Italy and Greece are also seeing blazes amid high temperatures across the Mediterranean.