Emergency services evacuated several northern suburbs of the Greek capital after fresh fires broke out amid a heat wave. The city is engulfed in smoke. 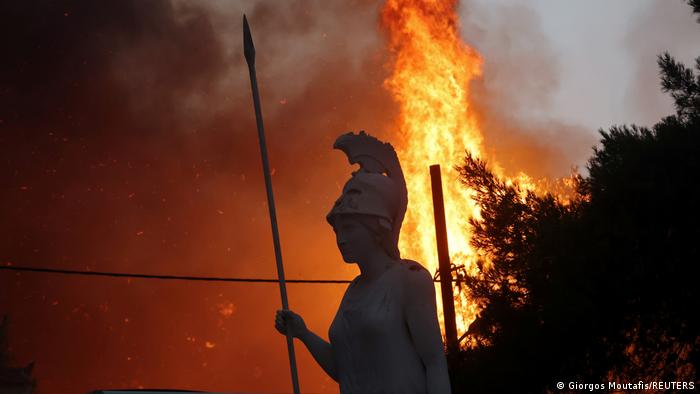 A major blaze threatened northern suburbs of the Greek capital

Greek firefighters said a large blaze outside the capital, Athens, had receded on Wednesday morning after thousands of people were forced to flee their homes the previous day.

The fire came as Greece experiences what has been called the worst heat wave in more than three decades.

The blaze, which firefighters battled all night, has damaged more than 90 homes, 27 businesses and burned more than 80 cars, Deputy Citizens' Protection Minister Nikos Hardalias said in a televised address. However, no serious injuries have been reported so far.

The city remained shrouded in smoke on Wednesday, with residents with breathing problems told to remain indoors. The Greek health authority reported levels of up to 465 micrograms of fine dust per cubic meter (35 cubic feet) in the city center.

The EU sets a limit of 50 micrograms per cubic meter of air. 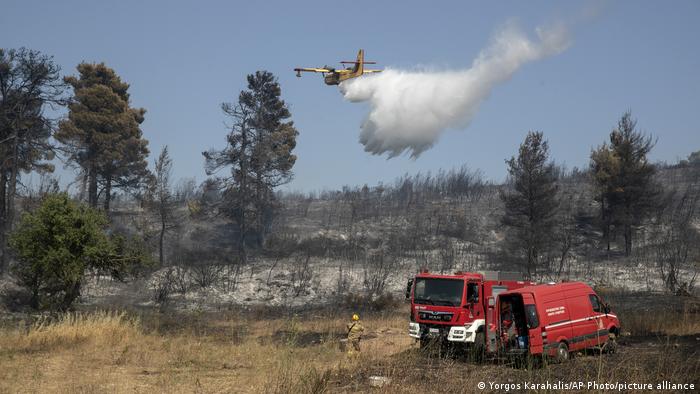 Water-dropping planes were used in fighting the fire near Athens

What happened at the height of the fire?

Emergency services faced a race against time to put the Athens fire out late on Tuesday as flames engulfed residential areas on the outskirts of the city.

They ordered thousands of residents north of Athens to evacuate, with fire crews going door-to-door to ensure the orders were being carried out.

Locals also received a warning by text message from the government as people from the affected neighborhoods left their homes in panic.

"Behind us is hell," one resident shouted from his car to reporters on the scene.

Hotel rooms will be offered for the coming nights to the people who had to flee due to the fire. 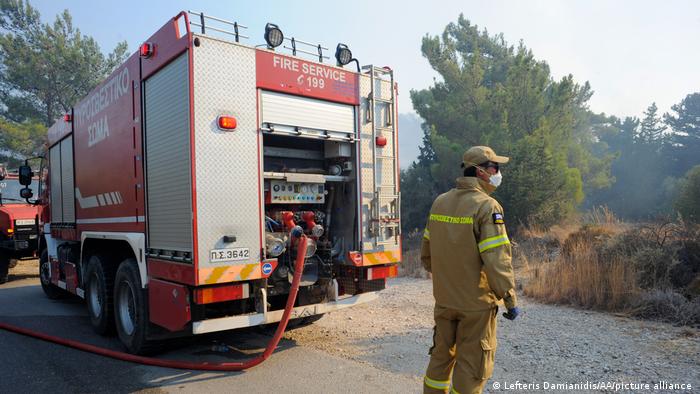 Greek firefighters have also been active on the island of Rhodes, where fires have been raging due to the high temperatures

The extreme temperatures have created conditions that are very conducive to fire, with hundreds of blazes burning across the country.

One major blaze is on Evia island, about 70 km (44 miles) from Athens, where authorities were forced to evacuate many villages since late Tuesday. At least 150 houses have been destroyed, firefighters and an official said.

The blaze has also surrounded a monastery on the island. Firefights said that three monks had refused to leave, with one telling the Greek ANA news agency by phone that they were suffocating because of the smoke.

Fires were also burning in the regions of Messinia and Mani in the Peloponnese.

The Greek Fire Service has maintained a nearly nationwide alert that started on Wednesday. The island of Rhodes close to Turkey is also facing similar fires.

Greece is not the only country in the region to have been hit by deadly wildfires this summer.

Italy, Turkey and Albania, as well as Northern Macedonia have also been affected by a series of blazes sparked by high temperatures.

From Germany to Canada to China, dramatic pictures of the severe impacts of extreme weather have been dominating the news in recent weeks.