As the southern European nation battles hundreds of wildfires, Prime Minister Mitsotakis has warned that the country is facing its worst heat wave in 30 years. Extreme weather in 1987 claimed more than 1,500 lives. Greece is battling hundreds of wildfires amid soaring temperatures

Greece is being hit by its worst heat wave in more than 30 years, Prime Minister Kyriakos Mitsotakis said on Monday as temperatures hit as high 45 degrees Celsius (113 degrees Fahrenheit) in some regions.

His comments came as firefighters across the country battled to get hundreds of wildifres under control.

"We are facing the worst heat wave since 1987... [causing] a burden on the electricity network," Mitsotakis told journalists. 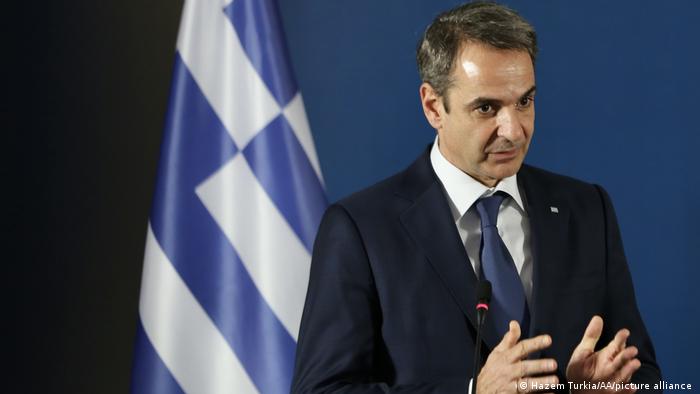 Which areas have been the worst affected?

At least four water-dropping planes were tackling a wildfire in the Tatoi area 20 kilometers (12.5 miles) north of Athens on Tuesday. It has engulfed the area in smoke, forcing residents to flee their homes and leading to the evacuation of a children's summer camp. .

"It is a large fire and it will take a lot of work to get this under control," Greater Athens regional governor George Patoulis told state-run ERT television.

"We are asking members of the public in the fire-affected areas to keep the windows of their homes closed because the smoke is very dense."

The National Observatory of Athens, citing EU satellite images, said some 3,000 hectares (7,400 acres) of pine and olive groves have been destroyed by a fire that broke out near the city of Patras, 200 kilometers (125 miles) west of Athens.

Emergency services had failed to extinush that fire on Monday, according to Greek state news agency ANA.

Extra firefighting crews were being sent to the island of Rhodes, which is close to the Turkish border, to try and get fires there under control.

A popular hiking spot known as "the Valley of the Butterflies" was evacuated on Sunday.

Further evacuations have been ordered along the coastal regions of the southern Peloponnese region,

How widespread are the fires?

Deputy Minister of Civil Protection Nikos Hardalias told Greece's Star TV that "we are no longer talking about climate change but about a climate threat."

"We are in a phase of absolute climatic deregulation," he warned. 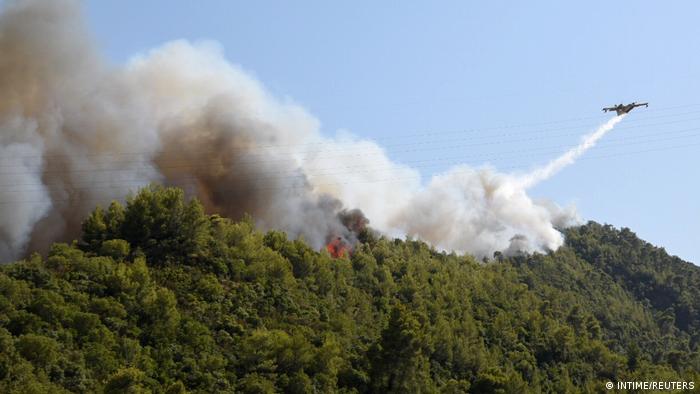 The hottest temperature ever recorded in Europe is 48 C, in 1977 in Athens.

Forecasters predict the temperature in Larissa, central Greece, will get close to that mark on Tuesday.

The soaring heat is putting pressure on the electricity grid as use of air conditioning increases dramatically.

Countries such as Italy, Spain and Turkey have also battled wildfires in recent weeks amid soaring temperatures. 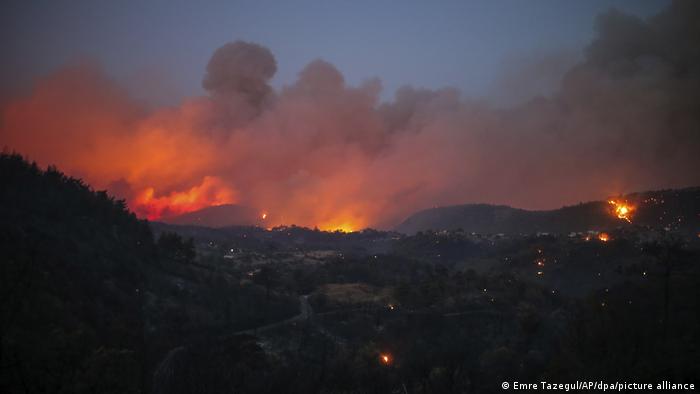 The fires have forced thousands of people to be evacuated from their homes.

The European Union on Monday said it would send volunteers and firefighting planes to Turkey where blazes have claimed at least eight lives.

What role does climate change play?

Last month, the AFP news agency obtained a leaked draft of the latest UN report on climate change, ahead of a November summit in the British city of Glasgow.

It warned that the world could be heading for a point of no return in a bid to stem the effects of global warming.

"Life on Earth can recover from a drastic climate shift by evolving into new species and creating new ecosystems," AFP quoted the report as saying. "Humans cannot."

Dann Mitchell, a professor of climate science at the University of Bristol, said the heat wave in southeast Europe "is not at all unexpected, and very likely enhanced due to human-induced climate change.''

"The number of extreme heat events around the world is increasing year on year, with the top 10 hottest years on record all occurring since 2005,'' he said.

"These black swan events have always happened, but now they sit on the background of a hotter climate, so are even more deadly.''