Strong winds are hampering firefighters' efforts. Alerts have been sent to residents warning them to "be ready to follow instructions." 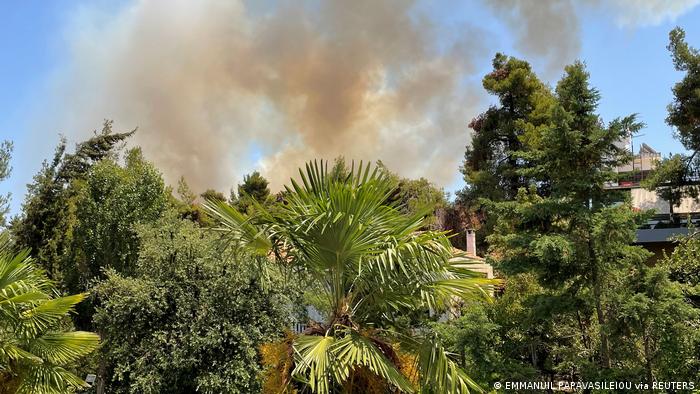 More than 50 bush and forest fires broke out in Greece on Tuesday.

Authorities reported a fire in a forest at the base of Mount Penteli north of Athens which was approaching the surrounding suburbs.

Around 70 firefighters, backed by five helicopters and five planes equipped for dropping water, were battling to contain the blaze. However, their efforts were complicated by the 38 kph (24 mph) winds.

Residents in the affected area were sent alerts to their phones, warning them to "be ready to follow instructions," but no evacuation orders had yet been issued.

They were urged to keep doors and windows closed to avoid exposure to smoke and prevent hazardous sparks from blowing inside homes.

The most dangerous fire raged in the Stamata-Dionysos region, about 20 kilometres (12.4 miles) northeast of Athens.

The deputy governor of the region, Vasilis Kokkalis, said houses were damaged and many residents had to be brought to safety.

The trouble with wind power in Greece

How frequent are forest fires in Greece?

The Greek Civil Defence warned on Tuesday of a high fire risk. Temperatures above 40 degrees Celsius (104 degrees Fahrenheit) were expected in all parts of the country in the coming days with strong winds expected.

Forest fires in Greece are common during the summer months, including around Mount Penteli.

In July 2018, 102 people died when a fire fed by winds off the mountain raced through the coastal town of Mati, near Athens, in the country's worst-ever toll from a forest inferno.