Greece: Many killed in forest fires near Athens

Major wildfires on either side of Athens are raging out of control, with at least 74 people reported dead. People evacuated to beaches and into the sea, where coast guard boats struggled to rescue them.

At least 74 people have been killed and 170 injured as the deadliest wildfires in Greece in more than a decade swept through seaside areas near Athens.

Two major forest fires started burning out of control on both sides of Athens on Monday, with Rafina to the city's east, and the other at Kineta, to the west, being the hardest hit areas.

Eye-witness accounts: Residents described how the ferocity of the rapidly spreading fires caught them off-guard and sent them running toward the sea.

"I saw the fire move down the hill at around 6:00 pm and five or ten minutes later it was in my garden," said 60-year old Athanasia Oktapodi, whose home is surrounded by pine trees. "They caught fire. I ran out like a crazy person, got to the beach and put my head in the water. Then the patrol boats came."

Another resident of the impacted area described that "everything happened in seconds."

"I grabbed a beach towel. It saved my life. I soaked it, grabbed my wife and we ran to the sea," said local resident Andreaas Passios. "It was unbelievable. Gas canisters were exploding, burning pine cones were flying everywhere."

Death toll expected to rise: Emergency officials said that the death toll is expected to rise as crews continue to check burned-out cars and gutted homes. "The problem is what is still hidden under the ashes," said Vice President of Emergency Services Miltiadis Mylonas.

Fires set intentionally? Authorities have not ruled out that fires were started by someone intentionally. Fifteen fires had started simultaneously in three areas around Athens on Monday. "I am really concerned by the parallel outbreak of these fires," Greek Prime Minister Alexis Tsipras said. 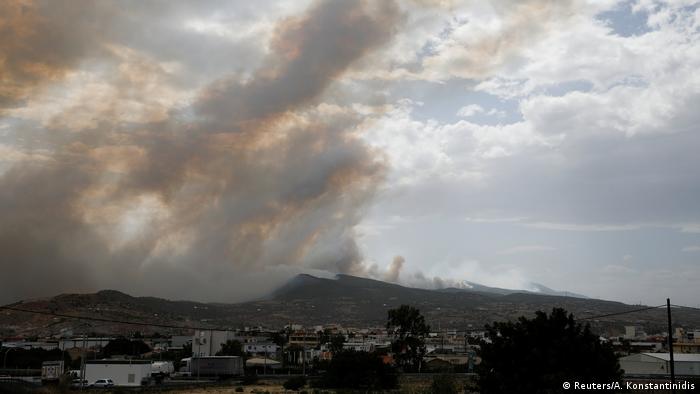 A wildfire burns in Kineta, near Athens

Why are there so many more fires? Science suggests that over the past several decades, forest fires have indeed increased. Large forest fires in the western US have been occurring nearly five times more frequently than in the 1970s and 80s.

Fires are a common problem in Greece during the heat of the summer when temperatures can reach 40 degrees Celsius (104 Farenheit), and can cause major loss of life. Wildfires that broke out on the southern island of Evia in 2007 claimed 77 lives.

According to the European Environment Agency, fire risk depends on many factors, including climatic conditions, vegetation, forest management practices and other socio-economic factors.

The agency found that the annual area burnt in the Mediterranean region increased from 1980 to 2000 but has decreased since. In a warmer climate, more severe fire weather and, as a consequence, an expansion of the fire-prone area and longer fire seasons are projected across Europe. The impact of fire events is particularly strong in southern Europe.

Europe burning: The fires in Greece come as northern European countries also struggle with forest fires exacerbated by drought and unusually high summer temperatures. Sweden, Finland, Norway and Latvia are also fighting multiple blazes. Sweden's civil protection agency MSB said on Monday there were 27 active fires across the country, and temperatures were expected to soar as high as 35 degrees Celsius (95 Fahrenheit) this week. Other EU countries have sent assistance to Sweden.

How cities and people can beat the heat

Heat waves are becoming more common and scientists predict that they'll only become hotter and longer-lasting in the future. So how can cities and their residents stay cool when the mercury rises? DW takes a look. (20.07.2018)