Extreme heat has made the job difficult for Latvian firefighters, as hundreds of hectares have been scorched in the west of the country. Meteorologists have said that unfavorable conditions will continue for two weeks. 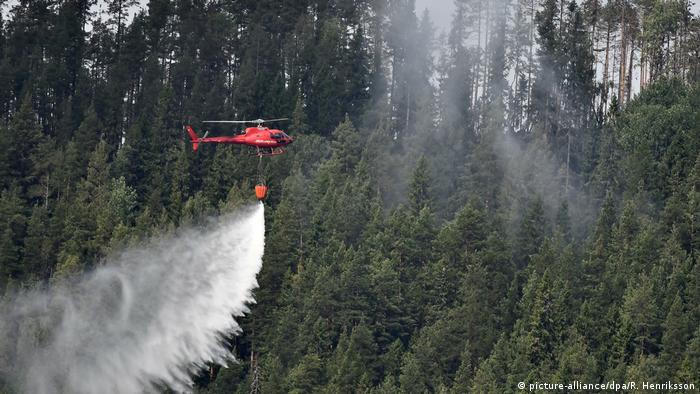 Five days of unabated fires have destroyed more than 800 hectares (2,000 acres) of land in western Latvia, authorities said Sunday. The Baltic nation is the latest to succumb to the heat and drought waves that have plagued northern Europe this summer.

Across the Baltic Sea, Sweden too has grappled with wildfires (main picture above) that have led to evacuations and prompted the Nordic country to seek EU help with its emergency response. Latvia has not yet requested assistance from its European neighbors and authorities say they do not plan to do so.

But sustained extreme temperatures have greatly hampered local firefighters' efforts. Latvian fire services spokeswoman Inta Palkavniece told reporters that a peat fire had begun last week in the western region of Courland, which has since spread east, and acknowledged that conditions to fight its advance are unfavorable.

The Courland region is sparsely populated, with few roads and many areas inaccessible because of its vast marshes. Additionally, meteorologists have warned that high temperatures are likely to persist and that no rain is expected for the next two weeks.

"Peatland fires burn downward, but when there's wind, which brings oxygen, the fires can erupt into flames," Palkavniece said. "The main goal is to prevent the fires from spreading," she added.

The forest fires add to Latvia's weather-related woes this year. The Baltic nation has experienced severe drought over the last few months, prompting authorities to declare a natural catastrophe in the agricultural sector.

More countries in Europe have been affected by an unusually long heat wave that seems likely to continue. The World Meteorological Organization (WMO) said on Friday that it was "extraordinary" that temperatures have been 10 degrees higher than average in Scandinavian countries this summer.

Nullis also noted that in Norway, on July 18, a record low temperature of 25 degrees Celsius was observed, "something that is more typical in Spain," she remarked.

The WMO warns that this extreme heat is helping lengthen a harsh spring drought that Latvia and other countries are experiencing.

In Poland, more than 91,000 farms were affected by the drought, according to the agriculture ministry, pushing the government to seek financial aid from the EU.

Agricultural producers in Germany have warned of a harvest reduction between 20 and 50 percent this year, as a result of the drought in May and June.