Greece in shock as deadly wildfires rage | Europe | News and current affairs from around the continent | DW | 24.07.2018

The death toll continues to mount after fires broke out with stunning speed, forcing beachgoers to flee into the sea. The country is observing three days of national mourning. Jannis Papadimitriou reports from Athens. 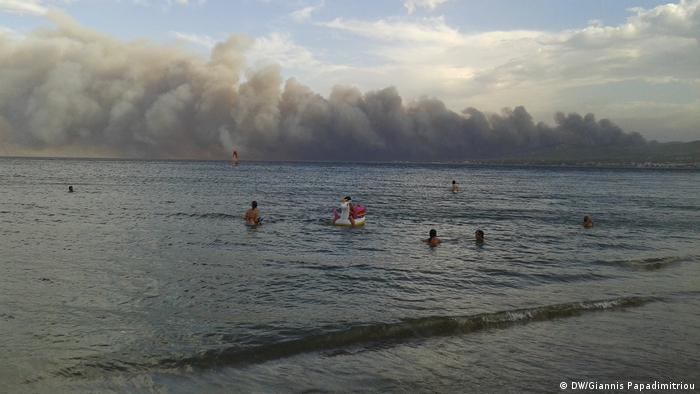 Flames and smoke over Rafina, as seen from the nearby beach of Marathon

In the holiday resort of Rafina, northeast of Athens, everything seemed to be fine until Monday afternoon. Large families were sunbathing on the beach, young couples enjoyed their coffee, farmers were working in the fields.

The fire broke out suddenly, spreading faster than ever before in the region due to strong winds, getting out of control. Thousands of people remained on the beach or were stuck on the way there, surrounded by fire. Not everyone managed to get into the water in time or to take the escape route to Athens. Firefighters were already battling another fire in the town of Kineta, west of Athens, at the time and couldn't immediately mobilize all forces for the Rafina region.

At least 50 people died, government spokesman Dimitris Tzannakopoulos said on Tuesday morning. Meanwhile, the media have reported at least 74 victims. And there are fears that the number of deaths will continue to rise dramatically. More than 150 people are suffering from severe burns or otherwise injured, including many children. The exact number of missing persons remains unclear.

"150 engineers from the relevant ministries will be in our city from Tuesday on to inspect all damaged houses. We have to fear that we will find more victims there, such as elderly people who have not managed to escape in time," Myron Tsakirakis, an employee of the city of Rafina said. There were also agricultural workers from Asia working in the region, who were presumably not registered by the authorities.

A young man explained on TV station Alpha that he could not believe his luck amid others' misfortune: "The flames almost caught me near the harbor. I didn't know what to do so I just jumped in the water. Fortunately, a lifeboat came along at some point..."

Three days of mourning in Greece

"An Apocalypse" is the headline in Ta Nea, Athens' highest-circulation newspaper. By order of Prime Minister Alexis Tsipras, Greece will observe three days of mourning beginning on Tuesday.

"We will forget nothing and nobody; the time of comprehensive analysis will come, but in these hours there are no (political) arguments," Tsipras said in a TV speech on Tuesday afternoon. "It's about mobilizing and fighting."

What he means is: For the time being, no one should complain about shortcomings or incompetent officials. This would only make the already hard work of firefighters and rescuers even more difficult. Most Greeks adhere to this — if only because they cannot yet grasp the full extent of the disaster and criticism at this point would be seen as a lack of respect for the victims.

Even conservative opposition leader Kyriakos Mitsotakis, currently the strongest opponent of left-wing Prime Minister Tsipras, said on Tuesday during a visit to the Rafina region that this was a time for solidarity and unity.

But a few voices of criticism can be heard. "Of course we do not expect miracles, but we do expect the right preparation and the right plan, even when worse comes to worst. And there is no such plan, as the high number of dead proves," Athenian news portal In.Gr wrote.

Wherever the state cannot help, Greeks have to be proactive. Many people in the Rafina region are offering their help via Facebook. They want to support fellow citizens who have lost their belongings in the fire and are looking for a temporary home. Others want to help injured pets.

Local authorities and NGOs are calling for donations or voluntary work. Foreign politicians have also contacted Prime Minister Tsipras and are offering help — among them Turkish President Recep Tayyip Erdogan.

Despite all the criticism of the authorities, some Greeks have to look in the mirror first: some drivers on their way out of Kineta on Monday used the emergency lane on the highway to Athens, thus considerably hindering the firefighters trying to get through.

"That's a crime — you can't do that," Iaveris, a highly respected race driver in Greece, said on TV station Skai. "Maybe the firemen are on their way to your own house right now and you're still obstructing them."

According to media reports, the police had to intervene again and again to keep the emergency lane clear. It is not known if any such drivers have been fined or otherwise prosecuted.

The world is losing vital forests quicker than ever