Amitav Ghosh on the fundamental conflict of climate change

The climate crisis never seems far from the mind of award-winning Indian writer Amitav Ghosh. From his home in New York, he spoke to DW about his latest book.

Arts and Culture with Karin Helmstaedt on Tuesday, 21 September 2021

Amitav Ghosh is one of the few major authors to use literature to examine the global climate crisis. The award-winning Indian writer's books include The Glass Palace and Sea of Poppies.

His latest work, the illustrated book Jungle Nama, is about human greed, the forces of nature and the importance of balancing the two.

Amitav Ghosh spoke to DW from his home in New York, where he's been living for many years.

DW: You've been writing passionately about climate change for years in novels, and also the essay, The Great Derangement. Last week saw deadly floods in Asia and Europe, wildfires and heat waves in North America — what's been going through your mind?

Amitav Ghosh: First of all, I think of myself as writing about the reality of today rather than about climate change exclusively, because I think climate change is not just one thing — it's "everything change," as Margaret Atwood famously put it. These floods, and the other climatic events around the world, really show us that we are in the time of "everything change."

You live in the United States, you're originally from India and your books take place in South Asia, in regions that are affected by floods and have been for some time. But you write about the disparities between rich Western countries and developing countries in the east. Do you think that the events of the last weeks are a signal that we're really all in this climate crisis together?

Yes, absolutely. It was interesting to see one of the interviews that were conducted in one of the German flooded areas, a woman saying, "we don't expect this to happen in Germany."

That's really been the attitude for a long time, that these things happen somewhere else. And as we can see now, that's not the case. These things are happening everywhere. In fact, within Europe, there are countries that are among the worst affected. Italy is one of them.

I want to talk about your latest work, called Jungle Nama, a collaboration with the artist Salman Toor. It's a very old story from the Bengal region in India and Bangladesh about a forest deity called Bon Bibi and a greedy merchant who's looking for honey, which you've retold in verse. What makes this story so relevant for us today?

The story really conceptualizes the fundamental conflict of climate change, which is between the human search for profit and the needs of all other beings. And that's a remarkable thing, that's what interests me. 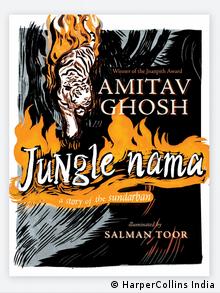 Can you tell us a little bit about what it's about?

It's about a merchant who's already rich, but he goes into the forest to basically despoil the forest and seize anything he can. And while he's there, he falls into the clutches of a tiger demon and he makes, as it were, a pact with this demon, a pact to leave behind a member of his group. And then, the deity, Bon Bibi, intervenes and saves the child.

You have in the past lamented the portrayals of climate change and climate crises. Are these exaggerated science fiction tales or more niche stories? How is it that you would like to see climate change portrayed by artists and authors?

I don't know. I don't imagine that I'm laying down the law for a writer. That's not at all the case. I think every writer will write about these things in their own way. I think it's impossible to imagine that we ask writers to create, as it were, climate propaganda. I don't think that that would work at all. So that's not my idea.

The one thing that interests me, that presents itself as a challenge to me as a writer, is to write about our times as they really are. And we can see that our times are now completely changed from, let's say, even 30 years ago. This is what we should reflect in our work, what I should reflect in my work.

Do you have hope that authors like yourself can help in the fight against climate change?

Realistically speaking, as authors we have very little influence in the world, so it's not with that intention that I write. I write because I've always written about the real world and the world that we live in — and I don't feel that we should exclude this from our narratives.