EU sends help to Turkey as wildfires rage on

The bloc will send three air tankers as President Erdogan and his government face criticism for being out of touch and unprepared. Eight people have been killed over the past six days and thousands evacuated. 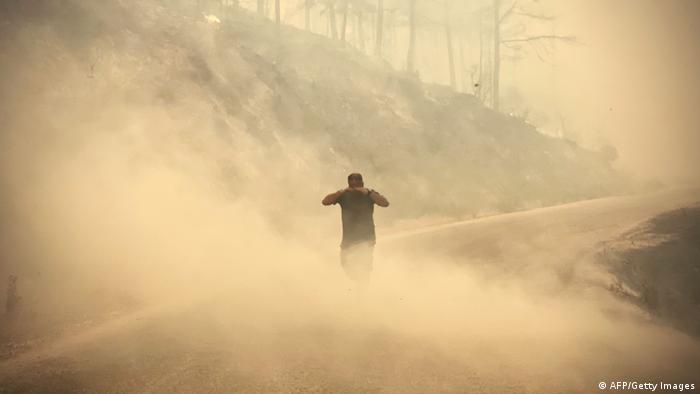 The European Union announced on Monday that it would send three air tankers to Turkey to combat forest fires that have been burning near the Mediterranean coast in Antalya since last Wednesday, saying it "stands in full solidarity with Turkey at this very difficult time."

The EU aircraft  — one from Croatia and two from Spain — will operate alongside teams from Russia, Iran, Ukraine and Azerbaijan in assisting locals and Turkey's regional and national efforts.

How is Turkey's Erdogan handling the crisis?

The aid comes as Turkey's strongman President Recep Tayyip Erdogan and his government face criticism for their handling of the situation. Ankara initially sought to pin blame for the fires on Kurdish arsonists but was forced to drop that stance as the number of fires and deaths began to climb.

The affected region has been plagued by extreme drought for months and as fires continued to rage, the government's sluggish response was quickly compounded by an admission that it did not have enough aircraft to sufficiently battle back what are the country's deadliest wildfires in decades.

Moreover, President Erdogan was lampooned on social media as being entirely out of touch when he tossed bags full of tea to locals in one of the worst-hit regions in the country. The publicity stunt came as Erdogan, surrounded by a heavy police escort, delivered political speeches in and around Marmaris.

Currently, government planes and helicopters are at work as locals trek buckets of water up hillsides in doing their part.

Forestry Minister Bekir Pakdemirli says more than 130 fires have been recorded in dozens of towns and cities across Turkey since Wednesday. Seven of them — mainly near the southern resort towns of Antalya and Marmaris — are still burning.

Turkey: Cause of Antalya fires still under investigation

Fires in Turkey have been fueled by high winds and low humidity, driving temperatures above 40 degrees Celsius (104 degrees Fahrenheit) across the region. They come as southern Europe finds itself in the grips of a prolonged heatwave with more large fires raging in Italy, Spain and Greece.

Across the Strait of Marmaris, neighboring Greece is battling more than 100 fires. "We are no longer talking about climate change but about a climate threat," said Greek Deputy Civil Protection Minister Nikos Hardalias, who drew a clear line between rising temperatures and the ferocity of fires across the continent.