At least three people have been killed and more than 100 injured as fires sweep across Antalya. Authorities say firefighters have contained several fires yet high winds make the path of those still burning unpredictable. 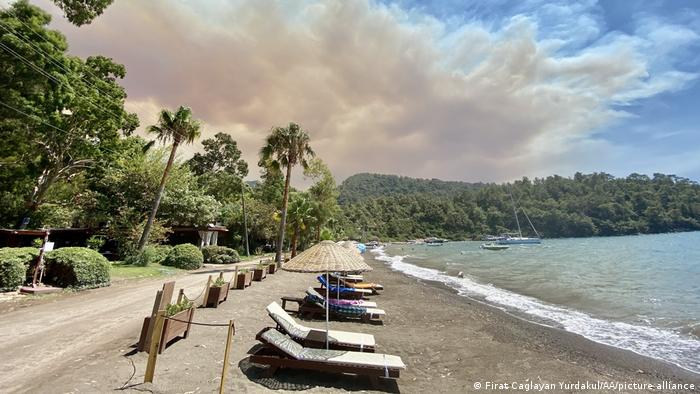 At least three people have been killed and more than 100 injured as a result of large forest fires in southern Turkey according to state news agency Anadolu.

Turkish Minister of Agriculture and Forestry Bekir Pakdemirli said 41 fires had broken out across 13 provinces on Wednesday and Thursday.

Though Pakdemirli said most fires have since been extinguished, he noted that others still burned near the Mediterranean resort towns of Mersin and Alanya.

The minister also posted a video on Twitter of firefighters attempting to contain a fire near the popular seaside town of Marmaris, where TRT state television reported some hotels had been evacuated.

"In #Marmaris, the heroes of the forest are fighting fires with great devotion from the air and land for the #YeşilVatan [green homeland]," read the tweet.

The Turkish Disaster and Emergency Management Presidency (AFAD) said that in addition to the three dead, more than 112 people had been affected by the fires — including 58 who had to be hospitalized, mainly for smoke inhalation.

Forestry Minister Pakdemirli voiced confidence while addressing reporters in the city of Manavgat but also caution: "At the moment, there is no immediate threat to any settlement or to life, but in the hours to come, if the wind changes direction, we will need to take additional precautions.''

Officials say none of Antalya's seaside resorts — highly popular vacation destinations for Russian and European tourists — have been directly affected by the fires.

Like other southern regions, summer wildfires are a common occurrence in Turkey. Though many begin by natural causes, others have been blamed on arson.

Turkey's tourism season may get off to a tough start