Turkish President Recep Tayyip Erdogan has been criticized for not doing enough to put out the flames. Italy, Greece and Bulgaria are all fighting their own blazes. 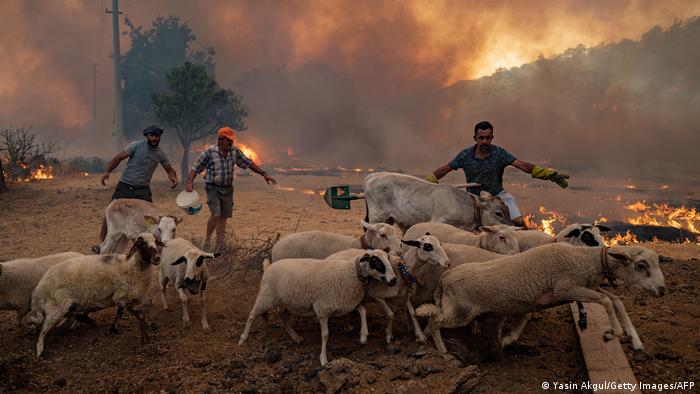 Out-of-control wildfires in Turkey threatened to engulf a thermal power plant in the southwest of the country Tuesday after killing eight people and injuring many more.

Fanned by strong southern winds, the blazes have razed whole forests to the ground, scorched fields in their path and destroyed homes, forcing thousands to flee for their lives over the last week.

Turkish President Recep Tayyip Erdogan has come under increasing criticism for his inability to contain the flames as temperatures soared past 40 degrees Celsius (104 degrees Fahrenheit) across the country.

How widespread are the wildfires?

The mayor of the southwestern city Milas, Muhammet Tokat, raised the alarm about coastal fires endangering the Kermekoy power plant.

In one of a series of panic-stricken Twitter posts, he said: "The situation is very serious. The flames have come to the edge of the thermal power plant."

He tweeted a video showing the proximity of the fires to the power station in the middle of the night.

Mayors in nearby resort cities Bodrum and Antalya have pleaded for planes to fight blazes with experts citing climate change as the main culprit.

Although 137 fires in 30 provinces have already been extinguished, at least 11 blazes are still raging, causing panic and confusion at a level rarely seen in Turkey.

A senior Turkish forestry official said the fires were the worst he could recall, destroying countless acres of forest. The official, who spoke on condition of anonymity, said he did not know when they would be put out.

Farmers drove their animals to the beach and tourists scampered onto boats to escape the wildfires in coastal areas.

In cities like Istanbul, there were frequent blackouts as air conditioners were on full blast and waters in dams dried out, leading to a drop in electricity generation.

Health Minister Fahrettin Koca reported that 36 people in Mugla and 11 others in the tourism mecca of Antalya were being treated for fire-related injuries.

Why are people angry with Turkey's government?

Social media has been alight with criticism for controversial Turkish leader Erdogan, whose media crackdown after a failed coup in 2016 had already ignited anger in the population.

Opposition members in parliament voiced their frustration at the government not having an adequate fleet of firefighting planes, with the ones they have not being in a usable condition.

Extinguishing planes from Spain and Croatia are now set to join others from Russia, Iran, Ukraine and Azerbaijan that are already working in the region.

In total, 16 planes, 51 helicopters and over 5,000 people are trying to put out the flames, with the Turkish authorities saying they would mobilize troops to help out.

Erdoganꞌs government has also come under fire for not accepting foreign help.

Greece and Israel offered firefighting planes but the Turkish leader turned them down, claiming their water tonnage was not enough for the job.

Instead, Fahrettin Altun, a top Erdogan aide, said: "Our Turkey is strong. Our state is standing strong."

In Greece, firefighters are struggling to contain a large wildfire menacing the northern Athenian area of Archanes. Its spread has forced authorities to order evacuations and close a major motorway.

"Leave your homes immediately," the mayor of Archarnes, Spyros Vrettos, told thousands of Varybobi and Acharnes residents on state television.

Clouds of smoke billowed over the Tatoi neighborhoods and overshadowed Athens. "Behind us is hell!" shouted a resident as he along with many other fled their homes in panic.

Over 300 firefighters equipped with 35 firetrucks and 10 aircraft have been unable to contain the spread of the blaze. 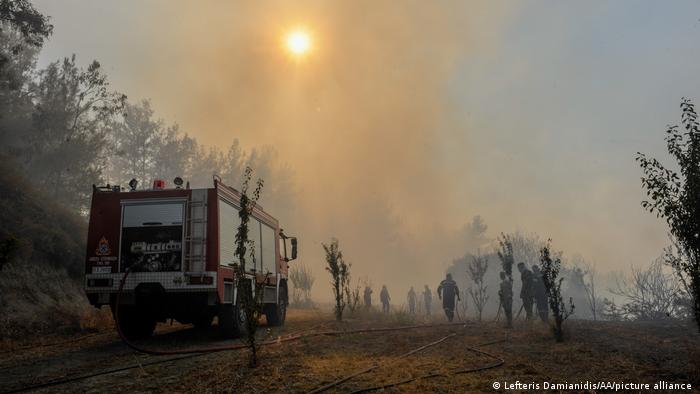 Authorities ordered the evacuation of three villages in the southwestern Peloponnese region 300 kilometers from the capital as fires spread there too.

Emergency services were also tackling fires on the islands of Kos and  Rhodes, making life tough for the pandemic-hit tourism industry.

What other places are battling fires?

The heat wave across southern Europe has already scorched its way through Sardinia and is now raging through the Italian regions of Calabria, Sicily, Basilicata and Puglia.

The head of the Italian civil protection agency, Fabrizio Curcio, called the fires in central and southern Italy "dramatic" as firefighters attended to over 1,100 incidences since Monday.

Bulgaria also reported wildfires that burned down a remote village called Dolno Selo in the southwest of the country.

The fire destroyed around 100 hectares of forest in Pernik, although no injuries have been reported across Bulgaria.

The current heat wave is expected to last until Friday, but hot temperatures are expected throughout August.