From a workers' association to a political party

The Social Democrats (SPD), Germany's oldest party, claim to be the world's oldest democratic party, as well. The SPD was born in an era when workers began to rebel against the businesses that employed them.

On May 23, 1863, Ferdinand Lassalle, the well-to-do son of a merchant was the driving force behind the foundation of the General German Workers' Association (ADAV) in Leipzig, the precursor of what in the 19th century became known as the Social Democratic Party of Germany. At that time, more than half of the citizens in the country were illiterate. Free elections and anonymous ballots had yet to come. 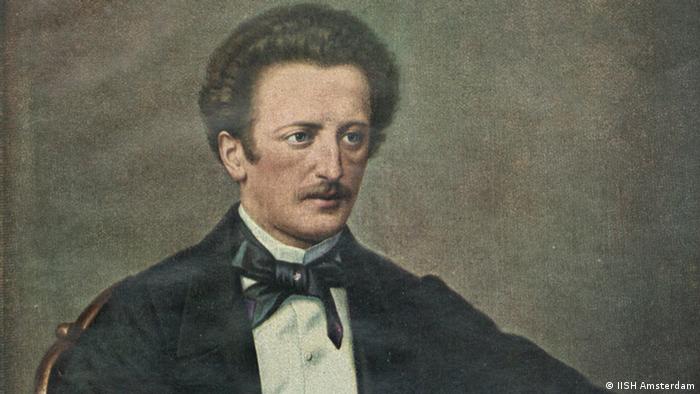 Ferdinand Lassalle turned his frustrations into a political party

During the reign of the German empire from 1871 to 1918, the party quickly became a mass movement, with upwards of 1 million members. In elections, it obtained one-third of the popular vote.

The SPD became so popular that the chancellor of the newly unified German empire, Otto von Bismarck, banned the party through a series of "Anti-Socialist Laws." For 12 years, union-friendly proponents of social democracy were monitored, denounced and forced to emigrate.

Persecution led to radicalization within certain elements of the party. Larger numbers of Social Democrats began adopting the tenets of revolutionary Marxism, which foresaw the collapse of ruling capitalist structures and their replacement in a propertyless and politically classless society.

By the end of World War I in November 1918, that philosophical crack had led inexorably toward a political schism, splitting the movement into reformist and revolutionary factions.

When Germany's last imperial chancellor, Kaiser Wilhelm II, abdicated the throne on November 9, 1918, both branches of the social democratic movement called simultaneously for the founding of a new republic. From the chambers of Berlin's Reichstag parliament, the Social Democrat Philipp Scheidemann proclaimed a moderately democratic republic, while Karl Liebknecht called for a "socialist-communist" Germany.

But the Weimar Republic, founded and supported by a majority of moderate Social Democrats and representing the first phase of democracy on German soil, was politically unstable during its short life from 1918 to 1933. Because of hyperinflation and mass unemployment, the country's economic condition appeared hopeless. Weak democratic institutions could no longer counteract the rise of National Socialists under Adolf Hitler.

Still, all 94 SPD parliamentarians voted against Hitler's "Enabling Act of 1933,"  a law that replaced democracy in Germany in favor of Hitler's despotism. 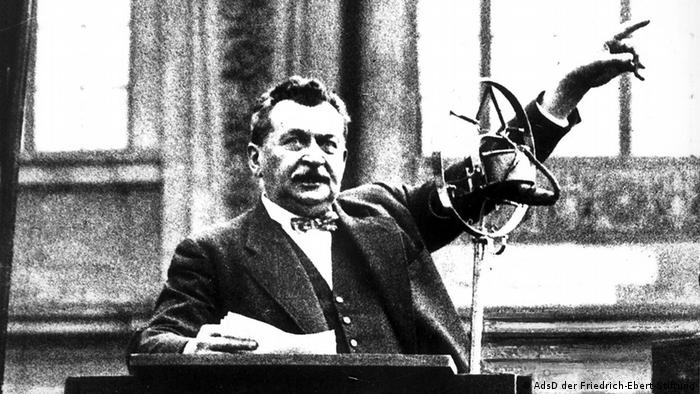 At the end of World War II in 1945, what remained of the SPD had become a leftist popular front whose chief preoccupation was with itself in the postwar years. As Germany's conservative political party set the country on a path that would lead toward the "economic miracle," the SPD corrected and revamped its anti-capitalistic attitudes.

In the Godesberg Program of 1959, the party embraced the market economy — albeit one girded with strong social security mechanisms.

In 1966, with the beginning of the grand coalition between the SPD and its traditional center-right rival, the Christian Democratic Union (CDU), a decade of postwar development shaped by the SPD began. Where SPD politicians of various generations had previously anchored their policies on women's suffrage, eight-hour workdays, and support for trade unions, in 1969, German Chancellor and SPD chairman Willy Brandt set his attention to peace and reconciliation with the socialist states of Eastern Europe.

Brandt received the Nobel Peace Prize in 1971 for dropping to his knees at the Monument to the Ghetto Heroes in Warsaw, an act that, performed by a sitting German chancellor, became the symbolic apology to the Polish nation for the crimes of the Nazi dictatorship. 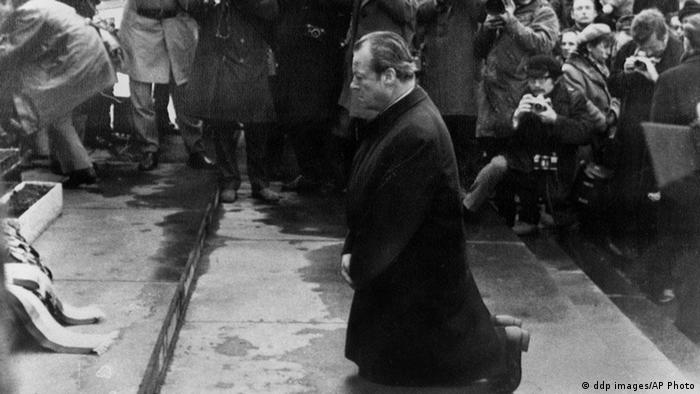 In kneeling, Brandt became a symbol of German remorse and the most recognizable SPD politician worldwide

"It was the instinct of a moment that moved him toward a gesture, through which a person who bore no personal guilt asked forgiveness for the guilt of his people," recalled Egon Bahr, the architect of Brandt's policies in Eastern Europe.

The era of Willy Brandt and his successor, Helmut Schmidt, is seen as the golden age of the SPD in Germany.

In the years before and after the peaceful unification of East and West Germany through the fall of the Berlin Wall in 1989, the SPD found itself taking a back seat. Helmut Kohl of the CDU was considered the "chancellor of unification," a reputation that carried politicians of his center-right party to government seats for many years to come.

In 1998 Germans opted for an end of the Kohl era, and the SPD's charismatic Gerhard Schröder formed a coalition with Joschka Fischer and his Green Party. 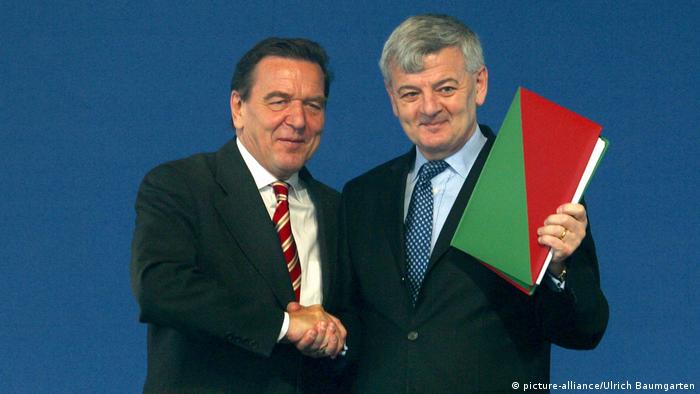 With high unemployment and an economic recession, Schröder's SPD adopted a conservative course and business-friendly policies that put off the party's traditional base of workers and trade unions.

This concept, called "Agenda 2010," introduced the welfare cuts known as Hartz IV, which toughened requirements for the unemployed and curbed benefits and state aid. This move split the party: SPD conservatives lauded the policy's beneficial effect on job growth, while more left-leaning factions condemned Hartz IV as inhumane and neoliberal.

The party's traditional voters — industrial workers and low-income earners — turned their backs on the SPD, a fact that, by the end of Gerhard Schröder's chancellorship in 2005, led to an identity crisis within the party. The party plummeted to well below 30% on the national level and in most of the federal states, leading to over a decade of electoral setbacks and rubbing shoulders with conservatives.

Years of a "grand coalition" with the center-right CDU of Angela Merkel took their toll, as the SPD was viewed as capitulating to Merkel's conservatives.

The party hit rock bottom after the resignation of SPD party head Andrea Nahles in 2019 following the SPD's record poor showing in European Parliament elections, of only 15%.

Revival of the SPD?

Being in power is exactly what Vice Chancellor Olaf Scholzmanaged to capitalize on in the 2021 election race. The pragmatist from the center right of his party campaigned on stability and continuity. He had served as Merkel's labor minister and later as her vice chancellor and finance minister in 2018.

As secretary-general of the SPD, he had backed Schröder's Agenda 2010, drawing the ire of his party's left wing, who regarded him as betraying the party’s principles.

A pragmatist – Olaf Scholz of the Social Democrats

It came as a surprise that he was nominated early as SPD chancellor candidate, just months after his defeat in the party’s leadership contest in 2019 — when members preferred two left-wing politicians Saskia Esken and Norbert Walter-Borjans.

CDU and Christian Social Union conservatives accused Scholz of planning to form a far-left government. But Scholz kept his distance from the Left Party. That socialist grouping is rooted in the Communist Party that ruled over East Germany but also includes high-profile SPD renegades, who had left the SPD in 2004 in protest over the increasingly neoliberal Schröder policies. The SPD's left-wing is likely to advocate for a rapprochement.

Going forward SPD leaders may find themselves struggling to prevent another eruption of fierce infighting.

This article has been translated from German and was first published in 2018. It has since been updated.