The German press has been pondering the fate of Andrea Nahles after her decision to quit as Social Democrat leader. Newspapers speculated on the future of the ruling coalition and the possibility of a general election. 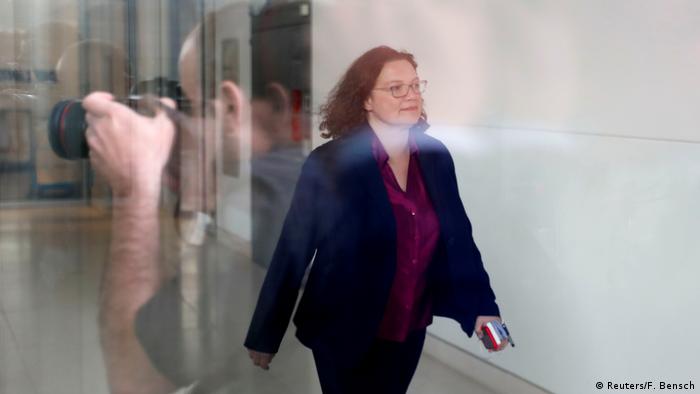 Politics is unfair, German newspaper Die Welt noted. "Sometimes, so unfair that it's hardly possible to bear," the paper's commentary ran. "You don't need to be a friend of Andrea Nahles — her conservative image of society and her functional style — to appreciate the injustice of her resignation."

Nahles had worked to restore the SPD's social welfare credentials that were so badly damaged by the reforms of former German Chancellor Gerhard Schröder, the newspaper said. As SPD leader, Nahles steered Angela Merkel's coalition partner to the left, successfully pushing through its agenda of improving social welfare and working conditions.

"In this way, she's not only shaped the social policy but also the economic policy of the grand coalition, ultimately more than Merkel," Die Welt noted.

However, those efforts hadn't translated into better polling, with the SPD's vote share sinking to a historic low of 15.8% in May's European elections. The SPD's traditional voters hadn't thanked the party, the newspaper said.

While Nahles had the wherewithal to be an effective leader, this would be the case "only in an opposition role," the Koblenz-based Rhein-Zeitung newspaper said. "For this, she would be almost perfect with her boisterous and, at times, unbridled temperament."

The newspaper speculated that Nahles' "shrill tones" and "clowning around" could have been forgiven if the SPD were in opposition, but the coalition role required a diplomatic tact that was lacking. "The party and group leader managed, again and again, to smash the porcelain to pieces," it said.

Freed from the burden

The Nürnberger Nachrichten newspaper observed that Nahles — like her predecessors — would now be free to watch events unfold from a safe distance. "She no longer has to bear the burden of responsibility for a party's decline the likes of which have hardly been seen before." Alluding to her possible successors, the paper predicted they would have a grace period of about six months before the same difficulties began again.

The Neue Osnabrücker Zeitung said "only someone who wins by a direct vote would have the necessary authority" to succeed Nahles successfully. "Whoever has the courage to stand after the party's brutal treatment of Andrea Nahles would deserve respect for that alone." 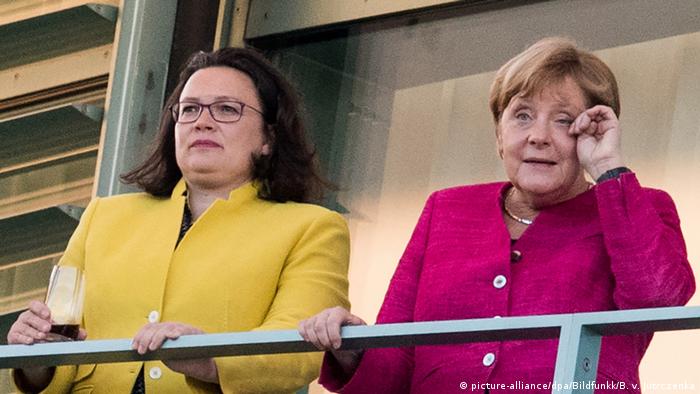 It's been a rocky time for the coalition of late, and Nahles' resignation threatens to make things worse

"The SPD should not rush the question of whether the party should remain part of the (ruling SPD/CDU/CSU) coalition," the paper opined. It noted that the party could point to achievements during its time in the latest iteration of the "grand coalition" and questioned whether it could get its message across any better by sitting in opposition.

A risky patch for coalition

For the newsmagazine Focus, the country as a whole could suffer from Nahles' decision to step down. The magazine warned of the approach of a "dangerous period of insecurity" for the coalition.

"Andrea Nahles has stepped down and the situation is now highly dangerous, both for the coalition and for the country. It's not as easy to deal with as some might think. The process of dissolution is increasingly out of control. Stability is not an end in itself but, without stability, little can change in this country."

The Stuttgarter Zeitung mused about the possibility of an early general election, and ventured that this might not be a good thing for the SPD. "Miserable polling shows what the Social Democrats would have to expect from fresh elections." While a snap election could lead to the formation of a left-wing coalition, the SPD would merely act as "stirrup holders" to a senior coalition partner in the shape of the Greens.

"In the best of cases, it would only be a fatal minor role in the next change," the paper said.