Kevin Kühnert, the head of the SPD youth movement, has kicked up a backlash in Germany for his socialist remarks. But not all thought his calls for collective control and property-ownership restrictions were out of line. 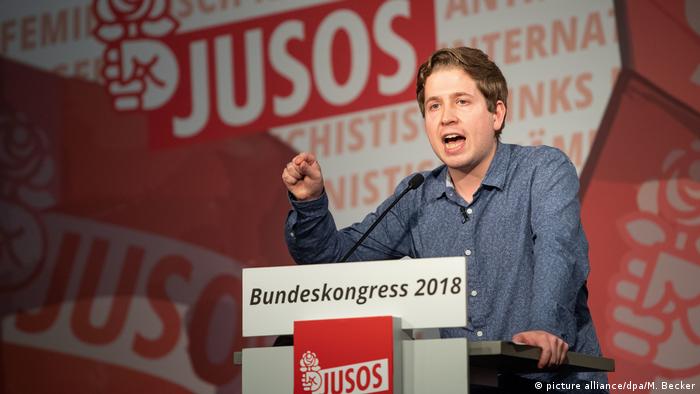 The leadership of Germany's center-left government party, the Social Democratic Party (SPD), has distanced itself from the leader of its own youth movement, Kevin Kühnert, after he called for major German companies like BMW to be collectivized.

Instead, Kühnert, who heads the "Jusos," or Young Socialists, said that what was important was that the distribution of BMW's profits should be democratically controlled, which meant there could be no "capitalist owner" of the company.

Kühnert also called for an end to property ownership as a business model: "Thinking it through logically, everyone should own no more living space than they themselves live in."

The comments attracted a storm from other major figures in the SPD, junior partner in Angela Merkel's government, with General Secretary Lars Klingbeil tweeting that Kühnert was describing a "social utopia."

"This is not mine and not a demand of the SPD. Nevertheless I call for more calm in the discussion."

Read more: Germany's political parties: What you need to know

'What was he smoking?'

That last remark may have been prompted after an intervention from the more economically liberal wing of the SPD, in the shape of Bundestag member Johannes Kahrs, who tweeted: "What terrible nonsense. What was he smoking? It can't have been legal," along with a link to a news story about the interview.

Also on Twitter, Kahrs accused Kühnert of "scaring off voters in the middle of an election campaign."

Figures from Merkel's conservative allies, the Christian Social Union (CSU), warned that Kühnert should join Germany's socialist Left party and that "no government could work" with people like him.

The intervention reignited a more fundamental debate inside the SPD about what place socialism still has in the party.

The party's older, more radical socialist principles were transformed after the war in the so-called "Godesberg Program," which ditched the goal of toppling capitalism in favor of reforming capitalism. It served as the party's de facto political road map from 1959 to 1989. The Godesberg Program also largely dropped the SPD's self-definition as a working class party, in what for decades was a successful attempt to define itself as a broad-based "people's party."

But the SPD's program still, at least on paper, adheres to the principle of "democratic socialism."

As far as some in the party were concerned, Kühnert's statements had not gone beyond the party's basic principles. Bundestag member Hilde Mattheis, who chairs an association of left-wing SPD members, did not understand what all the fuss was about and defended the Kühnert's statements about BMW. 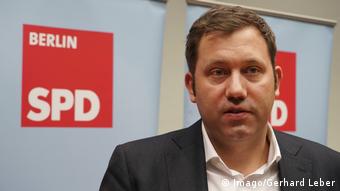 "That's certainly something that should be discussed," she told DW. "At the moment we have an auto industry that has established itself to the extent that its mistakes are at the expense of consumers. I think it's completely right that we ask how to get more democracy into the economy."

The term "democratic socialism" is in fact a complex one for the SPD. Bernd Faulenbach, a historian who for many years led the SPD's historical commission, told DW that, "for some [the term] is a statement of political direction. For others it is just a historical term. But it's not a term that … is taboo." Nevertheless, he added that SPD members had become more reserved about using it in the 1990s, when the party set up branches in the former East Germany.

A more controversial term that Kühnert used is Enteignung, or expropriation, used to mean the forced purchase of property by the state. Such purchases are allowed in the German Basic Law, though only to serve "the public good."

Kühnert brought the idea up as a possible way for the state to intervene in Germany's affordable housing crisis. But Ralf Stegner, the SPD's deputy leader was skeptical: "That won't solve the housing crises, because it takes a while and costs money in compensation."

Stegner pointed out that Kühnert had simply been answering a question about the meaning of socialism in a democratic context. In his opinion, the whole debate has been overblown. It's a "storm in a teacup," he said.

Angela Merkel says she wants to remain in office until her term is up. But behind the scenes, plans are already being hatched for Annegret Kramp-Karrenbauer to take over the chancellorship. (23.04.2019)

German Justice Minister Katarina Barley, a German-British dual citizen, says the entire Brexit process has been painful. With a resolution looking distant at present, Barley believes a referendum might offer a solution. (02.04.2019)

As the song says, you can dance if you want to. But not on Good Friday in Germany, which retains intense restrictions on Easter revelry. It's an annual debate — led this year by two generations of Social Democrats. (19.04.2019)