How long will Angela Merkel′s chancellorship last? | Germany | News and in-depth reporting from Berlin and beyond | DW | 22.04.2019

Angela Merkel says she wants to remain in office until her term is up. But behind the scenes, plans are already being hatched for Annegret Kramp-Karrenbauer to take over the chancellorship. 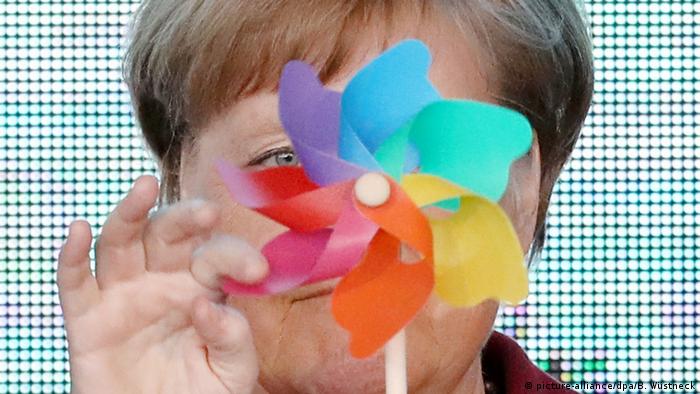 After 14 years in power, Angela Merkel is slowly but surely on her way out. She has already stood down as the leader of the Christian Democratic Union (CDU). Annegret Kramp-Karrenbauer has taken over as head of the conservative party, and it is an open secret that Merkel would love to see her become the next German chancellor, too. But how and when could this happen? Media reports in the country have speculated that Merkel's departure may be imminent. Indeed, she has almost entirely abstained from campaigning for the CDU ahead of the European Parliament elections.

Merkel, a scientist by training, appears to have made a rational decision to not interfere Kramp-Karrenbauer's political affairs. She wants to give her space to lay out her own agenda and gain a following.

Kramp-Karrenbauer, popularly known in Germany as AKK, has her own set of policy goals and is keen to reorient the CDU. While she does not appear to have radical changes in mind, she holds more conservative positions than Merkel on matters such as immigration, gay marriage and integration within the European Union.

Her rise has been welcomed by more conservative factions within the CDU, including from Friedrich Merz, who launched an unsuccessful, albeit close, bid to lead the party last fall. Once rivals, Kramp-Karrenbauer and Merz are now working side by side. And they seems to be on good terms.

Kramp-Karrenbauer has been campaigning for the European Parliament elections with Merz, who has been forthright about the fact that he would like to become a minister in a potential Kramp-Karrenbauer government.

Officially, Merkel wants to remain in power until her tenure is up in 2021. But behind the scenes, all kinds of scenarios are being considered to help Kramp-Karrenbauer take the chancellery. Traditionally in Germany, sitting chancellors remain in power until their term is up, and parliament — the Bundestag — decides who takes the post next.

The country's current grand coalition government — made up of the CDU, their Bavarian sister party, the CSU, and the center-left Social Democrats (SPD) — still commands a parliamentary majority. Yet the SPD has already announced it won't back Kramp-Karrenbauer as Merkel's successor. They want to prevent Merkel stepping down prematurely and being replaced by Kramp-Karrenbauer, who could benefit tremendously from taking the chancellorship ahead of the 2021 general elections.

No future for grand coalition

This refusal to endorse Kramp-Karrenbauer has put the coalition itself at risk and could necessitate snap elections. That's a scenario the SPD, which has for over a year seen its approval ratings hover near the 17% mark, 3 points fewer than at the last election, would surely like to avoid. But polls indicate that the CDU, too, would most likely have to contend with similar losses in an early election. Germany's two biggest parties thus potentially lack the seats needed to form yet another grand coalition.

Kramp-Karrenbauer could instead try to forge an alliance with the business-friendly Free Democrats (FDP) and the Greens, something Germany nearly saw after the 2017 general election. The three parties spent two weeks negotiating a future coalition government until the FDP pulled out of talks. But now, two years later, it may be the Greens who are hesitant to team up with the CDU. The environmentalist party's approval ratings are rising, with the latest polls indicating it could win as much as 20% of the vote. The Greens will thus likely be eager for fresh elections.

It may in fact be the Social Democrats who determine how much longer Merkel stays in power. After all, the coalition agreement states that all parties involved will evaluate their government once half the term is up, then decide whether to keep going or disband. The SPD is set to make its judgment at a party conference in December.

What the SPD opts to do will in part depend on how a series of key votes this year play out. In addition to the European Parliament vote on 26 May, Bremen is holding state elections the same day. Moreover, nine states hold district assembly, municipal and district council elections on that day, as well. On September 1, the states of Brandenburg and Saxony hold parliamentary elections, and Thuringia follows suit on October 27.

Should the SPD struggle in these elections, it will embolden the vast number of party members who opposed joining the CDU in the first place. And if this camp gains enough support, they could vote to pull out of the grand coalition, putting the SPD into opposition. That, in turn, would put an end to Merkel's chancellorship. She could make an attempt to revive coalition talks with the Greens and FDP, though it is unlikely this would bear fruit.

Kramp-Karrenbauer could potentially find herself moving into Merkel's office by 2020.

Angela Merkel will bid farewell to the chancellor's office in Berlin in 2021. The outgoing president of the European Commission thinks she is "a complete and endearing work of art" who would do well in Brussels. (20.04.2019)