Clues to CDU′s post-Merkel leadership on show at conference | Germany| News and in-depth reporting from Berlin and beyond | DW | 14.01.2019

Clues to CDU's post-Merkel leadership on show at conference

Unity and decisiveness are the messages the CDU and its new leader Annegret Kramp-Karrenbauer are projecting to voters for 2019 — a year of many elections and a looming Brexit. Christoph Strack reports from Potsdam. 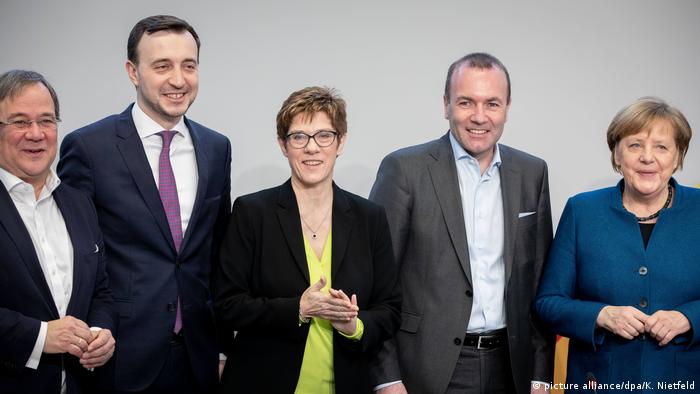 Friedrich Merz wasn't there, yet it was as if he were standing in the Kongresshotel Potsdam conference hall the entire time.

On the opening evening of the two-day closed meeting of the Christian Democratic Party's (CDU) leaders,  Merz — the candidate who was defeated in the race to succeed party leader Angela Merkel and last week shot down speculation he would serve as a party advisor — was the subject of discussion for many Christian Democrats. That was especially the case for part members who, like him, are Merkel critics. In various interviews at the Potsdam meeting, the CDU's new leader, Annegret Kramp-Karrenbauer, dismissed speculation about Merkel's successor in the chancellor's office, while at the same time stressing that the party leader has the right of first choice.

The new distribution of roles within the CDU has now become apparent. Merkel, who gave up her post as party chair after more than 15 years at a CDU conference in Hamburg at the beginning of December, was relaxed as she sauntered through the conference rooms. She did not speak in front of cameras or on the sidelines with reporters, and in the conference hall, she sat beside her successor at the party leaders' table. 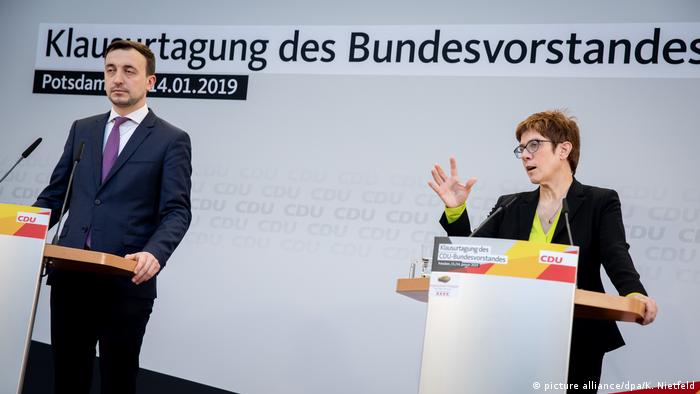 Kramp-Karrenbauer, who after one and a half years as the party's secretary general prevailed against her rivals Friedrich Merz and Jens Spahn in the leadership race, was omnipresent at her first major CDU meeting, regularly standing in front of a CDU-themed movable wall to give statements. When Paul Ziemiak, the party's new secretary general, stood beside the 56-year-old new party leader, the 33-year-old successor came across as more of an apprentice or assistant. You simply don't start out as a boss. But Kramp-Karrenbauer, the fast-speaking party leader who is on top of every topic, occasionally leaves the floor to Ziemiak.

One of the issues many board members are curious about is how the party will deal with Merz over the coming months, as well as accounting for the government's refugee policies since 2015. Even before Kramp-Karrenbauer took on the party leadership, she indicated setting up a debate to assess the refugee issue — also to prevent Merkel's party from being eternally stuck with the topic, much like the Social Democrats (SPD) are forever linked to Chancellor Gerhard Schröder's highly divisive "Agenda 2010" social reforms. The refugee debate is scheduled to take place in Berlin February 10 and 11, probably without Merkel. "We want to find out what exactly has happened so far, where we stand today and what do we have to do or change," Ziemiak said.

Reassuring the public on refugees, economics

At the two-day meeting, Kramp-Karrenbauer plans to speak to people who actually work and deal with refugees, hoping to contribute to getting a grip on the "nervousness and uncertainty" that crop up in Germany in the wake of cases of violence by refugees or asylum seekers.

Compared to other European countries, Germany in 2019 is marked by "stability and prosperity," Kramp-Karrenbauer said, but she warned that both prosperity and growth are a bit "long in the tooth." That is why modernization and adjustments are needed in questions of the economy and structure as well as security, she argued.

The CDU party leader would like to present Germans with concrete financial relief in at least two cases: Firstly, by getting rid of the "solidarity surcharge," which the Bundestag introduced almost 29 years ago to rebuild East Germany after the fall of the Berlin Wall, and which is to be gone by 2021 at the latest. Secondly, the CDU would like to quickly introduce a "basic pension," which would be especially important for people in East Germany.

State elections are pending this year in three of the five eastern German states. Speaking at the Potsdam CDU meeting, Mike Mohring, head of the Thuringia CDU, pointed out much-needed "esteem" in view of the difficult times for citizens in East Germany who had to make do with meager retirement pay. He mentioned his mother who had worked for 45 years and yet had a small pension. These people need to be paid visibly more than the basic income for people who never worked at all, he said. It remains to be seen whether that translates into €100 ($115) or ten percent more, and also how the scheme can be financed, but it is something the CDU wants to tackle quickly.

The party displayed itself united on its candidate for the European elections in about four months' time: Manfred Weber of the CDU's Bavarian sister party, the Christian Social Union (CSU), who has so far headed the conservative EPP parliamentary group in the EU Parliament. It is the first time the CDU and the CSU have a common top candidate. The parties also want to coordinate their European election campaign strategically and in terms of content — proof that the conservative parties are presenting a closer collaboration than they have in many years.

Kramp-Karrenbauer and Weber can continue to work on that closeness at Saturday's CSU party conference in Munich, given that both are attending as guests. The meeting is also expected to decide on a change of CSU leadership — with leader Horst Seehofer, who has led the party since 2008 and also currently serves as German Interior Minister, likely to hand over the party leadership to Bavarian State Premier Markus Söder. The CSU delegates can look forward to a self-confident CDU leader, armed with her message of consolidation and decisiveness.