Why is the eastern German state of Saxony so often associated with right-wing extremism? Henrik Böhme believes that while the rampant racism is inexcusable, the Saxons are widely misunderstood. 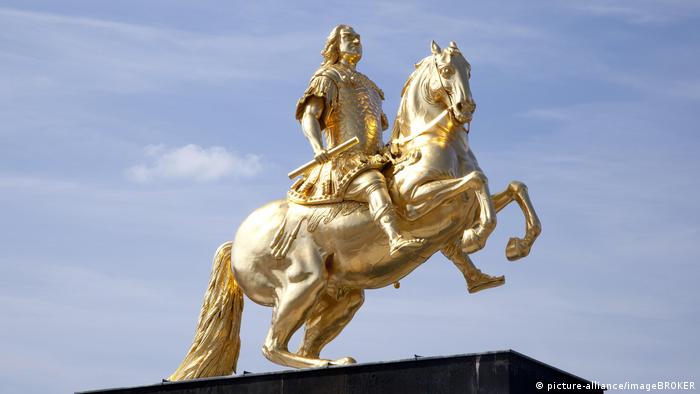 Let's start with the basics. Football. What a stir it caused when, in the country of the dethroned world champions, a team by the name of RB Leipzig managed to advance from the lowly fifth division to the Bundesliga in the space of a few years. The outcry was great. A club from the East! Backed by millions from energy drink maker Red Bull! Such were the reactions in Munich, Dortmund and elsewhere in western Germany. Leipzig endured their scorn, and responded with force: They were runners-up in their first season in the top league.

Another example of the inimitable Saxon character? In 2013, a new bridge was slated to be built across the Elbe River in the state capital, Dresden. But the UN heritage body UNESCO complained that its design would spoil the stunning vista of Elbe valley, and threatened to strip the city of its World Heritage title. Nevertheless, the bridge was built, and as threatened, the city lost its title. But who cares? Certainly not the people of Dresden! That's just how they tick, these Saxons.

Saxony: a history of setbacks

If you want to understand the Saxons, you need to know a little of their history starting with Augustus II the Strong (pictured above), the elector of Saxony in the late 17th century. The former king of Poland left a lasting mark on the eastern state where he was born.

The Saxons still revel in this sense of grandeur. And this attitude of superiority has helped them through difficult times such as 200 years ago, when they suffered a humiliating defeat at the hands of the Prussians.

In the Battle of Leipzig in 1813, the Saxons were again on the losing side when Napoleon Bonaparte's army was defeated. A searing setback on home turf. And so history rolled on. And this historical trajectory continues to inform the Saxon attitude today.

Such a historical narrative does something to people. It unites them, it drives them. This force of the underdog becomes something of a virtue – one that is proudly paraded in front of others. 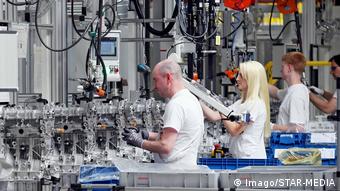 Industry has returned to eastern Germany, like at this Volkswagen engine manufacturing plant in Chemnitz

The Saxons' inventiveness is also legendary, as is their diligence. The notion of the genius German engineer was born in Saxony. The Chemnitz University of Technology enjoys a worldwide reputation of excellence in mechanical engineering. No wonder Saxony was the strongest industrial region in Germany until World War II.

Germany's first car company was at home in Zwickau, before the Volkswagen city of Wolfsburg even existed. For the textile industry and for mechanical and electrical engineering, Saxony was a prime location.

The peaceful revolution: a triumph of Saxony

The Saxons are a unique and peculiar people. They're often ridiculed by other Germans because of their dialect. But they refuse to be silenced by such contempt. They are a people who are not easily silenced. And they are the ones who first called out, "We are the people!"

In the autumn of 1989, the Berlin wall crumbled, and with it, a regime was swept away. But the peaceful revolution did not originate in Berlin, Brandenburg or Mecklenburg — it started in Saxony. It was there that people took to the streets in Leipzig, Plauen, and Dresden — not in Berlin, Schwerin or Potsdam. Germany's unity is the result of Saxon courage.

But German reunification, which inspired so much hope, is today also one of the reasons why people in Chemnitz and elsewhere in Saxony are once again taking to the streets. 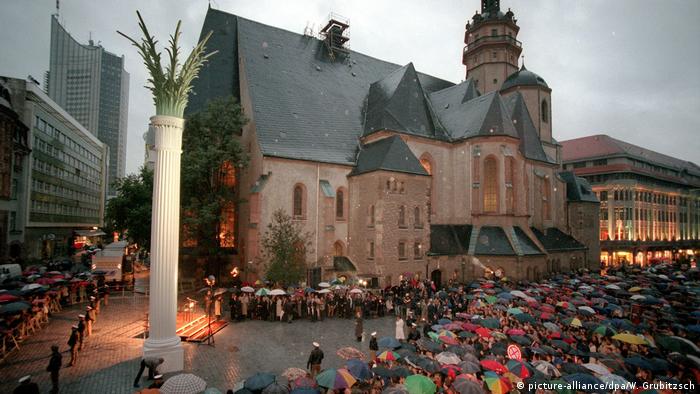 The protests that brought about the downfall of the GDR began in Leipzig outside St. Nicholas Church. The column serves as a memorial to the peaceful revolution

Many people in the former East Germany still feel they're being bullied by people from the western part of the country who largely remain at the helm of the country's authorities and administrations. A Saxon representative from Chancellor Angela Merkel's Christian Democratic Union (CDU) party, Arnold Vaatz, once a frontman of the peaceful revolution, talks of a "tsunami of arrogance" that has swept over the country since 1989.

Saxony's economy, or rather what was left of it after World War II and 40 years' of planned economy in the GDR, was destroyed after reunification. In the initial years after the fall of communism, an estimated 80 percent of industrial jobs disappeared in East Germany. The competition was certainly eliminated. And it was never able to be fully revived.

The Saxon way: pick yourself up, dust yourself off

It is, however, worth noting that the Saxons don't give up. Today, the state is once again home to car factories; billions are invested in computer chip manufacturers, the mechanical engineering sector is alive again, there are world-class universities and beautiful old towns.

Saxony is booming. The unemployment rate is lower than in North Rhine-Westphalia. So why are people still so disenchanted, to the point that they are taking to the streets? Do the Saxons just hate foreigners?

DW's Henrik Böhme was born in raised in the city of Leipzig, Saxony

There are no simple explanations. The situation today is the result of a multitude of factors. One of those factors is the labor market reforms of 2002, principally the welfare payment known as Hartz IV. The changes came at a time when the so-called "Monday demos” that contributed to the downfall of the GDR were being revived. That's because a lack of confidence in politics and politicians has a long legacy, especially in Saxony. Despite its economic recovery, there is a large class of people who are dependent on welfare payments. Many of them feel like they've been relegated to the status of second-class Germans forever. Pensions and incomes in eastern Germany are still lower than in western states.

Where does the fear come from?

The departure to West Germany of many talented, engaged and industrious young people in the post-reunification period has also had a significant impact on the attitudes of East Germans. Frank Richter, the former civil rights activist and long-time director of the Saxon State Agency for Civic Education, explains that those left behind feel utterly abandoned and, therefore, are more susceptible to populist, right-wing slogans.

It has also created an atmosphere where anger and hatred are easily directed against foreigners, even though in Chemnitz, the immigrant population is relatively small compared to western German cities. The xenophobia also has to do with a lack of real experience with foreigners. And when an uncontrolled wave of immigration comes along, as occurred in 2015, people became afraid.

To be unequivocally clear: Nothing, absolutely nothing, justifies violence against refugees or foreigners. This is sentiment that is held by most people in Saxony as well.

But equally, we should not brand Alternative for Germany (AfD) voters or the demonstrators in Chemnitz as "extreme right” – with the exception of the neo-Nazis of course.  Nor should we dismiss them as backward or stupid. Next year, the AfD could become the strongest political party in Saxony's state elections. In Saxony, of all places, where the roots of German social democracy lie.

Like I said, they're a peculiar people, these Saxons.

Saxony state leaders have held a "meet the voters" event in Chemnitz after days of far-right protests sparked by a killing. Locals decried the way their city has been portrayed during a troubled week of violence. (30.08.2018)