Saxony state leaders have held a "meet the voters" event in Chemnitz after days of far-right protests sparked by a killing. Locals decried the way their city has been portrayed during a troubled week of violence. 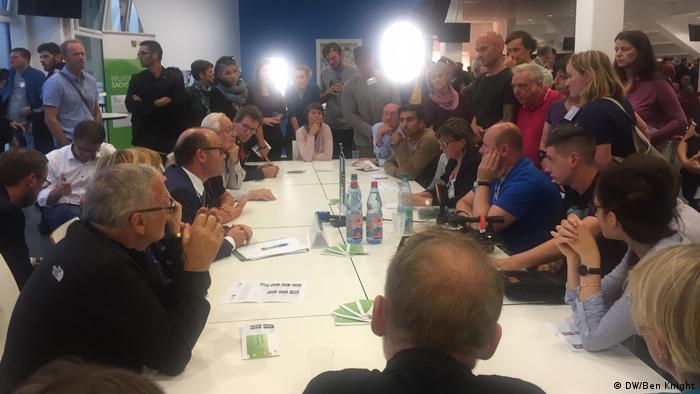 Saxony State Premier Michael Kretschmer traveled to Chemnitz on Thursday as part of a statewide election campaign tour. At the same time, a far-right rally, this time unopposed by an anti-Nazi counterprotest, took place on the streets.

The previously-scheduled event, designed to give Kretschmer the chance to speak to ordinary citizens, became a particularly sensitive gathering in the wake of the killing of 35-year-old Daniel H., apparently by two men of Syrian and Iraqi origin, and subsequent far-right violence in the city on Sunday and Monday.

Adding to the tense atmosphere, Pro Chemnitz  — the same far-right group that had organized Monday's protest, at which several people were filmed giving Hitler salutes — called another rally outside the city's sports stadium, where Kretschmer's event was taking place. The group did not respond to a DW request for comment on whether it would be undertaking any measures to stop people giving Nazi salutes on Thursday.

This time, far fewer than Monday's 6,000 demonstrators appeared, and, perhaps because of the lack of a counterprotest, there was less potential for street violence. Nevertheless, at least two individuals appeared to face down the rally, which resulted in noisy, raging shouting matches, but no violence.

Protests in Chemnitz: What is the root of this hate?

Despite much antipathy to being "stamped as Nazis" by the press (a consistent source of anger throughout the evening, both inside and outside the stadium) the anti-immigrant sentiment was palpable everywhere.

One man carried a placard that read: "If donkeys and sheep govern, Chemnitz will become an African enclave," illustrated with a grotesque caricature of an African. When confronted by a young man, he went on to furiously deny that the picture he was carrying was racist: "It's just a fairytale character!" he shouted.

A man called Ed, who attended both far-right demos this week and who spoke with a Dutch accent and wouldn't give his surname, spoke amiably about how he had nothing to do with racism, and theorized that those giving Hitler salutes were planted by the state secret services to discredit the demo. "Anyway, how come no one complains when politicians join left-wing demos that turn violent?" he added. 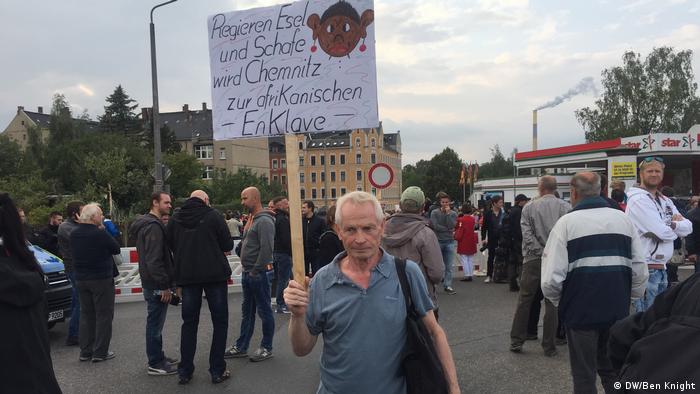 At the rally outside the stadium, one man carried a sign reading: 'If donkeys and sheep govern, Chemnitz will become an African enclave'

Inside the Chemnitz stadium's event venue, where the Saxony government had come to face the voters (there's a state election next year), the mood was only slightly less hostile. The large room was filled with at least 600 people of all political sympathies, which became evident when Kretschmer began his introductory speech to alternating rounds of applause and boos.

After a minute's silence for Daniel H., there was an immediate applause when the state premier said he had heard from many people that they were sick of being dismissed as far-right radicals.

Those feelings were raised again and again in the discussions that followed, when each minister sat at a table face-to-face to the general public.

One man angrily berated Interior Minister Roland Wöller for allowing the people of Chemnitz — or at least the 6,000 or so who had taken part in Monday's far-right demonstration against immigration policy — to be besmirched by the press and politicians. He also said the Nazi accusations only "divided the city."

When Wöller agreed with him that Chemnitz was being unduly criticized, the man responded: "Now you're saying that, in this small forum, but for the whole week you allowed it to happen!"

There were also plenty of boos and whistles (and some cheers) for Mayor Barbara Ludwig after she condemned the pogrom-like scenes on Sunday, when people attacked immigrants on the streets. 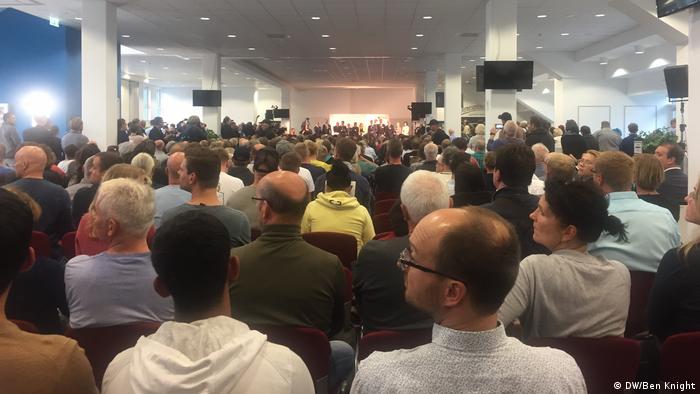 But there were also people in the room who tried to take a more level-headed view. "I think the state government is trying hard to recreate a relationship with the population again through dialogue, because a lot of people don't feel represented anymore," said Volkmar Zschocke. "Whether they succeed I don't know, because I hear the state premier promising a lot, which makes me wonder: How does he want to achieve that?"

"Unfortunately I hear a lot of noises from him that prepare the ground for the AfD," he added, referring to the far-right populist Alternative for Germany party. Zschocke had no sympathy for those Chemnitzers who felt they were being unfairly characterized by the media.

"I went out on the streets in '89 to fight for press freedom, and press freedom means there are different media outlets," he said. "You have to be able to stand that in a democracy, and I have the impression that many Chemnitzers find it hard to stand that. It's very unsettling that a lot of people think they can go round with people doing a Hitler salute, and then stand there saying, 'we have nothing to do with neo-Nazis.'"

Earlier in the day, Bündnis Chemnitz Nazifrei (Alliance Chemnitz Nazi-free), the group who organized the counterprotest on Monday that attracted over 1,000 people, angrily criticized the Saxony police and government for failing to provide enough protection.

In a Facebook post explaining why there would be no anti-Nazi demonstration on Thursday, the group said Monday's events had "shown us, that the police are currently not willing or able to guarantee our basic right to the freedom of assembly or physical safety."

The statement went on to say that the group did not see "any will to improve the situation" on the part of Kretschmer's government. Instead, the group has called another anti-Nazi demonstration for Saturday.

Further inflaming the community relations, a politician in the western city of Bremen has been accused of illegally publishing the arrest warrant of the two suspects in the killing of Daniel H.

The home of Jan Timke, a state representative in the Bremen parliament for the far-right group Bürger in Wut (Citizens in Rage), was searched by police on Thursday after photos of the arrest warrant appeared on his Facebook page. The warrant was previously released on a website named Anonymous.

Despite promising to release a statement about the accusations, Timke did not respond to a DW request for comment, and the post featuring the warrant has also been taken down. A prison guard has now admitted to leaking the document and has been suspended from duty.