A fatal stabbing, calls for far-right protests and counterprotests, clashes in the streets: How could events unfolding in the eastern German city of Chemnitz get so out of hand? DW chronicles what happened. 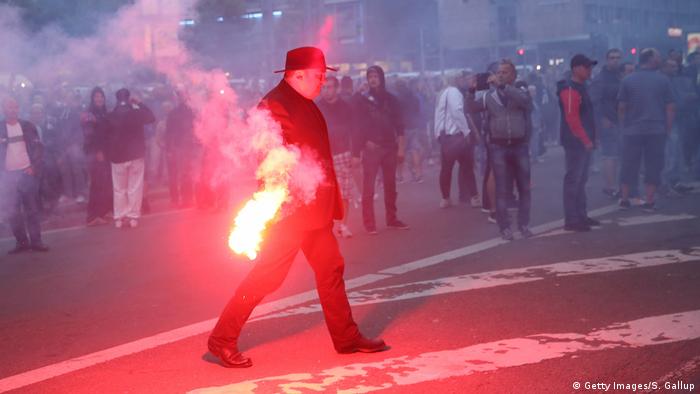 What started the unrest?

Late on the evening of Saturday, August 25, a group of men got into an argument. The details are not yet entirely clear, but one of them did pull out a knife. Three people were injured; one of them died in hospital. The story quickly spread online, with a particular focus on the nationalities of the men involved. The 35-year-old who was stabbed to death, Daniel H., was German. A 23-year-old Syrian and a 22-year-old Iraqi man were suspected of having killed him.

The suspects were taken into custody on Monday and charged with manslaughter. Details of the events and possible motives are unclear; the prosecution has remained silent. Investigators say, however, that the stabbing was not done in self-defense.

What happened on Sunday and Monday?

On Sunday, a far-right group of hooligans announced a meeting time and place for "fans and sympathizers" to show people "who is in the driver's seat in the city."

Roughly 800 people turned up, among them members of the right-wing extremist community. Video footage from the fringes of the ensuing march shows protesters intimidating people they took to be foreigners, chasing them down the street. On Monday, the German government denounced such "hounding," saying it has "no place on our streets."

Police received complaints from a 15-year-old German woman and her 17-year-old Afghan companion who said they were attacked, an 18-year-old Syrian who said he was beaten and a 30-year-old Bulgarian man who said he was held and threatened. Video footage also shows demonstrators attacking police officers. Police used pepper spray and truncheons to regain control of the situation.

On Monday, thousands of people gathered in the heart of the Chemnitz. Police, who say 6,000 people attended in support of the far-right group Pro Chemnitz, while another 1,500 people protested on the side, including left-wing groups, managed to keep the opposing sides apart until 9 p.m., when the situation began to deteriorate. Protesters threw fireworks, bottles and other projectiles. On the defensive again, the 600-strong police force brought in two water cannon as a deterrent.

Several far-right protesters performed Nazi salutes. Police have started preliminary proceedings in at least 10 cases. As many as 18 protesters from both sides and two police officers were injured. Four far-right protesters were attacked and injured on their way home by a group of 15-20 people; two were hospitalized, police say.

How has Germany reacted to the violence?

In a Deutschlandfunk radio interview, Alexander Dierks, secretary-general of the conservative Christian Democratic Party (CDU) in the state of Saxony, rejected accusations that the state government had underestimated the threat from the far-right. Referring to the Monday riots, he said the Saxony police were prepared and "managed to enforce law and order." Germany's GdP police union praised the officers' "outstanding work," while a Saxony police spokesman conceded that law enforcement had underestimated the number of protesters.

'Right-wing radicalism was not taken seriously'

"Since the 1990s, such attacks have sadly been consistent in our country," said Atila Karabörklü, head of the Turkish Community in Germany and one of many who were horrified by the hundreds of far-right protesters who marched through Chemnitz on Sunday.

Karabörklü specifically cited the 1992 riots in Rostock-Lichtenhagen, which lasted for days and resulted in the burning of an asylum shelter. There is a "link between the pogroms in the 1990s and the inactive government and the National Socialist Underground murders and the government that turns victims into perpetrators," he said.

Saxony governor Michael Kretschmer, meanwhile, vowed that the state would not be stripped of its power and condemned the far-right extremists' "political instrumentalization" as "heinous."

Whoever threatens and attacks people and agitates against minorities must "immediately be brought to justice," Katarina Barley, Germany's justice minister, told the Handelsblatt newspaper, adding that there can never again be "hounding and vigilantism" in Germany.

Chancellor Angela Merkel and Interior Minister Horst Seehofer have offered federal support to Saxony's police. "In no square and on no street should it come to rioting," Merkel said.

Merkel: Events in Chemnitz 'incompatible with the rule of law'

For years, far-right extremists and xenophobes have tarnished Saxony's reputation and that of its 4 million inhabitants. The neo-Nazi National Socialist Underground terrorist group hid in the state until being exposed in 2011. The right-wing nationalist PEGIDA movement has held regular protests in Dresden since 2014. In Heidenau, far-right activists clashed with police in 2015 over a refugee shelter set up in a former hardware store.

Earlier this month, Saxony police were criticized after preventing a television team working for public broadcaster ZDF from filming during an anti-Merkel rally. One of the protesters who objected to the TV crew's presence later turned out to be a state police employee.

Extremism and xenophobia are by no means a problem specific to Saxony —  xenophobic attacks occur throughout Germany. Last year, there were 1,713 criminal acts directed at refugees, according to advocacy group Pro Asyl and the Amadeu Antonio Foundation. Saxony is listed 240 times, which makes 61 cases per 1 million inhabitants. The state of Brandenburg tops the list with 85 cases per 1 million inhabitants. Overall, there has been a recent decline in the number of attacks against refugees.