Many high-ranking German politicians joined Chancellor Merkel in issuing a blanket condemnation of racism and violence. However, anti-immigration voices in the corridors of power were less vehement. 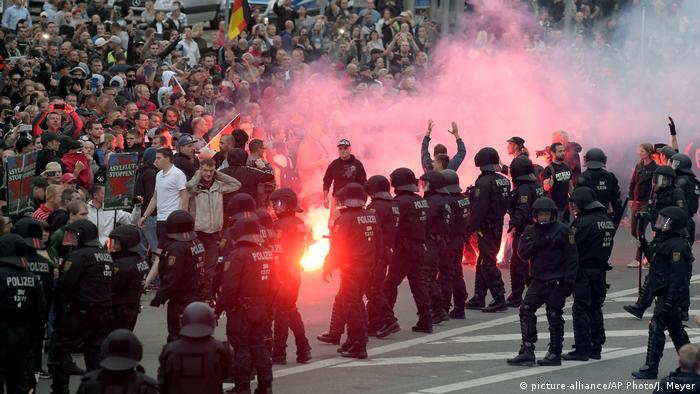 "We have video footage showing that there was targeted harassment, that there was rioting, that there was hate on the streets, and that has no place under our rule of law," said German Chancellor Angela Merkel on Tuesday, offering a clear-cut and uncharacteristically forceful view of the violence that erupted in the eastern city of Chemnitz over the weekend and on Monday.

"In no square and on no street should it come to rioting."

Nearly every prominent politician in Germany felt compelled to comment on the clashes between far-right protesters, police and counterdemonstrators on Monday, which were touched off by a weekend brawl that ended in the stabbing death of a 35-year-old German-Cuban man.

The fact that his alleged assailants were immigrants (an Iraqi and a Syrian national have been detained) was exploited by local extremists who called for a far-right rally against foreigners.

Steinmeier: Let us not be intimidated

In response to the events, most lawmakers echoed Merkel's sentiments in a blanket condemnation of racism and violence.

"The shock of an atrocity was abused in order to bring xenophobia and violence onto the streets of the city," said German President Frank-Walter Steinmeier. "Let us not be intimidated by a mob of punching hooligans…hate should not have free rein anywhere in our country."

Interior Minister Horst Seehofer, who has been in a highly-publicized feud with Merkel over his desire to curb immigration, was more muted in his disavowal of the far-right, and focused instead on the stabbing: "My deepest sympathies are with the loved ones of the knife attack victim…but I want to say clearly, that nothing justifies the call to violence or violent riots."

The Alternative for Germany (AfD) party was split down the middle, with some inside the party distancing themselves from the right-wing demonstrators and calling off their own planned rally, and others suggesting that the media had blown the situation out of proportion.

"The AfD expressly distances itself from any form of violence and expressly warns against participation in the demonstrations that have been called…by the [neo-Nazi — Editor's note] NPD among others," said Jörg Urban, the leader of the AfD in the state of Saxony, where Chemnitz lies.

But in neighboring Hesse, where the party hopes to enter parliament for the first time in October 28's regional elections, the AfD issued a statement on Facebook that questioned "what REALLY happened in Chemnitz?"

"That our 'quality media' sets aside the death of a 35-year-old German is exactly what has made the people of Chemnitz so angry."

The statement disputed the video evidence of a far-right mob, and insisted that "eye witnesses described a spirit of optimism and togetherness."

On Sunday and Monday evening, right-wing extremists marched through the eastern German city of Chemnitz. The ringleaders of the movement have well-established links to the local football hooligan scene, as DW explains. (28.08.2018)

The eastern German city has been recovering after being the scene of a far-right demonstration and violence. A fatal stabbing, blamed on a Syrian, preceded the unrest. Residents have not welcomed the new media attention. (28.08.2018)