The death of a 35-year-old German man drew spontaneous protests, organized by several far-right groups. Police struggled to control the rowdy crowds, some members of which allegedly chased and attacked foreigners. 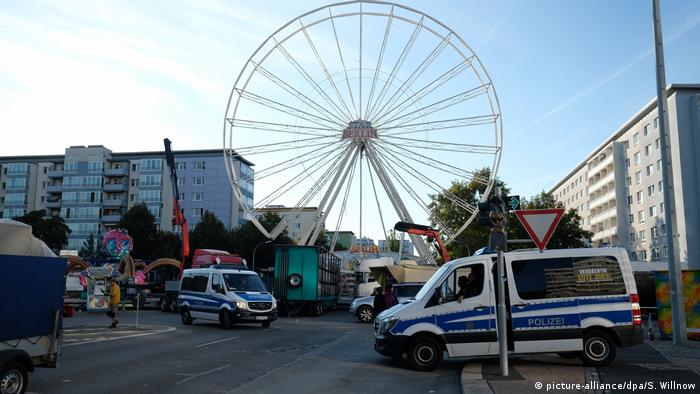 A street festival in the eastern German city of Chemnitz was canceled on Sunday, hours before it was supposed to conclude, after 800 people took to the streets to protest the death of a 35-year-old man.

The victim, said to be of German origin, was stabbed during an altercation that involved 10 people, several of whom were of "various nationalities," police sources said.

The brawl took place at around 3 a.m. local time (0100 UTC) on Sunday after the street festival closed on Saturday evening, and began with a verbal dispute. Aside from the victim, two men in their 30s were also stabbed and seriously injured, while two others, aged 22 and 23, were taken into custody.

Police had trouble clearing the unruly crowds that gathered Sunday afternoon, which included far-right groups. Authorities said they were generally uncooperative and hurled bottles at the officers. After police were overwhelmed by the spontaneous gathering, reinforcements had to be called from the larger nearby cities of Leipzig and Dresden.

Read more: City of Chemnitz: A city of clever heads

The mobilizations were spontaneous and are said to have originated by calls to demonstrate on social media. Among the groups that urged their supporters to take to the streets were the political party AfD, which is said to have gathered some 100 people on the streets. Bild reported that members of the right-wing "Kaotic Chemnitz" football group also were involved.

Video footage on social media appeared to show protesters assaulting people they thought looked non-German, but that footage has not yet been verified.

DW's Melinda Crane, who has been reporting on the incident for DW-TV, called the protests "absolutely coordinated and incited."

She said reports of the knifing had quickly found their way onto far-right websites that attributed the attack to migrants of what they called "southern origin" and urged people to protest.

Police sources told German magazine Der Spiegel that several people had filed assault charges, including one German man, a woman of Bulgarian descent and a man of Syrian descent.

Chemnitz Mayor Barbara Ludwig told local media that she was "horrified" after seeing what took place in her city on Sunday.

Authorities have not yet spoken on what caused the deadly overnight altercation, but according to German media, rumors circulated alleging that the dispute began after a woman was reportedly harassed. Police said these reports had no basis and in a tweet called on the public "not to take part in speculations."

The street festival, which ran all weekend, was set to conclude at 8 p.m. local time on Sunday, but was abruptly ended at 4 p.m. due to the confrontation between the police and demonstrators in the afternoon.

The right-wing movement "Pro Chemnitz" has called on Facebook for more demonstrations on Monday, while leftist groups have planned counterprotests.

Dresden's police chief has apologized for detaining a camera team from public broadcaster ZDF. The head of the German Journalists' Union said politicians cannot stand on the sidelines on the issue of press freedom. (25.08.2018)

Germany's government has said it confiscated firearms from hundreds of members of the Reichsbürger scene. Authorities have identified some 2,000 more people who identify with Germany's most idiosyncratic far-right group. (11.08.2018)