Angela Merkel has just returned from her summer holidays and she's already braving enemy territory. DW followed her to Dresden, a stronghold for far-right populists who have no affinity for the German chancellor. 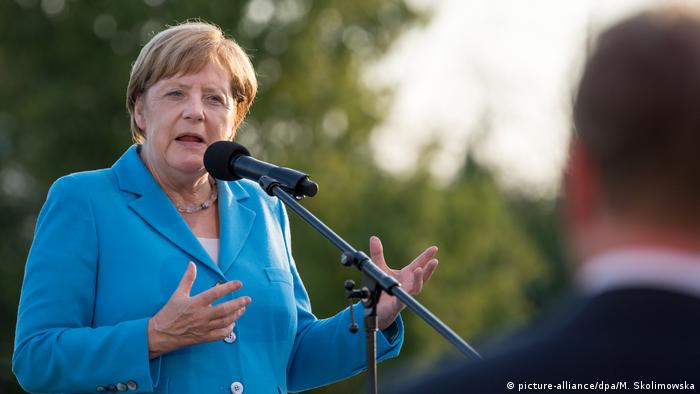 One of the lessons Angela Merkel drew from her conservative party's disappointment in last year's election was that she needed to do a better job communicating to the general populace the rationale behind her policies, particularly on migrants.

And no sooner had she returned from her summer break than she traveled to eastern Germany, where the far-right, anti-immigration Alternative for Germany (AfD) party is growing in strength. Although Merkel herself originally hails from the country's formerly communist East, she more than any other politician has been the focus of hostility for those in the region who fear that Germany is being taken over for foreigners.

That was only one of many ironies on display in Dresden, at the State Parliament of Saxony, where Merkel took part in a closed-door meeting with local conservatives before briefly speaking to the press. Dresden has been considered enemy territory for the chancellor since October 3, 2016, when crowds of angry right-wing populists celebrated Germany's national holiday by chanting anti-Merkel slogans in the streets.

On Thursday, those streets were full of transport trucks and people setting up carnival stands for the Canaletto, Dresden's annual summer festival, which begins August 17.  But some 600 to 800 supporters of the AfD and the anti-immigrant PEGIDA movement resisted the temptation of an early beer and lined up outside the parliament building to yell, boo, hiss and generally try to make the chancellor feel as unwelcome as possible — assuming she took notice of them at all.

Chants of 'Deportation!' to a brass quartet

PEGIDA supporters have been turning out in Dresden since 2014 to voice their displeasure generally at what they fear is an "Islamization" of Germany, and specifically at Merkel's refusal to turn away hundreds of thousands of migrants at the country's borders.

There was an air of familiarity among the protesters, the AfD and PEGIDA functionaries who headed the demonstrations and even the local reporters, who were greeted with well-worn cries of "lying press." Merkel-haters shouting slogans aimed at foreigners has become as much a part of today's Dresden as the Semper Opera House or the Elbe River.

They chanted "Volksverräter" ("enemy of the people") in reference to Merkel. It's a loaded word given its use, among other things, for those who refused to follow the Nazis to the bitter final end of the Third Reich. But that's as close as the Merkel-bashers got to employing Nazi terminology — whether they're constantly refraining from doing so in public is a matter of debate. For AfD supporters, critics who accuse them of Nazi views are themselves "left-wing fascists," another fashionable new chant on the far right.

Other than a comprehensive belief that Merkel is turning over Germany to criminal foreigners, it was hard to make out a coherent perspective uniting the demonstrators in Dresden. They were just as apt to begin theorizing about the pernicious influence of global capitalism as they were to shout out "Send Merkel to Africa with all of her friends."

They all knew their national anthem, though. When a brass quartet dressed in sailors' uniforms played a slightly mistuned rendition of the Deutschlandlied, the crowd sang along. And everybody knew the words.

Citizens' dialogue at a safe remove

At around 4:30 p.m. the highlight of the day was finally at hand. A cavalcade of black limousines pulled up in front of the Saxony Parliament, the chancellor got out and the crowd frenetically shouted "Merkel must go" — the slogan that is to the AfD and PEGIDA what "Hey Jude" was to the Beatles.

Not that the Merkel haters saw much of the object of their ire, though. A metal barrier, a handful of police and 300 to 400 meters (330 to 440 yards) separated the chancellor from the people who'd like to see her deported. Only their enraged voices drifted over the acrid August pavement, audible for sure, but only in the way that the cries from a summer festival or fair carry in from a distance.

Such is citizens' dialogue in the age of social media and right-wing populism. Merkel made no effort to talk with her detractors exercising their rights as citizens to assemble and bellow their views. It would likely have been little use even if she had. Merkel haters know what they believe and what they want. No nice words or arguments, no matter how rational or persuasive, are going to shake their fundamental conviction: "Merkel must go." 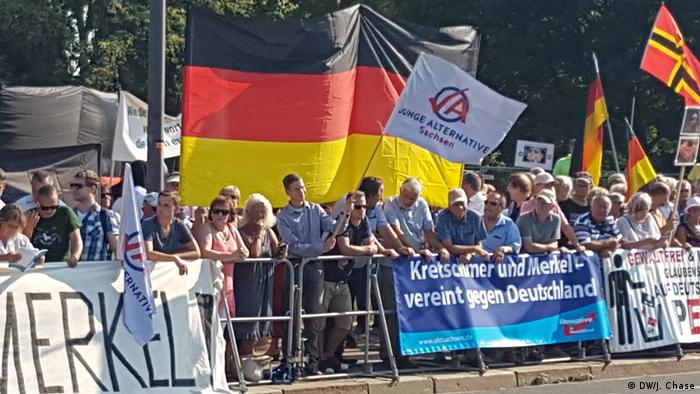 German flags were a popular accessory among anti-Merkel demonstrators

Where Merkel went was not to Africa, but to the parliament building to talk shop with Saxony's democratically elected conservatives. Reporters congregated outside the parliamentary chambers in a foyer featuring a bar with apple juice, sparkling water and champagne. Against a bank of windows overlooking the river, a musical trio played jazz standards. The river level was extraordinarily low due to the summer drought.

Then Merkel, entirely in her element and unflappable as ever, gave a brief statement. The day's discussions, the chancellor said, had covered everything from bridging the gaps between urban and rural Germany, to Saxony's coal-mining industry, to the problem of wild wolves — the nuts and bolts of governing. Of course, she didn't neglect to mention her political Achilles' heel, the migrant issue, either.

"We have a situation in which not all problems are solved, but 2015 will not and should not be repeated," Merkel said. "We have a completely new situation."

By the time the press conference was over, the protesters had dispersed to do whatever PEGIDA supporters do when they're not on the streets. Maybe they were grabbing a pre-Canaletto beer or wine after baking in the sun. Or maybe they just went home to get online and tell their social media friends about how they really gave Angela Merkel a piece of their minds.