Media and migrants: How journalists help fuel populist momentum | Germany | News and in-depth reporting from Berlin and beyond | DW | 21.07.2018

Polls say that migrants aren't what Germans are most concerned about. So why do the media and politicians push the topic so much? Is the AfD profiting from their mistakes? DW's Jefferson Chase takes a self-critical look. 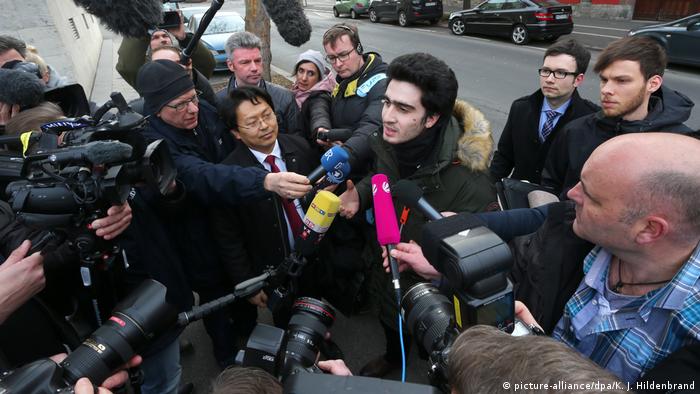 It's a result that has given journalistic and political Berlin pause for thought: Germans are more concerned about old-age poverty and affordable housing than about migrants. At least that's the finding of a recent Emnid poll for the Bild am Sonntag newspaper, which asked people to identify their two top concerns from a list of 20. Migration came in a distant 13th.

Even before last year's national election, in which the far-right, anti-immigration Alternative for Germany (AfD) party took 12.6 percent of the vote, reporters fretted about the attention given to the populists and their main issue. "We report on this party as though they were a 40-percent one," complained Lutz Kinkel, a former journalist for the popular magazine Stern, in a highly regarded documentary film.

I decided to do a self-check. Looking back at the last 100 articles I wrote for this website I found that, without including the topic of terrorism and crime, 28 of them related to migrants, asylum or the AfD. That's about par for the course. Indeed, a 2017 study on mainstream reporting about the large numbers of people arriving at Germany's borders as of 2015 found that news outlets published up to 17 stories a day on what became known as "the migrant crisis."

Contrary to what you might think from media reports, Germans are not obsessed with migrants

Are we force-feeding audiences information they don't want and skewing the political agenda? Pollsters and politicians say yes — and no. The migrant issue per se isn't the most important one for ordinary Germans, Torsten Schneider-Haase, the man responsible for the Emnid poll, told me. But it is one that can be connected with other social issues, such as high rent prices, that influence people's attitudes.

"You may ask yourself who's responsible for high rents, and there migration could play a role in the minds of people we asked," Schneider-Haase said. 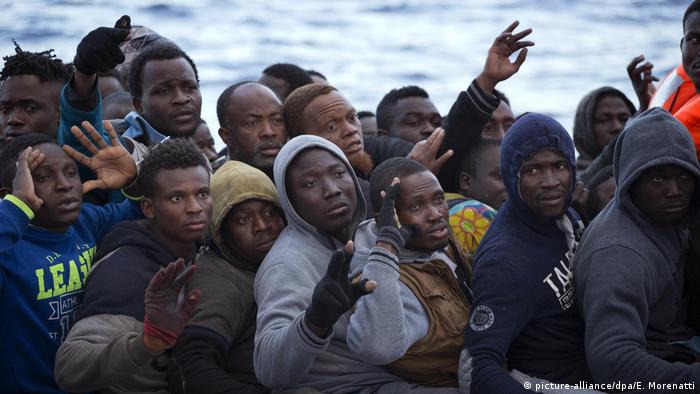 Media researcher Paula Diehl from the University of Bielefeld has identified a disproportionate focus on "Muslims, integration and refugees" among journalists and politicians, particularly in the run-up to the 2017 general election.

"As soon as topics become omnipresent in the media, they become concrete — that means they exist as important issues independently of whether they're important outside the media or not," Diehl told me.

In other words, constant media chatter can turn a topic of relative importance into the central issue. One possible example of this came in the final days of the 2017 campaign. On August 22, only a month before the election, Chancellor Angela Merkel's conservatives were polling at 39.5 percent and had a commanding lead over her rivals, the center-left Social Democrats (SPD). The election with its seemingly foregone conclusion appeared boring, almost like a nonstory. Reporters cast around frantically for aspects to write about.

With the Barcelona terror attack of August 17 fresh in the German public's mind, the AfD, then polling at a mere 7 percent, relaunched their attacks on Merkel's welcoming policy toward migrants. A press conference held by party leaders Alice Weidel and Alexander Gauland on August 21 was packed to the rafters. When Germans went to the polls on September 24, the AfD's share of the vote was almost double that predicted only a month before, and conservatives tumbled to 32.9 percent.

Merkel was forced into months of negotiations to form a stable governing majority, and the media haven't stopped talking about migrants and the AfD since. Diehl thinks that journalists often unwillingly aid populists because the two groups operate according to similar criteria. Both groups seek to explain complex subject matter in simple terms, to maximize conflict potential and to personalize and emotionalize the stories they tell.

"It's not just that the AfD exploit the media — it's a symbiosis," Diehl said. "Ratings improve when you report on the AfD. You're dependent on them. And if this dynamic builds and builds, you get to a point where right-wing populists dominate media discourse."

One possible end result: Although the number of asylum applicants in Germany has declined from 800,000 at the height of the "crisis" to 200,000, there has been no commensurate reduction in articles about them and those who want to keep them away. 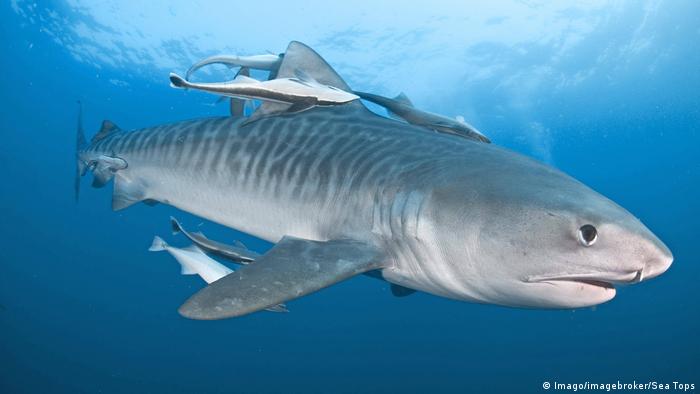 This sounds a bit like symbioses in nature, such as that between remoras and sharks — with reporters like me in the remora role. But there's another factor attaching the media to the migrant haters: Technology has changed not only how journalists write but what they write about with what frequency.

Headlines are search-engine optimized with as many popular terms as possible crammed at the front — grammar be damned. Only the first 56 characters of a headline and 156 characters in a teaser count. A story without an accompanying hashtag is unlikely to gain much traction.

What was the top hashtag used alongside the 2017 election? #AfD. Which one had the highest engagement rate? #AfD. Which German political party led the pack in using social media and particularly Twitter in the election? The AfD.

Media expert Wolfgang König of the University of Koblenz-Landau says it doesn't matter that much of what is written about the right-wing populists on social media is negative or that most Germans don't use Twitter. Journalists, many of whom are Twitter junkies, pass on what's hot on social media to users and viewers in the belief that's what the latter are also craving. And that may leave reporters open to manipulation by political parties.

"The refugee issue is prepared by professional media advisers and posted on Facebook and Twitter, where it gets reactions," König explained. "One example is our study on the main TV debate (between Merkel and her SPD challenger, Martin Schulz) during the 2017 election. The topic of refugees dominated Twitter during the entire debate because it was the focus of the first hour of the TV broadcast."

In other words, while Merkel matched wits with Schulz head-to-head, the main beneficiary may have been the AfD. 'A distorted picture with less and less to do with reality'

And what do the politicians think? Even representatives of Germany's current governing grand coalition of conservatives and the SPD say migration is getting too much press — which makes their jobs tougher.

"What people are really concerned about are everyday things like good jobs, affordable rents, good education for children. Security and having enough money in old age," said SPD Member of the Bundestag Sonja Steffen. "Some politicians, in particular the AfD, artificially push the entire complex of migrant issues." 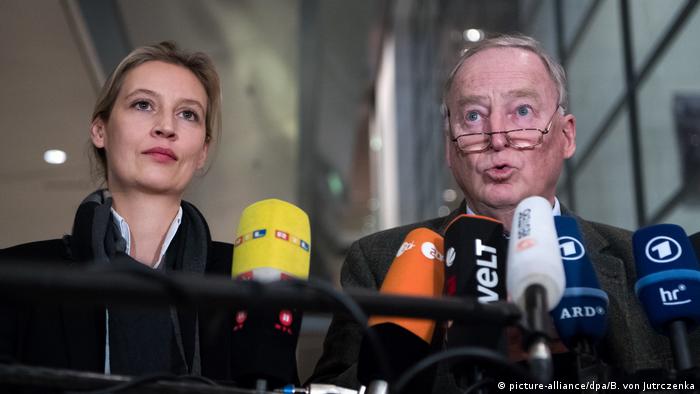 AfD leaders like Weidel and Gauland get disproportionate air time

Germany's other opposition parties — the business-friendly Free Democrats (FDP), the Greens and the Left Party — are particularly frustrated by the predominance of the AfD's main issue. They complain of being drowned out when they try to draw attention to other topics. FDP Secretary-General Nicola Beer, for instance, would like to see more attention paid to digitalization, tax cuts and infrastructure investments — as well as reforms to asylum and general immigration rules

"My great worry is that we're neglecting the future of our country, if we don't start giving long-term issues the attention they deserve," she said.

On the opposite side of the political spectrum, Left Party head Bernd Riexinger said: "Since 2015, refugees and the AfD have dominated the media and politics, pushing all other issues to the margins. The fact that far fewer refugees are coming to Germany hasn't changed that very much. It creates a distorted picture with less and less to do with reality."

We in the media clearly contribute to this problem, even if neither politicians nor pollsters nor professors have any simple answers for what we should be doing differently. Perhaps greater self-awareness is a step toward greater balance. The vast majority of journalists and their editors, I believe, do want and try to tell a representative variety of stories from the societies they cover — despite the competition in the sector and the pressure to generate internet hits and ratings shares.

Maybe in future, journalists can do more to set rather than follow agendas. After all, it's the shark, and not the remora, that determines the direction of the swimming.