Muslims in the EU: Feeling at home despite discrimination | Europe| News and current affairs from around the continent | DW | 21.09.2017

Muslims in the EU: Feeling at home despite discrimination

A new study shows that while Muslim immigrants integrate well in their countries of residence in the EU, they still experience a lot of discrimination. However, the numbers vary dramatically from country to country. 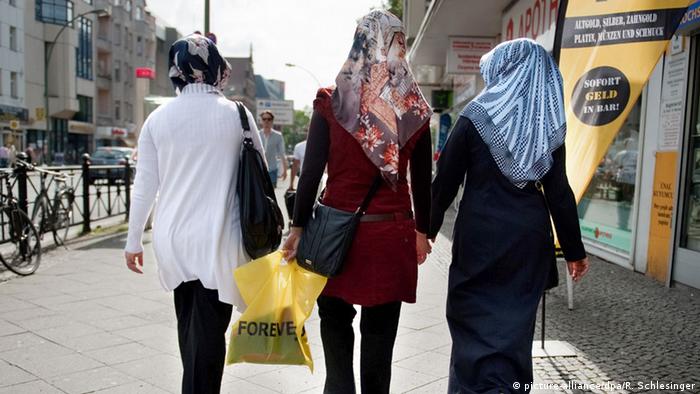 The majority of Muslims in the European Union feel at home in the countries they live in, even though many have experienced discrimination. That's one of the key findings in a study released by the European Union Agency for Fundamental Rights (FRA) on Thursday. The agency is an independent body that delivers fundamental rights assistance and expertise to the EU and its member states

For the Muslim-focused edition of the "Second European Union Minorities and Discrimination Survey" researchers talked to 10,527 people last year in 15 EU countries including Germany, Italy and Sweden. Some 76 percent of participants said they felt strongly attached to the country they live in. Many also report having a strong trust in institutions like the police and parliament.

"I am encouraged by the confidence of Europe's Muslim communities in our public institutions and rule of law, despite the individual challenges of discrimination which they attest to," European Commission First Vice-President Frans Timmermans said. 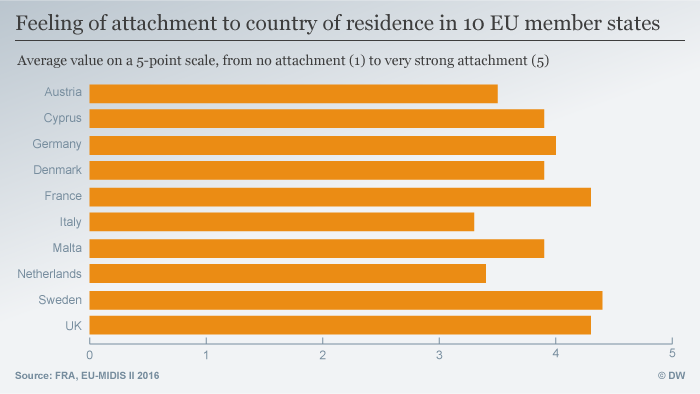 The study focuses on first- and second-generation immigrants – for example, people who were born in another country and moved to Germany and their children, who were born in Germany. The people surveyed have roots in many different regions around the world: North Africa, Sub-Saharan Africa, South Asia and Turkey.

The majority of survey participants reported they feel at home in the place where they live now. In Sweden, the average answer came up to almost 5, the highest score representing a very strong attachment. In Italy, Muslim immigrants were the least enthusiastic, reporting an average attachment to their home country of only 3.3.

Only around 2 percent of all participants reported not feeling attached at all. Second-generation immigrants report slightly higher levels of attachment – they feel at home in the country where they were born. 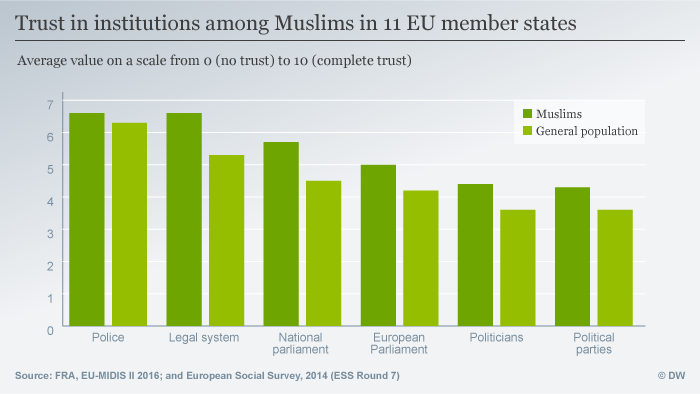 "Our survey results make a mockery of the claim that Muslims aren't integrated into our societies," FRA Director Michael O'Flaherty said. "On the contrary, we see a trust in democratic institutions that is higher than much of the general population."

The study's authors mention that Muslim immigrants' trust in institutions is influenced by the quality and performance of these institutions in their origin countries. They also state that trust "is an important indicator for integration."

Based on these results, the report's authors suggest measures like targeted outreach initiatives to reinforce the positive trust in police among the Muslim community. 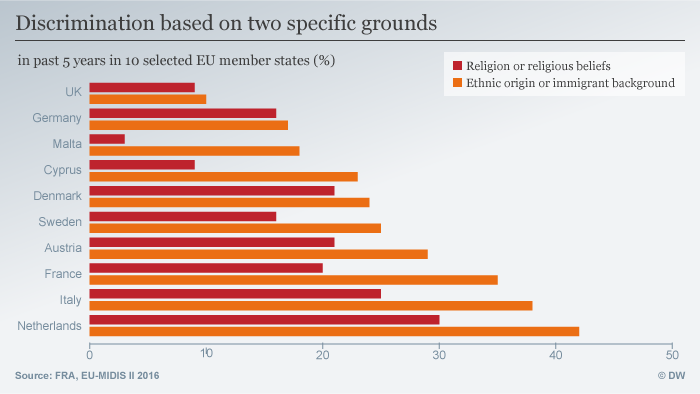 Almost 40 percent of Muslims surveyed for the FRA study said they had experienced discrimination in their daily life over the past five years. Areas where discrimination occurred include the job and apartment hunt, work and contact with teachers.

Numbers vary strongly from country to country, however. Differences are also apparent when it comes to what survey participants named as the reason for their discrimination.

"The Fundamental Rights Agency report shows that discrimination against Muslims is too widespread," European Commissioner for Justice, Consumers and Gender Equality Vera Jourova said. "It is now our duty … at the European, national and local level to make sure that anti-discrimination measures are respected."