Officials in Chemnitz said fake news items spread on social media fueled the riots. There are two suspects in custody and police are still looking for at least ten men who were seen making the illegal Nazi salute. 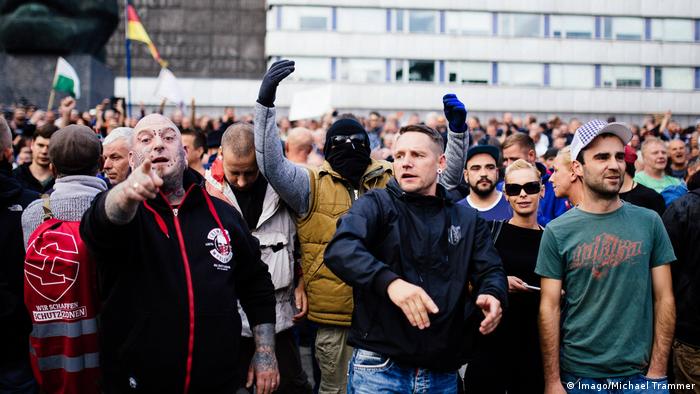 German officials have blamed "fake news" on social media for helping fuel right-wing violence in the eastern German city of Chemnitz over the past two days.

"We have to acknowledge that mobilization on the internet was stronger than in the past," said Michael Kretschmer, state premier of Saxony, where the violence took place.

The protests were sparked by the death of a 35-year-old German man in the early hours of Sunday, with an Iraqi-born and a Syrian-born man suspected in the killing. The subsequent right-wing protests were partially fueled by the false claim the victim had intervened to protect a woman. Also, internet users were exposed to fake reports that another man had been killed.

The claims had been disseminated mainly by right-wing groups and the organizer of the rally Pro Chemnitz on social media but were later declared by police to be false.

Kretschmer said the subsequent anger "was based on xenophobic comments, false information and conspiracy theories ... it was based on fake news."

The editor-in-chief of the Chemnitz daily Freie Presse, Torsten Kleditzsch, told DW that he and his colleagues tried to fight the fake news stories circulated online.

"In this case, we could not keep a lid on it," he said. "Even good journalism is tested to the limit when it attempts to correct a story that is already out there."

Kleditzsch also said fact-checking brings risks of its own. "When you are disputing a rumor with facts, you are also automatically broadcasting the rumor," he said. "At the end, it's not the denial that sticks, it's the rumor."

The role of the internet in the aftermath of the stabbing drew additional critical attention after the arrest warrant for the two suspects appeared online on Tuesday evening. Among other places, it appeared on the Facebook page of Lutz Bachmann, a founder of the far-right xenophobic PEGIDA movement, and was spread by Pro Chemnitz organizers. Authorities had issued the warrant for the suspects on Monday.

On Wednesday, Dresden's district attorney's said the digital copy of the arrest warrant appeared to be authentic and announced that it was investigating the leak of confidential information. Publishing an arrest warrant is a crime under German law.

Police said the 35-year-old man had been stabbed during an altercation between two groups of men, including the suspects. The two suspects have since been remanded in custody and are under investigation for manslaughter.

Saxon Interior Minister Roland Wöller said right-wing groups had colluded with members of football hooligan groups to mobilize people from across Germany to travel to Chemnitz for the anti-immigrant demonstration. 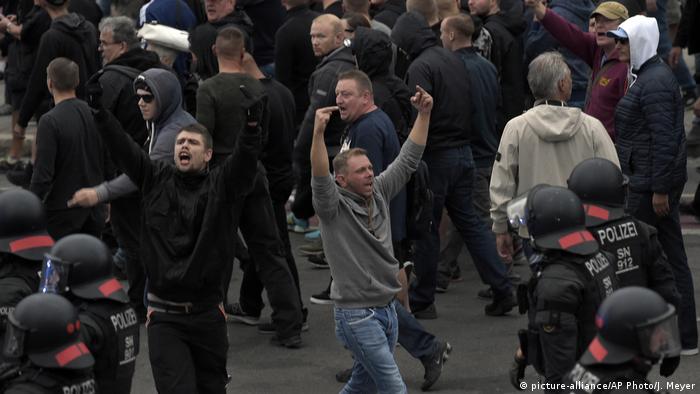 Right-wing protesters vastly outnumbered both the police and counter-protesters

Police in Saxony came under fire on Tuesday for failing to contain the rival protests. Late Monday, a police spokesman admitted that the police deployment to Chemnitz — which included 591 police officers — had not been large enough to separate the camps.

The head of the police union GdP, Oliver Malchow, told German newspaper Neue Osnabrücker Zeitung that police staff cuts in recent years were responsible for the lack of control over right-wing violence.

"The state has failed when it comes to domestic security because it massively reduced staff numbers," Malchow told the newspaper, adding that 20,000 new positions were required to remedy the situation.

Malchow pointed to a growing trend of vigilantism in Germany.

"When the state is perceived as no longer able to protect citizens, citizens take the law into their own hands and start to rely on self-defense militias and vigilantism," he said.

The protests on Sunday and Monday included attacks on foreigners by right-wing extremists. German Chancellor Angela Merkel denounced the violence as "mob-like."

German President Frank-Walter Steinmeier said the stabbing incident had been "abused to take xenophobia and violence onto the streets." He called for those responsible to be tracked down.

Josef Schuster, the president of the Central Council of Jews in Germany, said that a shocking number of people apparently felt no inhibitions on "hunting down certain groups and calling for vigilante justice."

Incidents of this kind had become so common in Saxony, "that we cannot speak of an isolated case," Schuster told the German press agency dpa.

Markus Frohnmaier of the anti-immigrant Alternative for Germany (AfD) drew criticism for a tweet apparently calling on people to take the law into their own hands.

"If the state is no longer able to protect its citizens, people go onto the street and protect themselves. It's quite simple," he said. "It's a citizen's duty today to stop death-dealing 'knife migration.' It could have been your father, son or brother," Frohnmaier added.

Prosecutors also said that 10 people were under investigation for giving the illegal Nazi salute during the street protests, based on police film taken during the Monday protests.

All symbols, images, slogans, uniforms, songs and salutes that glorify the 1933-45 Nazi regime are banned in Germany, including the extended right arm salute associated with the personality cult surrounding Adolf Hitler.