Recently elected CDU leader Annegret Kramp-Karrenbauer had congratulated Merz on joining an advisory committee on Thursday. A CDU spokeswoman says the rebuff does not represent an internal fissure. 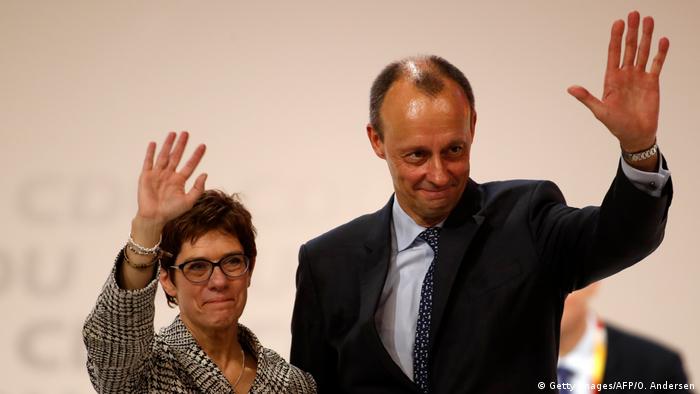 Christian Democratic Union (CDU) politician Friedrich Merz surprised his party on Friday by turning down a post he had been offered the day before.

CDU leader Annegret Kramp-Karrenbauer, who narrowly beat Merz in a December party leadership vote, had congratulated him on accepting the offer in a Tweet on Thursday.

"I am pleased that @_FriedrichMerz will contribute his experience and competencies to questions of economic and financial policy," she wrote.

Merz, a former rival of Chancellor Angela Merkel, had been offered a post on an advisory committee to help the party ahead of regional elections in three states this year.

But speaking to German television broadcaster n-tv, Merz said: "I am ready to help, but I won't be part of any commission or any committee of the party. Rather, I will help the party and the chairwoman on topics when they want my opinion."

Merz said he has offered his services to the party on the topics of business, economic, foreign and security policy. But he added that "no one needs to delegate tasks to me. That's not for me."

The 63-year-old said he would prefer to remain working in private business and on boards of directors, outside of the party's structures.

Known for being fiscally and socially conservative, Merz has been critical of the party's centrist posture under Merkel's leadership. Many of his supporters believe the drift caused voters to flock to the far-right party Alternative for Germany (AfD).

A CDU spokeswoman said that Merz and Kramp-Karrenbauer were "entirely in agreement" about the form of their future working relationship. "The advisory committee that he was supposed to join is not an official party committee. Therefore there is no dissent," she added.

Merz announced the move during the course of an economic summit in Bavaria at which he outlined his own thoughts on the future of Germany and Europe. He stressed the need for lowering the tax burden on German citizens; a new, more robust European stance toward China and the US; and investments in digital technology, especially in Germany.