AKK′s European vision: A conservative road map for Germany after Merkel | Germany | News and in-depth reporting from Berlin and beyond | DW | 11.03.2019

New CDU leader Annegret Kramp-Karrenbauer has laid out her European vision as Germany's post-Merkel era looms. Experts say the move could be just the spark the conservative party needs ahead of key regional elections. Annegret Kramp-Karrenbauer's unusual decision to publish her own European Union road map on Sunday paints a picture of a return to conservative policymaking for the Christian Democrats (CDU). Experts say that's all the more true as Germany's largest party faces the looming reality of life without Chancellor Angela Merkel.

"Like tectonic plates, we're seeing a clear political shift," Olaf Boehnke, a senior adviser in Berlin with Rasmussen Global, a Brussels-based think tank, told DW. "Everyone's preparing for what will happen once Merkel is actually history."

In Germany's Welt am Sonntag newspaper, the newly elected CDU Secretary-General Kramp-Karrenbauer, popularly known as AKK, called for bolstered security on the EU's external borders and shaping a version of Islam that is compatible with European values.

"Europe is faced with a choice," Kramp-Karrenbauer wrote. "Mine is clear: We must now make Europe right. We need strategic strength for our industry, technology and innovation, a sense of security for our European citizens and common foreign and security capabilities to defend our interests." 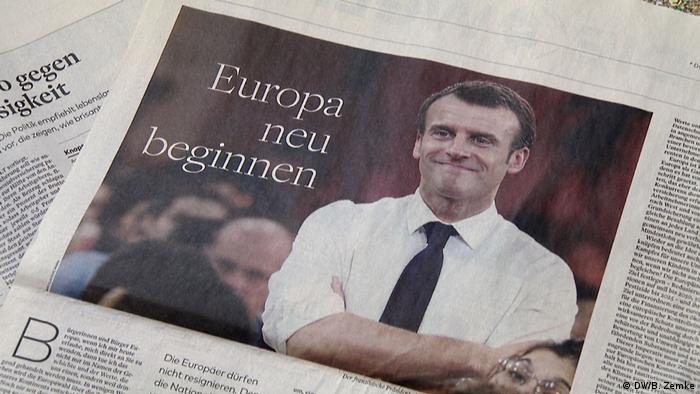 The move garnered swift criticism from politicians across the German left.

Kramp-Karrenbauer "is missing an opportunity" for greater cooperation with France at a time of political uncertainty in Europe, said Anton Hofreiter, co-leader of Germany's Green Party in the Bundestag. "Instead of filling the EU with new life, she's blocking it."

Meanwhile, Katarina Barley, German minister of justice and the SPD's top candidate for the coming European Parliament elections in May, deemed it "inappropriate" that such policy proposals would come from a party's secretary-general and not the chancellor herself.

Rank-and-file members of the SPD were already skeptical of Kramp-Karrenbauer overstepping her role. Following the CDU leader's controversial comments about gender-neutral bathrooms during Germany's Carnival festivities last week, they said they're prepared to break their already fragile coalition with the conservatives should she prematurely replace Merkel.

In an interview with broadcaster Welt.TV on Monday, Kramp-Karrenbauer dismissed her critics, and denied that her proposals presented a "riff" between Germany and France.

"That the CDU has different political views on the topic of redistribution, on the topic of uniform social standards ... than the French have, that is nothing new," Kramp-Karrenbauer said.

Her party cohorts, including Chancellor Merkel, backed such assertions. "The proposals are in line with the thoughts of the chancellor," government spokesperson Steffen Seibert said on Monday.

By and large, Kramp-Karrenbauer's proposals mirror historical ideological differences between Germany and France on the topic of Europe and actually lack substance on more pressing issues for the bloc, such as eurozone reform, Carsten Brzeski, chief economist at ING-DiBa, told DW. "The French always favor a more centralist approach, whereas the Germans prefer an intergovernmental approach. This clash is still there."

"But we have to understand that from a domestic point of view, this is merely a ploy to push AKK into the limelight and prepare her for taking over the reins," he added.

In presenting a clearly conservative approach to EU policy that addresses issues important to Germans such as security and migration — issues on which Merkel has drifted to the left during her 13-year tenure as chancellor — Kramp-Karrenbauer is charting out a future for her party that seeks to return it to its conservative roots, German political analyst Marcel Dirsus told DW.

"A lot of what she's talking about is symbolic," he said of Kramp-Karrenbauer. "People are critical of [Merkel] because she's taken the party to the left on migration."

With Kramp-Karrenbauer, stalwart CDU voters "see that the party is more responsive to their interests again," he added.

Such responsiveness could be seen Monday when particularly conservative members of the CDU, known as the "Wertunion," called for Merkel's immediate resignation to make way for Kramp-Karrenbauer.

­­"It would be in the best interest of the [conservatives] if Mrs. Merkel in an orderly manner and as soon as possible gave her office to AKK," the group's leader, Alexander Mitsch, told the Passauer Neue Presse newspaper. With the SPD potentially ending the current governing coalition after regional elections in eastern Germany later this year, "the CDU needs to prepare itself and should proactively take on a change in the Chancellery," he added.

Such a power play, however, is "not going to happen," Andrea Römmele, professor of politics and civil society at the Hertie School of Governance in Berlin, told DW. That is because of the difficult parliamentary procedure needed to trigger a vote of no confidence, and the fact that the Social Democrats stand to lose support in the event of snap elections, she explained.

The latest polls from Germany's Forsa Institute put support for the SPD at just 15 percent, compared to 31 percent for the CDU. And while Kramp-Karrenbauer would likely beat any possible SPD challenger in a head-to-head race for chancellor, Merkel remains popular: Sixty-seven percent of voters across all political parties believe she should stay in power, a 12 percent increase from last month, according to the poll.

Instead, Kramp-Karrenbauer's testing of her new power is a signal to voters that she's ready to take the party in a more conservative direction — a move that could pay off in upcoming elections in eastern Germany for both the SPD and the CDU, said Dirsus.

"The eastern German elections are very scary," he said. "But this polarization is good for the Social Democrats, because they have someone who they can fight with again … and it's good for the CDU because a lot of people who are dissatisfied with Merkel can get on board with AKK."

While defending a controversial remark about the real use of gender-neutral bathrooms, the head of the CDU decried the "madness" of cultural sensitivity in kindergarten Carnival parties. (06.03.2019)