Opinion: Emmanuel Macron takes the EU bull by the horns

In a slow European Union election campaign, France's president has taken the initiative by calling for sweeping reforms to the bloc. A fresh burst of energy is just what the EU needs, writes DW's Bernd Riegert. 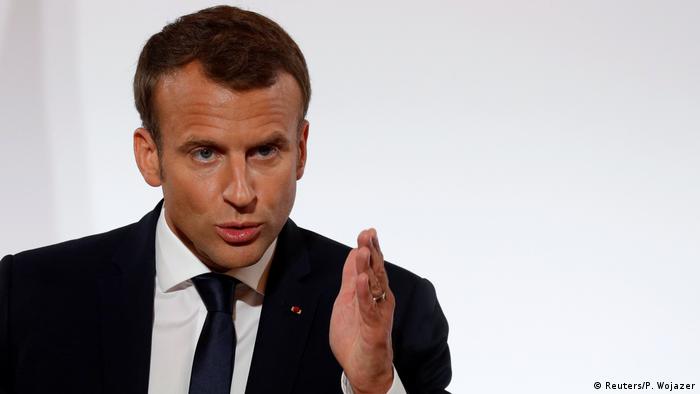 It's a smart communications move. French President Emmanuel Macron has called for the revival of Europe in a column published simultaneously in leading newspapers in every European Union country. In doing so, he has set the EU political agenda for the next few days. Macron's visions are on everyone's lips — at least among Europeans who still read daily newspapers. Whether he will reach the "angry" citizens wearing yellow vests in France and waving Brexit flags in Britain is questionable, however.

But at least he's making an offer and setting out some ambitious goals, while other politicians in Europe prefer to keep quiet, such as German Chancellor Angela Merkel, or preach dull nationalism, such as Hungarian Prime Minister Viktor Orban or Italian Interior Minister Matteo Salvini. Against the backdrop of Brexit chaos, Macron is offering a counterproposal, a "European Renaissance" for what he sees as a threatened continent.

Some of the proposals are well-known, such as joint protection for the EU's external borders. Others are radical, such as orienting all EU policies towards the fight against climate change. Macron is calling for a whole series of new institutions right now: From a rather unrealistic agency to protect democracy to a climate investment bank that might have a chance of being implemented.

Only 18 months ago, Macron delivered a keynote speech outlining a series of major EU reform demands, of which only a select few — the eurozone budget, for example — will be implemented (with restraint) in the foreseeable future.

Macron sees himself as an EU pioneer who is willing to rock the boat. His partner in guiding in the bloc, German Chancellor Merkel, is the prudent realist who whittles down grand visions into feasible policy.

Macron, under political pressure domestically, no longer wants to wait for Merkel. He intends to push forward and she will follow hesitantly. The two may have just praised a joint approach to European politics with the new Treaty of Aachen signed in January, but practical politics still looks different.

Macron's demand to protect European companies from American and Chinese competition is a reaction to protectionism and emerging trade wars. With his demand to close the Schengen area borders for migrants and create a restrictive right of asylum within the EU, he is reacting to what many Europeans feel is a need for greater protection, but it also gives impetus to right-wing populists and nationalists.

However, he also wants a common policy on asylum acceptance across EU states, something likely to spark outrage from the French president's "favorite enemies" in Hungary and Italy.

A debate at last

Macron's letter to the Europeans, which comes three weeks before a possible Brexit and 12 weeks before the European Parliament elections, is of course not just the prelude to an election campaign. He also wants to mobilize pro-EU momentum and shape the European Parliament for the future. It is high time that someone began a serious election campaign. Up to now, the conflict between populists and liberals has been a tired one. Now there could be momentum in the debate.

Macron's reform proposals should lead to a "European Conference" by the end of the year. He is not ruling out an amendment to EU treaties. That is daring, because in France itself the people would have to vote on fundamental changes. Driven by the protesting yellow vests and low approval ratings, Macron has taken action now. And Europe could benefit from that.

Florida, Carolinas count the cost of Hurricane Ian 1h ago