French yellow vests and green activists are coming together in a spirit of revolt ahead of EU elections this spring. 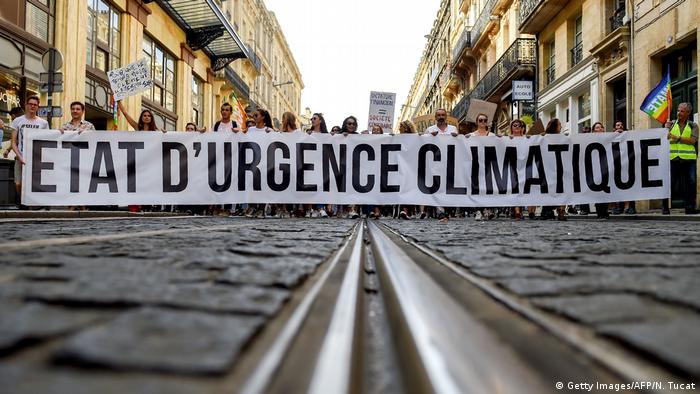 When the gilet jaunes — or yellow vest — protests erupted in France late last year, President Donald Trump, the only world leader topull out of the Paris Agreement, was quick to chalk them up as a defeat for climate protection in Europe, saying "the protestors in Paris agreed with the conclusion I reached two years ago."

But in the Paris suburb of Montreuil, where a group of yellow vests are handing out coffee and cookies to passersby on weekday afternoons, there are signs that two apparently disparate movements — yellow and green — might be closer than Trump assumed.

"It seems to me climate is even more in danger than French democracy," Monique Pedron, a yellowed-vested pensioner who regularly attends climate rallies, told DW.

There's certainly a spirit of revolt in France these days. The yellow vest demonstrations, now in their third month, have focused on economic grievances, and called for ordinary people to have a greater say in the democratic process. 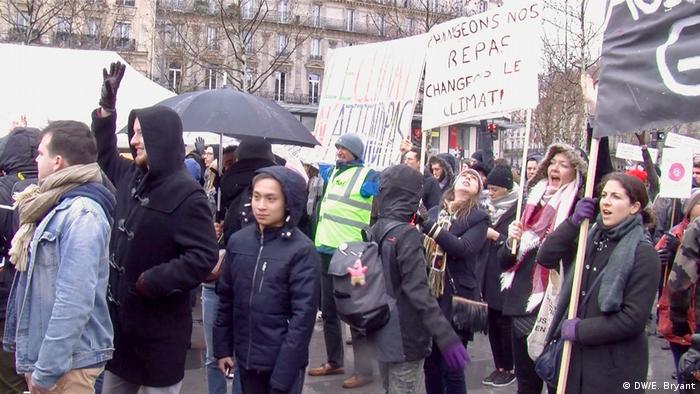 But growing alarm over climate change, and the sense that politicians aren't doing enough to prevent it, is also bringing citizens out onto the streets.

"I think the fight against climate change in France is similar to demands by yellow vest protesters — for the government to take the population's decisions into account," school teacher and vetern yellow vest Francois Gilles told DW.

On a recent, rainy Sunday afternoon, Gilles' fluorescent yellow jacket was one of many visible at climate demonstrations at Paris' iconic Place de la Republic. Over the last few months, thousands have joined such  protests.

"I don't think enough is being done, and people really, really need to wake up," another Paris protester, Veronique Weil, told DW. "The seas are rising, countries are going to disappear — it's crazy to me."

French climate protestors like Gilles and Weil are part of a wider grassroots movement across Europe that has seen school children on strike and activists occupying government buildings.

"You have many young generations today mobilized, saying they are the last generation to be able to save our future, to save our planet," Neil Makaroff, EU policy advisor at Climate Action Network France, told DW. "Today, climate is one of the main concerns."

And, according to Manuel Lafont Repnouil, head of the Paris office of the European Council on Foreign Relations, it's a concern French President Emmanuel Macron will be acutely aware of ahead of European Parliament elections in May.

"Macron's team has looked at recent elections throughout Europe and has seen that in most cases, the green party, the pro-environment forces have scored a big success — or could have big successes in the next European elections," Lafont Rapnouil told DW.

Since his election nearly two years ago, the French leader has coasted on his green credentials. He promised to "make our planet great again," inviting American climate scientists to France after Washington announced it was pulling out of the Paris deal.

Yet Macron's popular environment minister, Nicolas Hulot, quit the government last summer, frustrated over climate inaction. And he's not the only one to see a gap between Macron's rhetoric and policy. 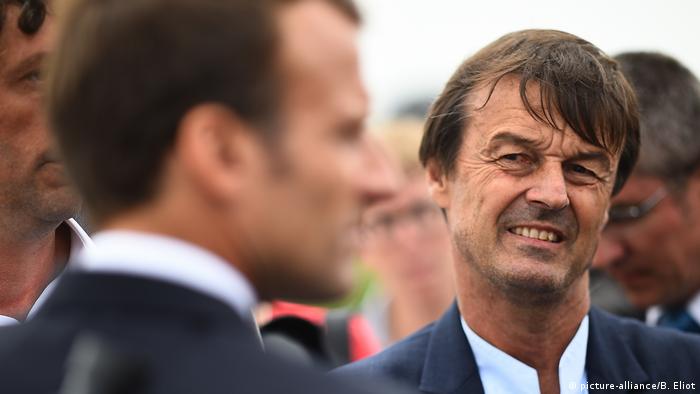 "They want France to be one of the climate leaders, but they actually don't do anything inside the territory," Marie Toussaint, founder of environmental group Notre Affaire a Tous said of the French government. "What we see is, we're late on all our climate commitments.

Towards the end of last year, Toussaint co-sponsored an online petition threatening to sue the French government for not doing enough to fight climate change. So far, it has gathered a record 2 million signatures. A similar petition in the Netherlands forced the Dutch government to deepen emissions cuts.

But what of the cost to ordinary French citizens — the truck drivers and farmers, for instance, who took to the streets in yellow insisting they couldn't afford to pay more for carbon-heavy diesel?

People are willing to bankroll the fight against climate change, Toussaint argues, but bigger, richer polluters must pay their fair share. Ordinary drivers and commuters shouldn't bear the brunt of transforming a whole energy system.

"Fuel is already overtaxed and the increase was absolutely not going to pay for climate," protestor Pedron says. "That was money for the government's pockets, and only a bit for climate."

With tax cuts for the wealthy, and as Hulot puts it, having relegated environmental issues "to the bottom of the list of priorities," Macron has alienated both anti-poverty and environmental activists.

"Climate justice and social justice go hand in hand," one speaker declared to a cheering crowd.

Greens vs. the far right

But the yellow vest movement is extremely diverse, and not everyone sees that correlation. Some members embrace far-right populism, which has been gaining ground across Europe, and which often goes hand in hand with climate skepticism.

"They're saying climate isn't really an issue," Makaroff says, adding that they don't see it as a European problem.

"For political parties," Makaroff says, "it would be suicide not to take up climate issues in the public debate for the European elections."

NASA scientist Peter Kalmus says small changes can make a big difference when it comes to protecting the environment. He's even written a book to inspire others. (31.01.2019)