The research grant winners were announced ahead of a "One Planet" summit in Paris to encourage investment to counter global warming. Germany's environment minister called on the world's finance sector to do more. 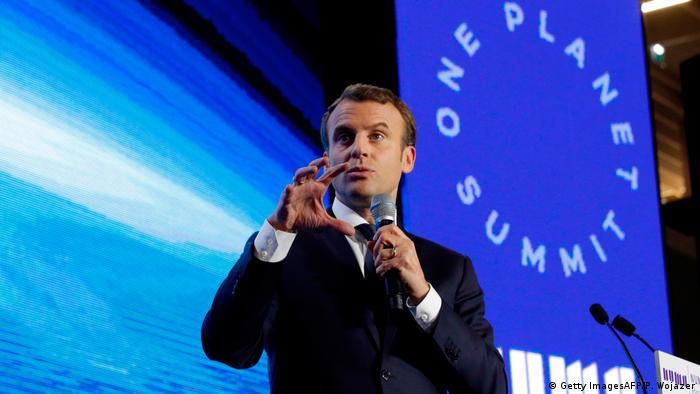 Macron unveiled the "Make Our Planet Great Again" climate research grants after President Donald Trump withdrew the United States from the landmark Paris climate accord in June. The French president said that Trump's decision to pull out was a "deep wake-up call for the private sector" to take action.

— The world at 3 degrees: What it means for five cities

At first, the multimillion-euro grant program was targeted at American scientists. It was later opened up to other non-French researchers.

Thirteen of the 18 multi-year award recipients are American scientists, who will now conduct research in France for between three to five years.

The projects are set to be announced at Tuesday's One Planet Summit, which will bring together some 50 world leaders, businesses and investors to commit to financing climate change solutions. Among the leaders set to attend are UN chief Antonio Guterres, World Bank President Jim Yong Kim, Mexico's Enrique Pena Nieto, Britain's Theresa May, Spain's Mariano Rajoy and European Commission President Jean-Claude Juncker.

'We can do things differently'

Macron announced the award recipients at a startup incubator in Paris.

"What you are showing here this evening, with your commitment, with the projects that have been chosen ... is that we do not want climate change, and we can produce, create jobs, do things differently if we decide to," Macron told the winners.

Berlin calls on finance sector to do more

"It's about directing all investments worldwide towards climate-friendly options," Hendricks said. "Large, listed companies must lead the way."

The minister called on investors to take responsibility and analyze climate risks in their portfolios. "Unlike traditional climate negotiations it won't be countries that are in focus, it will be business and banks," said Hendricks.

The Paris climate accord would be developed she said: "Its implementation is unstoppable," Hendricks continued, "despite the US decision to withdraw."

Committed despite US withdrawal

On the eve of the Tuesday's summit, Macron directed some strong remarks at US President Donald Trump over his decision to withdraw from the Paris climate accord. The US is the only country to reject the pact.

In an interview aired with US broadcaster NBC, Macron said he wanted to remind Trump of his responsibility to history over his decision to pull out of the agreement. "I'm sorry to say that, it doesn't fly, so, so sorry but I think it is a big responsibility in front of the history, and I'm pretty sure that my friend President Trump will change his mind in the coming months or years, I do hope," said the French president.

Macron added: "It's extremely aggressive to decide on its own just to leave, and no way to push the others to renegotiate because one decided to leave the floor."

Trump, who has dismissed climate change as a "hoax," has requested that Congress free up funds by slashing billions from federal agencies' climate research budgets.

Former US President Barack Obama has spoken of his frustration that America is pulling out of the 2015 climate accord. In a speech in France, he stressed that US businesses, states and cities remain firmly committed. (03.12.2017)

Energy production, food, mobility, waste: Four videos highlight German innovation in these key areas - projects that, each in their own way, protect the climate. Say hello to Germany's climate innovators. (22.11.2017)

France and Germany's leaders opened the high-level talks at COP23 on Wednesday, calling on other countries to match Europe's climate goals. But with Germany heavily reliant on coal, how ambitious is Europe really? (15.11.2017)