France and Germany's leaders opened the high-level talks at COP23 on Wednesday, calling on other countries to match Europe's climate goals. But with Germany heavily reliant on coal, how ambitious is Europe really? 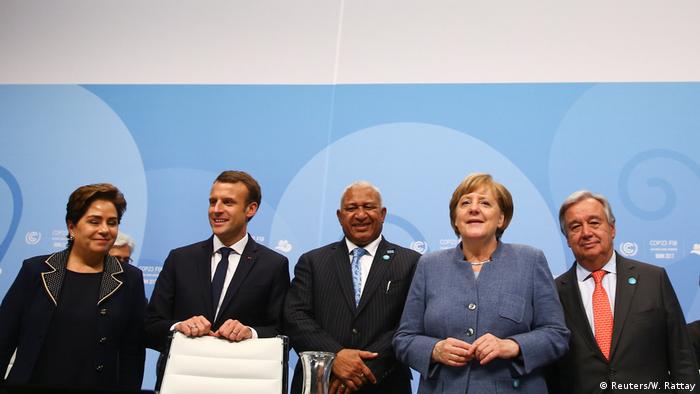 The European Union came in for high praise from the leaders of France and Germany at the UN climate summit in Bonn on Wednesday, as delegates entered the last stretch of the two-week conference.

German Chancellor Angela Merkel opened her address by noting that EU legislators had agreed last week to reform the Emissions Trading System, the market mechanism that is the bloc’s main tool for reducing emissions. A glut of free allowances has driven down the price of carbon, which has in turn not motivated companies to reduce their emissions.

"The certificates are going to be taken out of this scheme in order to be able to develop it into a meaningful instrument," she said, acknowledging that the system has not worked as intended to date.

Her message was clear: Europe's efforts to date may not always have worked, but it is still on the most ambitious road, and other countries should follow the European lead.

French President Emmanuel Macron told the delegates that not only is Europe leading the way in efforts to fight climate change, it can also make up for the impending withdrawal of the United States from the Paris Agreement.

"I propose that Europe replaces America," he said. "And France will meet that challenge."

"We know we have a responsibility here - we still use a lot of coal, particularly lignite," she said. "Even within a wealthy country like Germany there are conflicts need to be solved in a calm and reliable manner."

The German power sector is currently around 45 percent reliant on coal, largely because of the decision to phase out nuclear power in the wake of the 2011 Fukushima disaster. The country is now far off track for meeting its 2020 emissions reduction targets.

The situation is epitomized by the Hambach open-pit coal mine just outside Bonn. It is Europe's most carbon-emitting spot.

Despite her acknowledgement of Germany's coal addiction, environmental NGOs criticized the chancellor for not offering solutions. "The chancellor’s climate leadership credibility was already hanging in the balance, and continues to do so," said Jennifer Morgan from Greenpeace. "She talked of trust and reliability, but where is her reliability?"

Merkel is currently in talks with the Liberals and the Greens to form a governing coalition, and the issue of phasing out coal has become a heated topic. The Greens initially called for a phase-out by 2021, in line with the commitment made by Macron in France.

But this is much more difficult to do in Germany than in France, which gets 75 percent of its power from nuclear energy. So the Greens have backed off this demand and are now calling for a slower phase-out.

An agreement that a coalition can in fact be formed needs to be reached by Friday, which coincidentally is also the last day of the summit.

"What exactly we need to do is something we need to discuss in very concrete terms in the days to come," Merkel said. 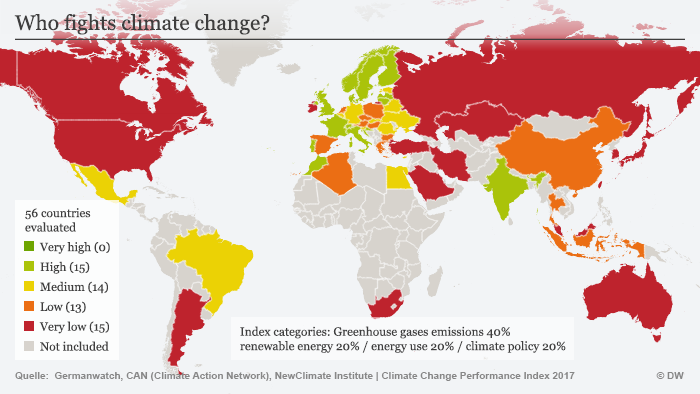 Big talk, not enough action from the EU

Germany will almost certainly miss its 2020 goals. But the good news for Germans is that they will be "bailed out" by their cleaner neighbors to the south. The European Union as a whole will meet its 2020 targets under the Kyoto Protocol, and that's all that matters.

But when it comes to the EU’s 2030 targets under the Paris Agreement, the situation is more complicated. According to this year’s Climate Change Performance Index (CCPI) released on Wednesday, the EU won't be able to reach its goal of reducing emissions by at least 40% below 1990 levels by 2030 with the policies currently in place.

Wendel Trio, director of Climate Action Network Europe, one of the organizations that publishes the CCPI, says that the ambitious language used by Merkel and Macron on the international stage is not yet being matched by action.

"The report reveals that the EU vows commitment to the Paris Agreement, but avoids real climate action at home," he said "The EU needs to translate words into action and commit to deeper emission cuts than currently foreseen." 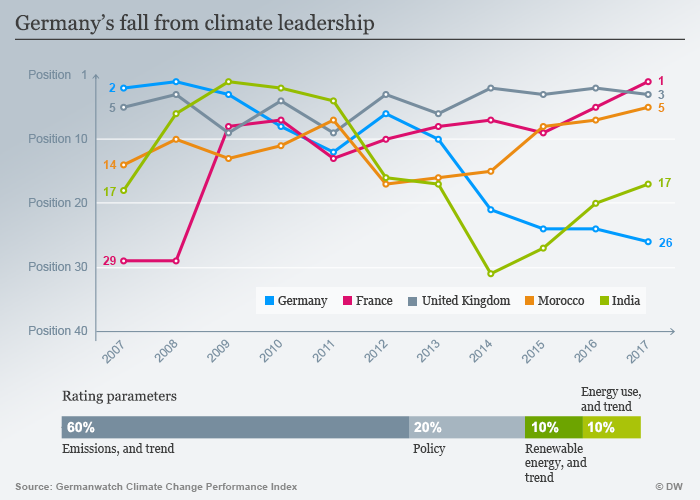 But Miguel Arias Cañete, the EU's climate and energy chief, said in Bonn on Wednesday that EU proposals currently in the legislative process, including the emissions trading reform, are enough to get the EU to its target.

"European countries are highly mobilized on climate action," he said. "We are probably the only party of the Paris Agreement that has the most ambitious targets, and also all the needed legislation already in the legislative process."

National governments need to do their part

He added that the legislation currently on the books was prepared to reach the 2020 goals, and that this will happen. If the European Parliament increases the ambition of the proposals in the legislative process, the EU will be able to exceed the 40 percent emissions reduction target, according to the energy chief. 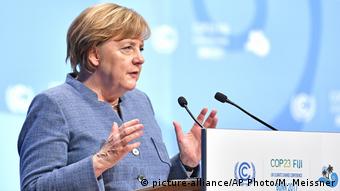 Cañete added, however, that the European Parliament cannot increase its ambition alone — there must be strong support from the 28 national governments. For that, a climate summit hosted by Macron on December 12, with the leaders of all Paris Agreement countries except the United States, will be essential, Cañete believes.

"The summit is important for confirming the Commission's ambition for important climate policy," he said. "For sure, the [EU] leaders can make further announcements. But we have put all the bricks down to build, and European Parliament is putting them together."

Climate finance: Footing the bill for a global crisis

Climate finance is among the most contentious issues at COP23. Richer countries have agreed to help the poor survive global warming and develop greener economies. But how does that work — and are they paying up? (15.11.2017)