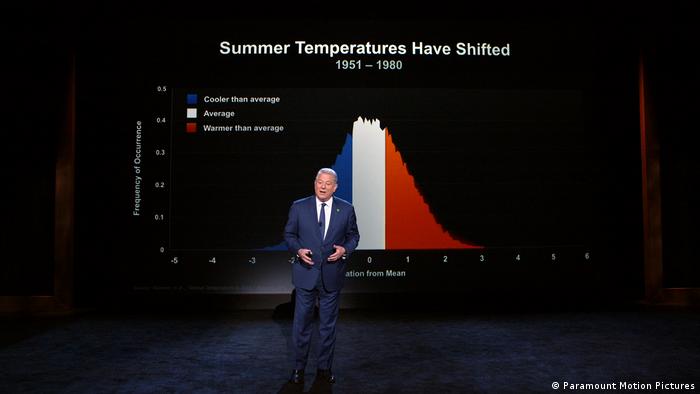 The first half of former US vice president and one-time presidential hopeful Al Gore's new climate documentary views like a disaster reel from a dystopian movie about a world in the grips of some future climate disaster.

"Rain bombs" lashing cities around the world, biblical flooding in Miami and Manhattan, huge storm surges and 315 kilometer per hour (195 mph) winds ripping through streets in the Philippine city of Tacloban and devastating everything in their wake, collapsing glaciers in Antarctica and raging wildfires in Europe and Canada.

While Gore's 2006 documentary, the Oscar-winning "An Inconvenient Truth," was full of predictions and dire warnings of this sort, the new movie shows exactly what has been happening around the world since then.

"Every night on the news is like a nature hike through the Book of Revelations," Gore quips in "An Inconvenient Sequel: Truth to Power." That the world has not completely woken up to the perils of climate change, he counts as a personal failure. He's been banging the global warming warning drum for about 40 years.

Yet, Al Gore is not a pessimist.

Even in the face of Donald Trump winning the US presidency and pulling out of the Paris Climate Agreement, as well as warnings that we only have a slim chance of limiting global warming to 2 degrees Celsius (3.6 degrees Fahrenheit), he believes there's reason to remain resolutely optimistic.

"We are making great progress," Gore told reporters at a press conference in Berlin to promote his documentary. "But we are not yet solving it quickly enough. My hopefulness, my optimism is based on the assumption that the encouraging movement we have seen in recent years will continue." 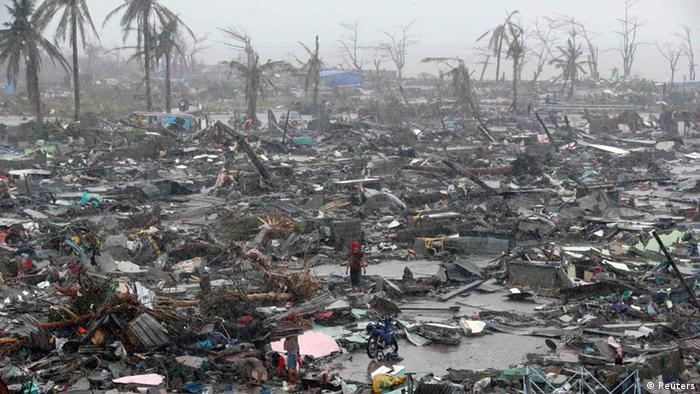 The Philippine City of Tacloban was devastated by Super Typhoon Haiyan

An Inconvenient Sequel's second half is dedicated to the progress made since 2006 - almost as a kind of antidote to the disaster reel of the first part.

In it, we go behind the scenes at the 2015 Paris Climate Conference, where - after years of disagreement - world leaders finally made a solid pledge to lower greenhouse gas emissions. We see Gore behind the scenes brokering a deal with holdout India, which believed the deal was unfair to developing nations.

We check in with Gore as he gives rallying speeches and informational slideshows as part of his Climate Leadership Training Project, which has trained thousands of activists in spreading awareness of climate change and implementing solutions at a local level.

During those slideshows, he cites examples of green energy successes in Chile, where solar energy production has increased six-fold since 2014, and Scotland, which has been seeing record wind power output.

Gore also visits Georgetown, the "most Republican city in the red state of Texas, in the heart of oil country," where Republican Mayor Dale Ross made a calculation and realized his constituents would benefit from much cheaper energy, if they switched to renewables. Now the city is on course to be 100 percent renewable from 2018. 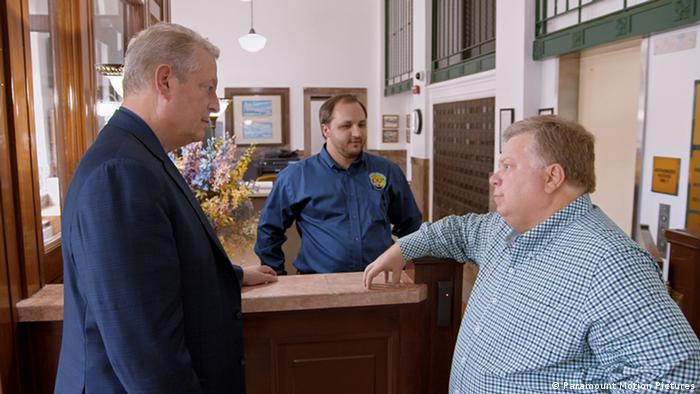 Economics arguments are part of the move toward what Gore calls the "global sustainability revolution" as well as an increasing openness to green energy even in hardcore red states, like Texas, which has become a leader in solar and wind in the US.

Even these oil-rich states believe fossil fuels belong to the past, said Gore, adding that Trump's promises to return the coal mining sector to its former glory are totally "unrealistic."

The majority of jobs were lost due to mechanization of coal mining and the introduction of low cost natural gas dealt another blow, said the Nobel Peace Prize winner. Instead, the job growth is in the green energy sector - and technological advancements are helping to drive this growth.

"In the US today, solar jobs are growing 17 times faster than all other jobs in the economy," said the former senator from Tennessee, donning his trademark cowboy boots at the press conference. "The global sustainability revolution has the magnitude of the industrial revolution but the speed of the digital revolution."

The election of Donald Trump, his appointment of climate change skeptics and fossil fuel industry players  to top environmental and energy positions and his ultimate withdrawal from the Paris Accord, has proved an unforeseen bump in the road away from fossil fuels. 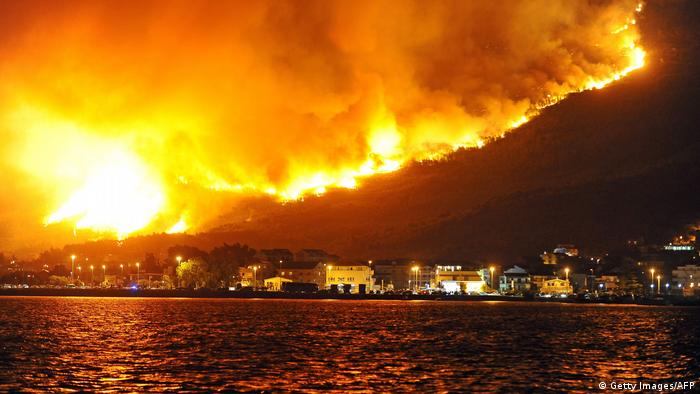 Forest fires raging across Croatia, some reached the suburbs of the coastal city of Split

Seen in the film after hearing the news, Gore quotes boxer Mike Tyson. "Everyone has a plan until they get punched in the face."

At the press conference in Berlin, Gore said Trump remained a "threat" in the fight against climate change. The fossil fuel sector has major influence in US politics, something which Gore says needs to be curtailed and counteracted, as does the well-documented campaign of misinformation and pseudoscientific studies backed by major industry players.

A battle between right and wrong

Still, Trump's actions have galvanized the climate movement, said Gore, quoting Newton's third law of motion that "for every action there is an equal and opposite reaction."

"The reaction to Donald Trump is very strong," said Gore. "There is an upsurge in progressive activism and climate activism that is really unprecedented, since his speech withdrawing the US from the Paris Agreement … On that day, the entire rest of the world, redoubled its commitments to the Paris Agreement."

In the US, 12 federal states and Puerto Rico have committed to reducing CO2 emissions under the US Climate Alliance. Another 10 states have said they will keep to the terms of the Paris Agreement, while hundreds of cities have signed up to the Mayors National Climate Action Agenda, which commits them to lowering emissions locally. 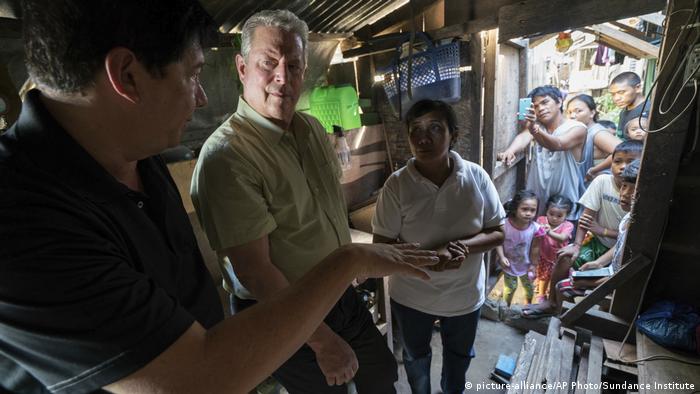 Since losing the US presidency to George Bush Jr, Al Gore has devoted himself to activism on climate change

For Gore, the climate movement has finally reached a point at which the moral arguments over its rightness can no longer be denied or ignored.

"All of these revolutions have faced fierce resistance," said Gore, speaking of social and political revolutions from the abolition of slavery to the civil rights movement. "But when it became clear to people that underneath all of the false arguments was a simple choice between what is right and what is wrong, then the outcome become foreordained."

"That is the tipping point the climate movement is approaching right now," said Gore. The question remains for some, whether that point can be reached quickly enough.

Coal and oil groups "undermine" UN climate negotiations, says Corporate Accountability International. A group of developing countries is calling for big polluters' lobbyists to be kicked out of upcoming talks in Bonn. (02.05.2017)

Politics aside, it's all about climate

With Trump ditching climate action, mayors across the US are stepping up. Steve Benjamin, co-chair of the Mayors for 100% Clean Energy campaign, told DW how going green is good for people, the planet - and the economy. (19.07.2017)