More than three months after super-typhoon "Haiyan" hit Tacloban, life is slowly returning to the ravaged Philippine city. But many residents are still in desperate need of shelter and jobs. 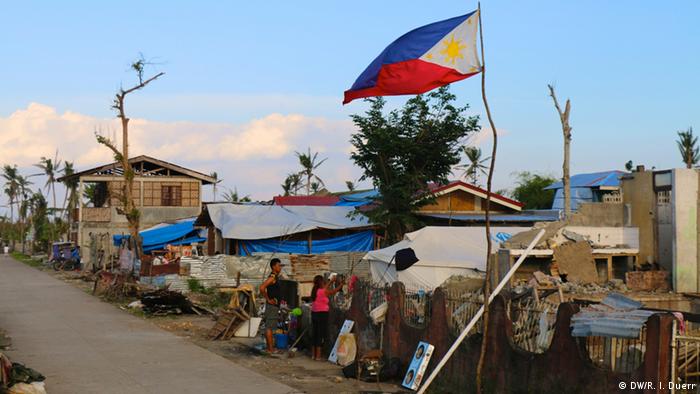 You might get an eerie feeling walking on the streets of Tacloban in the southern Philippines at night. The few operating shops and eateries in the city usually shut down before sunset, as electricity has only been restored to about twenty percent of the city. Jacques Palami is one of the lucky residents to own a generator that keeps his nightly business running.

The 26-year-old and his brother used to own a well-known sports-bar, but the business was completely destroyed by the typhoon, which is named Yolanda in the Philippines. In a bid to "give some life back to the city," Jacques decided to refurbish an old truck and turn it into a mobile bar.

Named after his grandfather "Na Ning," the bar has quickly become a popular evening spot for locals and international aid workers alike. "The new place is more than a bar, it's a place where people can de-stress and find a hint of normalcy again."

As streets are cleared from debris, Tacloban appears to be slowly coming back to life. Traffic jams are back, small grocery stores and stalls at the public market are reopening, and T-shirts labeled "Typhoon Survivor" or "Tindog Tacloban," which means rise Tacloban in English, are being sold everywhere. 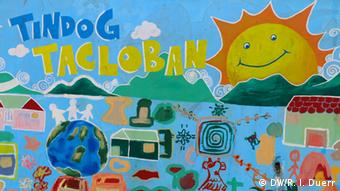 Emmanuel: "I know that sooner or later we will rise again"

"I know that sooner or later we will rise again because our hearts are stronger than any calamities," says Emmanuel Firmo with tears in his eyes. The young man works as a physics teacher in a high school in San Jose, a district on the outskirts of Tacloban.

His school was almost completely devastated; books and technical equipment were washed away in the storm. Only half of the students returned to school in early January. "Many of the students are simply not in a state of mind to study right now, they are still traumatized" says the teacher.

'Where can we build our homes?'

The majority of the residents in San Jose, like in most other areas in the region, are living among piles of debris and dust, in tents or makeshift homes made out of tarpaulin and iron sheets. Exposed to the changing weather conditions and without any income of their own, they rely solely on relief goods and donations.

In Anibong, a coastal village just outside of Tacloban, the situation is even more dramatic. Here, the houses were not only obliterated by wind and water, but also by nine cargo ships being driven inland when the storm surge crashed ashore. They all remain stranded in the middle of the village.

Every other day, bodies are found under the huge vessels. Evangeline Acosta, a mother of three children, recounts her experience: "Our two-story house was made of concrete. After a ship ran into it a total of three times, it broke into pieces. My husband carried the kids and my 92-year-old father to the top of a hill." 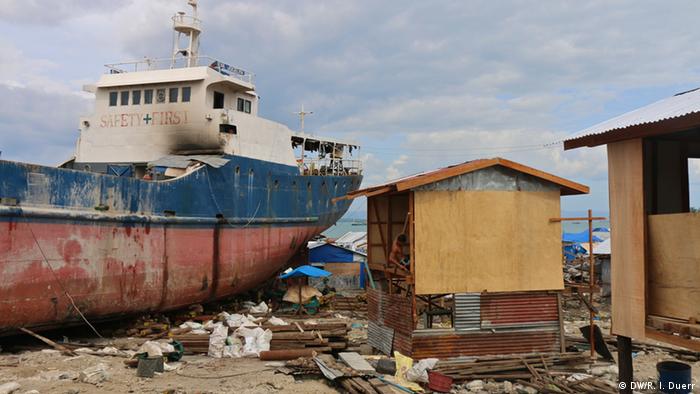 The whole family only survived because they managed to hold on to palm trees. Evangeline's husband Ronaldo used to be a carpenter. Now he wants to build a hut out of coco lumber where their old house once stood, thus potentially violating a recent city-council ordinance prohibiting residents to rebuild their homes within forty meters of the coastline.

Ronaldo feels desperate: "Where else can we build our homes? We cannot simply move away from here. We've been waiting for help for three months now - in vain. We need to help ourselves now."

According to Shelter Cluster, the organization in charge of coordinating shelters, about 1.1 million houses have been either destroyed or damaged in the Tacloban area, leading to about four million people being displaced.

People living in the typhoon-ravaged areas of the Philippines have slowly started to return to normal life, with relief efforts focused on reconstruction. (08.01.2014)

Although relocation plans are being discussed by local governments, the issue of land rights remains a major problem, says Carlos Padolino from the local NGO "Citizens' Disaster Response."

"Most landowners in the Philippines are either politicians, lawmakers or big business groups in partnership with international corporations. This leaves the majority of the Filipino people effectively landless," he says.

Hence, if the government intends to relocate people, it has to negotiate every piece of land with the respective landowners. "If people are to be resettled, there also need to be job opportunities in the new relocation areas. Otherwise, they will go back to where they came from," says Padolino.

Especially in rural areas, where the local economy mostly depends on fishing, rice or coconut-farming, long-term recovery will be arduous. For instance, some 33 million coconut trees were damaged or destroyed in the storm. In addition, most fishermen in the region are currently left jobless, as their boats and nets were destroyed or flushed away during the storm surge.

Lesley Wright, spokeswoman for the United Nations Development Program (UNDP) in Tacloban, is more positive about the development in urban areas: "Once the power problems are sorted out, people in the cities will be able to return to their jobs." 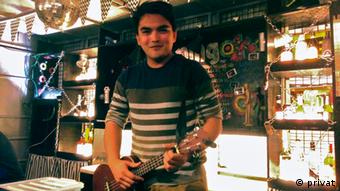 Palami wants to bring back life to the city of Tacloban.

Jacques Palami is proud that his truck-bar business has already enabled him to employ four people. "I wish that more people at my age start setting up things, whatever they are good at, because we are the future of Tacloban. I'm aware that this city will never be the same, but a different Tacloban isn't necessarily bad.

"I think there is a certain beauty in starting over. I just hope that people make the best out of this situation and don't go back to their old ways – so that this transition will eventually be a good change for us," he added.