People living in the typhoon-ravaged areas of the Philippines have slowly started to return to normal life, with relief efforts focused on reconstruction. 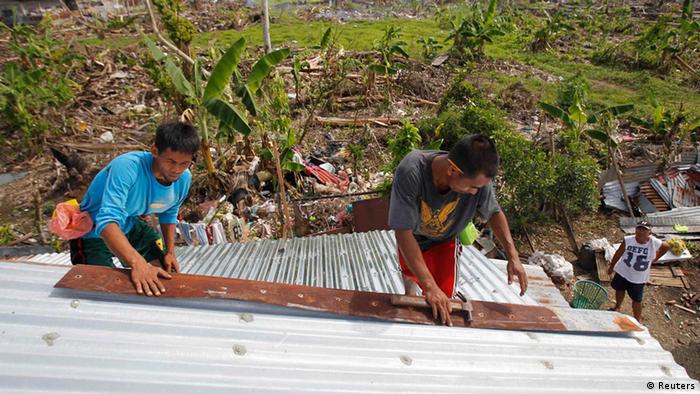 Provisional classrooms have been set up under tents with tables donated from aid organizations. It is a sign of hope, even if the schools in Tacloban, which were devastated by Typhoon Haiyan, are only opening this week.

"The German Red Cross has helped set up 56 classrooms," said Jörg Fischer, who is responsible for coordinating the organization's efforts in the area.

He told DW that people were hopeful two months after one of the worst natural disasters ever recorded, which is referred to as Typhoon Yolanda in the Philippines.

"A lot has been done; signs of progress are showing. When I was in Tacloban on November 11, corpses were lying around the streets and the smell of decay was heavy in the air." Now, he said, the bodies have been buried and the streets have been cleared of debris. While the technical reconstruction has not yet taken place, people have begun to live their lives again, Fischer explained. 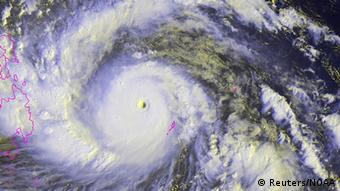 Haiyan, aka Yolanda, was one of the largest storms ever recorded

The newly-opened schools, however, still have a number of vacancies. "Only around half of our 1,000 students have returned," explained Maria Evelyn Encina, headmaster of a school in San Roque, near Tacloban. She has heard nothing from the others since the typhoon. "They might be in shelters or with relatives." Or they could be among the nearly 2,000 people who are still officially missing.

From disaster relief to reconstruction

The storm swept across the Philippines on November 8 last year, killing over 6,000 people and displacing four million more. The survivors are still in desperate need of shelters, according to the UN Disaster Coordination Team, which this week called out on its website for donations.

While a number of organizations, for example, the Arbeiter Samariter Bund have ended their relief efforts in the area, and are now coordinating their work from Germany, others, such as the German Red Cross, the Malteser International and CARE International, have stayed. The German Red Cross has been in the country for five years and CARE for over six decades. 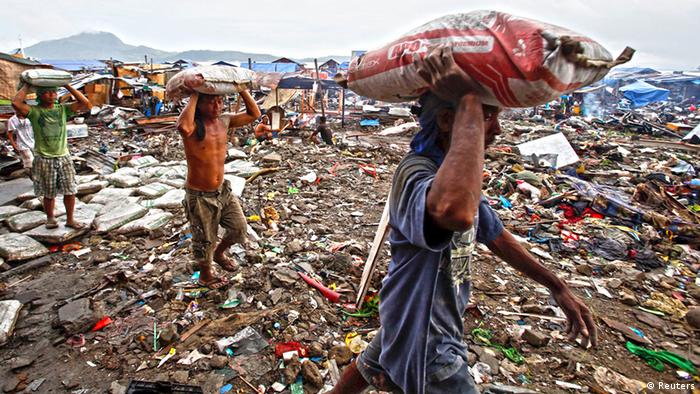 While relief efforts concentrated on basics, such as supplying affected people with potable water, food, mosquito nets and hygiene products, helpers can now concentrate on other areas. "The reconstruction phase has begun and now it is about building houses that are more resilient to typhoons," Fischer said.

The reconstruction of a city like Tacloban with a population of 200,000 will take two to three years, according to Fischer. Sandra Bulling of the CARE foundation agreed. Shortly after the disaster, she was on the island of Leyte to hand out food rations. Each person received 20 kilograms of rice, along with canned fish dried fish, oil and beans.

"A few weeks ago, we started handing out construction materials and tools - mainly tarpaulins, hammers, nails and ropes." Many of the houses she saw on the island had been built improperly and with poor construction materials, Bulling explained. So CARE has now started investing more in training as well. "In the next few months or year or two, we will train carpenters and show them how to build stronger houses." 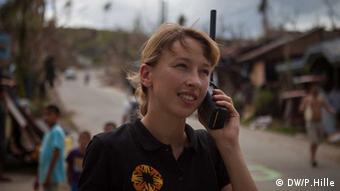 At the end of November, Bulling left the Philippines to come back to Germany. She said it had been one of the most difficult deployments ever. At the same time, she said the work had been positive.

"Cooperation with the local authorities worked very smoothly. And the people there were so motivated to start with the reconstruction process." Many survivors volunteered with CARE to hand out supplies.

Cooperation, optimism, and a fighting spirit - that is the impression that CARE helpers could take back to Germany. That, and an encounter with a little girl after the typhoon. The girl's family had lost their house and were searching for things they could use. The little girl found her schoolbooks.

"The sun was shining and she was standing outside drying her books. She had hoped she could return to school soon." She had asked herself whether she and her family would have the strength to recover quickly from such a disaster. "I found it amazing - this courage to say life must go on."

Two months later, the little girl's wish of returning to school has been fulfilled.

When you hear the word "drone," you may think of war and surveillance. But as relief efforts in the Philippines after super typhoon "Haiyan" have shown, the unmanned aircraft can also help save lives in times of crisis. (06.01.2014)

Bolstered by donations, European resort and dive operators are helping resilient islanders fix damage caused by Typhoon Haiyan on the idyllic Philippine island of Malapascua, or 'Bad Christmas,' in time for the holidays. (23.12.2013)