When you hear the word "drone," you may think of war and surveillance. But as relief efforts in the Philippines after super typhoon "Haiyan" have shown, the unmanned aircraft can also help save lives in times of crisis. 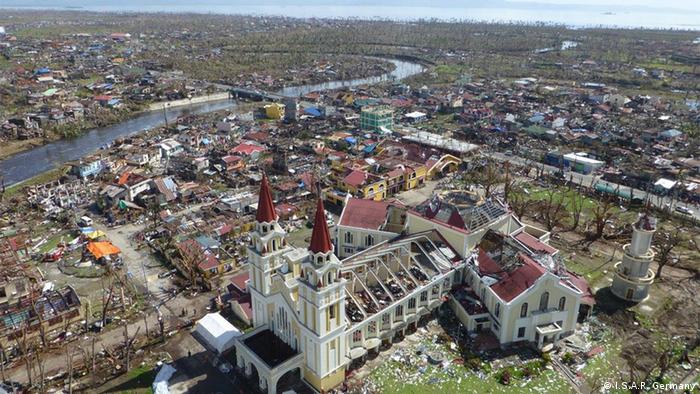 Mark Rösen's greatest pride weighs about two kilograms, can stay in the air for up to 20 minutes and bears the cryptic name "AscTec Falcon 8." What appears to be a model helicopter is actually a high-tech drone produced by the German company Ascending Technologies and outfitted with eight propellers, a GPS tracking device and a high-resolution camera.

Rösen has been working for the German aid agency I.S.A.R. (International Search and Rescue) for many years. He first deployed the drone - which was made available for free by Ascending Technologies - while working as a relief worker in the Philippines.

"The drone enabled us to film the area from the air and determine which streets were passable. We no longer needed to send anybody out to scout the area," Rösen said, adding that the team was relieved by this, as exploring a disaster zone without the help of up-to-date imagery can be very risky and time-consuming. 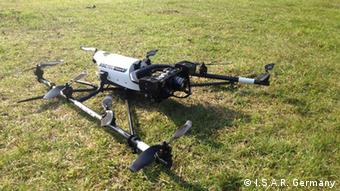 I.S.A.R. Germany specializes in search and rescue operations and is on standby in the case of a building collapse, explosions, earthquakes, floods or storms anywhere in the world. In the Philippines, Rösen's team was mainly responsible for providing medical assistance to the victims. His organization sent a total of 39 doctors, paramedics and assistants late November to Palo, a city located some ten kilometers south of Tacloban - one of the areas hardest hit by Typhoon Haiyan, aka. Yolanda. Rösen and his team were able to treat more than 2400 people over a period of roughly two weeks.

When it comes to saving human lives, every second counts. But official satellite imagery of the affected areas is often not made available on time, according to Rösen. "It can take hours until a satellite is repositioned." But things are different with the drone, he says. Once airborne, the drone transmits images to a ground station within seconds, and these images are often sharper than the ones provided by satellites, as they were taken from a much shorter distance, Rösen adds. With a 24-megapixel resolution, the pictures are said to be so detailed that one can even identify license plate numbers. 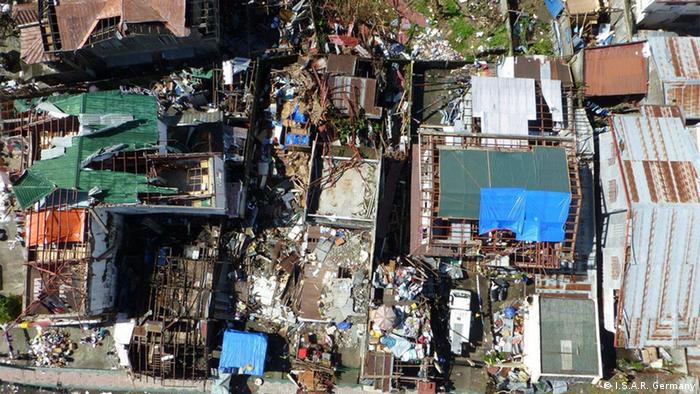 In the Philippines, Rösen and his colleagues transferred the areal photographs taken by the drone to a computer and then compared these to images from Google Maps.

With the help of coordinates they were then able to assign the operational areas and forward this information to other aid agencies. This allowed the team to make quick decisions as to where the best places to set up field hospitals would be. The images led the team to settle in a square right next to the cathedral of Palo. The mostly undamaged building lies in the center of town and could be easily reached by residents.

But quick access to high resolution images is not the only advantage provided by the drone. It also helps elude an autocratic hurdle: "One can deploy the drone without the need to get anyone's approval. And after a day of training everyone is capable of steering the aircraft," says Matthias Beldzik, Ascending Technologies' marketing chief.

The manager says the AscTec Falcon 8 is capable of withstanding winds of up to 10 meters per second. However, rain weather limits the drone's capabilities: "When filmy under heavy rain, the camera lens gets wet, the rotor blades swirl the rain drops even more, thus worsening visibility," said Rosen.

The Swiss firm Danoffice IT also provided two reconnaissance aircraft for the relief efforts in the Philippines. Engineer Liam Dawson traveled late November to the Southeast Asian country with two "Huginn X1" drones to assist aid organizations on the ground. One feature of the device turned out to be very useful:

"Our drone carries a thermal imaging camera, which can help us detect people in the rubble who are still alive," Dawson explained. The drone was also used for tracking down bodies: "There were many corpses floating in the ocean after the typhoon. The drone assisted us in locating them," Dawson added. 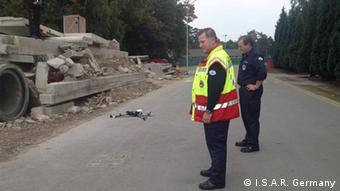 A small, but pricy device

Engineer Dawson justifies the high price by saying: "The drone can help you save time and lighten your workload. This enables aid workers on the ground to do other type of work." Rösen sees a big future for the gadget: "It will remain part of our resources. From now on we will take the drone to every area we operate in."

Typhoon Haiyan not only destroyed houses and uprooted trees, it has also affected the livelihood of hundreds of thousands of Filipinos. Many of them want a fresh start but some have lost hope. (19.11.2013)