As aid begins to reach areas cut off by typhoon Haiyan, Philippine President Aquino is under fire for his government's alleged slow response to the disaster. Experts say this might be his biggest test yet. 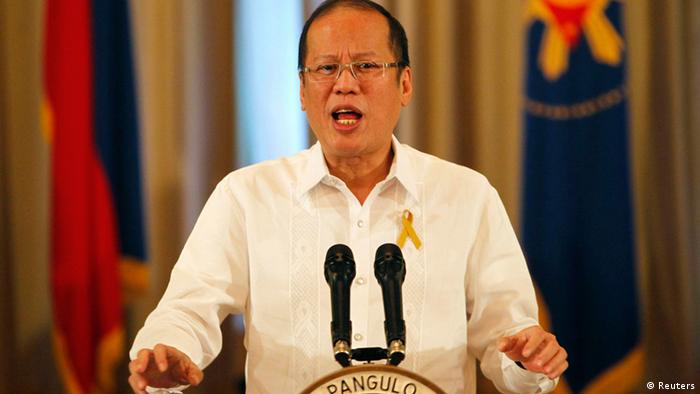 Almost a week and a half after super typhoon Haiyan, one of the strongest storms ever recorded, swept through the Philippines, international aid has begun to trickle in to the most isolated areas. Since the arrival of the United States' USS George Washington aircraft carrier on November 14, military helicopters have been airlifting food, water, medical supplies and basic necessities.

President Benigno Aquino III, who faces increasing pressure over his government's response to the storm, toured some of the worst-hit areas on Sunday, November 17, and called for an understanding of the logistical challenges. "Please have patience. These affected areas are really spread out," Aquino was quoted by news agency AFP as saying. "Don't lose hope," he added.

However, it is doubtful whether this will be enough to comfort the many people who have expressed their anger at what they consider to be the government's slow response to the disaster.

Aquino, the son of former president Corazon Aquino and Senator Benigno Aquino Jr., was elected to office in July 2010 on the promise of curbing the rampant corruption that had been affecting the Southeast Asian nation for years. His policies had contributed to the Philippines' rise as one of the fastest-growing economies in Asia, with a growth rate exceeding seven percent over the past four quarters. 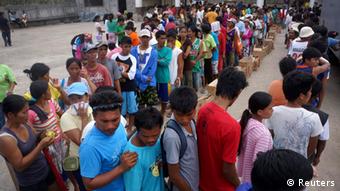 Commonly known as Noynoy, the popular president suffered his first major blow in July this year, when a whistle-blower revealed that some lawmakers, including the president's allies, were stealing up to half the money allocated to local projects "from discretionary government funds," according to a Reuters report.

By the time Typhoon Haiyan, known as Yolanda in the Philippines, struck in early November, the scandal had already tainted the president's image as a corruption fighter and prompted large-scale speculation about the durability of Aquino's popularity, with some polls indicating approval ratings of 49 percent, down from 74 percent just a year ago.

And his popularity is likely to take a further beating, unless the president and his team show a "marked improvement," in terms of efficiently coordinating and organizing the relief efforts, Mars Buan, a senior analyst at political risk consultancy Pacific Strategies & Assessments (PSA), told DW.

The controversy surrounding Aquino's handling of the current crisis starts with the number of casualties. Two days after the typhoon made landfall, on Sunday, November 10, some estimates on casualties were in some areas as high as 10,000. A few days later, the president dismissed these figures, saying they were overstated and caused by "emotional trauma."

The president, who in a CNN interview put the death toll between 2,000 and 2,500, was regarded by some as arrogant and insensitive, especially as there were still unburied bodies lying on the streets, as well as in the ruins of destroyed buildings. The official death toll has now climbed to almost 4,000.

A week after Typhoon Haiyan caused widespread destruction in the Philippines, the country's politicians have been accused of responding too slowly. Experts tell DW how the Philippine government can improve. (16.11.2013)

Tecson John Lim, the administrator of Tacloban City, the provincial capital that was largely destroyed by Haiyan, said Aquino may have deliberately downplayed the casualties in order to avoid panic. However, PSA analyst Buan criticized that by playing down the impact of the disaster, including the death toll, the president was hampering effective and appropriate responses and relief efforts.

Was the country prepared?

Another question that has led to friction is whether the country was sufficiently prepared for a typhoon of this magnitude. Zachary Abuza, a professor of political science and expert on South East Asia at Simmons College, in Boston, Massachusetts, says the administration initially did a "good job" at evacuating people from the storm's path ahead of time. These measures, he said, were "probably why the death toll is surprisingly low despite the storm's ferocity."

They also praise previous measures undertaken by Manila such as setting up the National Disaster Risk Reduction and Management Council and allocating part of the annual budget toward preventative and risk reduction measures by setting up so-called "calamity funds."

Despite the preparations, experts point out that the magnitude of the storm took the Aquino government by surprise. One of the major problems was not simply the rain and heavy wind caused by the typhoon, but the unusually high surge it produced in some areas, according to Steven Rood, Philippines expert at the US-based Asia Foundation. Tsunami-like surges up to 13 feet high were the reason, he said, that 80 percent of the deaths so far had been attributed to drowning.

Furthermore, Arjan P. Aguirre, political scientist at the Ateneo de Manila University, points out that there was no official announcement on the part of the national government to forcibly evacuate the low-lying areas, such as Tacloban or to mobilize the navy or air force for immediate response.

Adding to this, Buan pointed out, "Logistical problems and the lack of coordination have hampered relief efforts on-the-ground, especially on the islands of Samar and Leyte - the two most affected areas - thus slowing the pace of the response."

The Aquino administration has defended its handling of the crisis by stating that relief efforts were beginning to pick up. "This is like a conveyor belt," Interior Secretary Mar Roxas told reporters in Tacloban City over the weekend. "We work overnight to pack the goods, load them and in the morning they go out. Every day, the people can count on relief supplies reaching them." 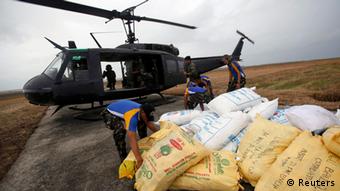 There is growing criticism over the slow pace of relief operations

However, as helplessness and despair continue to affect the hardest-hit communities more than 10 days after the typhoon, criticism lingers over the Aquino administration's crisis management.

"The Philippine government should understand that the feedback they're getting from the people is not meant as an attack but as a call for action," Buan told DW, adding that the way things were going, President Aquino should expect to be judged quite harshly. "This is the biggest test for his presidency yet and he can only regain control over the narrative as long as his efforts are regarded as a success."

Elizabeth Ferris, co-director of the Brookings-LSE Project on Internal Displacement, agrees that the once very popular president Aquino has suffered politically from his administration's slow response to the disaster.

But Ferris also points out that one of the most important lessons for the world to draw from the current situation is that, given the reality of climate change, all governments are going to have to invest more in planning for responding to these huge disasters, even if it means taking difficult political decisions, she told DW.