Red Cross ′concerned′ over security in Philippines | Asia| An in-depth look at news from across the continent | DW | 12.11.2013

Four days after typhoon Haiyan hit the Philippines, survivors are desperate for help. Red Cross member Soaade Messoudi talks to DW about the relief efforts and the obstacles aid agencies face in the affected areas. 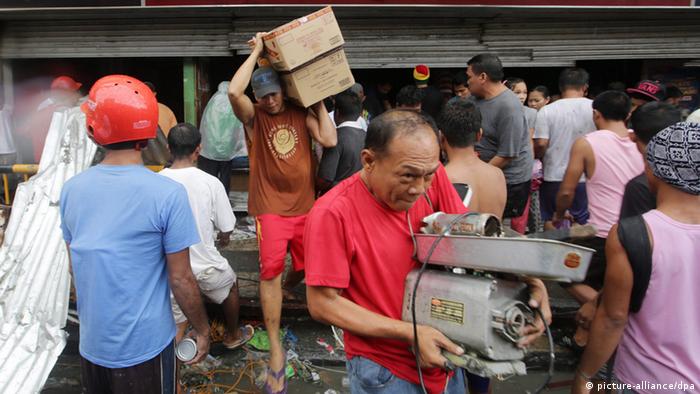 DW: What is the situation like at the moment?

Soaade Messoudi: At the moment the situation is much the same as yesterday. Rescue workers are trying to get as soon as possible to the affected areas. The situation is very difficult for the people on the ground, who have been waiting for a long time for much needed help. They need everything: water, food, shelter and medical attention.

We have a team on the ground in Tacloban. The International Committee of the Red Cross (ICRC) will be focusing its assistance on the island of Samar. We have teams which are now trying to get the relief distribution working as soon as possible.

There have been reports about cases of looting and violence outbreaks. What have you heard about it?

There have been rumors of people looting especially in certain areas of Samar and in the city of Tacloban. People are desperate. They need to eat and drink in order to survive, so there have been attacks on supermarkets, private businesses and so on. We also heard of Red Cross trucks being targeted. However, this was not the ICRC's convoy made up of eleven trucks headed to Tacloban.

Is it becoming dangerous for rescue teams to bring relief supplies to the most affected areas?

This is a new concern which comes on top of the many difficulties we are already facing in terms of communication and infrastructure. We have to take the security situation into account in order to ensure that the distribution of relief supplies can take place safely. We can only hope that the situation doesn't turn into chaos.

Could you give us an estimate on how many people might die due to a lack of food and water?

The Philippines are wracked with suffering and destruction following Typhoon Haiyan. The country needs urgent help, and online social networks are playing an important role in providing it. (12.11.2013)

The first German planeload of supplies for the Philippines included 5,400 blankets, 3,000 tents, and medical equipment. But no one knows what exactly is needed, or where it should go. (11.11.2013)

Every year, 20 typhoons hit the Philippines, a country also threatened by earthquakes and volcanos. These natural disasters have grave economic consequences. (11.11.2013)

Never before has there been a typhoon as disastrous as Haiyan in the Philippines. Mankind can't prevent natural disasters, but people can do more to protect themselves, says DW's Judith Hartl. (11.11.2013)

Not really, as the figures on those people who died or have gone missing directly after the storm haven't been confirmed. The figures that have been communicated by the media refer only to certain areas of the country. We must not forget that the typhoon affected the whole central area of the Visayas, so it is too early to provide any figures.

The media attention is focusing mainly on the island of Leyte and the city of Tacloban. Do you have any idea of how hard other islands were struck by the typhoon and what the current situation is like in those areas?

The situation is likely to be as bad in other islands as it is on Leyte. I have heard of the Palawan islands being heavily affected. The same is true for some small towns in Samar. The ICRC is working closely with the Philippines Red Cross and the International Federation of the Red Cross in its response. It was decided that we would be focusing our support mainly on Samar Island, as the international community has been operational there for many years and we know we are best placed to provide support to the area.

Many organizations have sent aid supplies to the Philippines. How do you coordinate the relief efforts and communicate with one another?

The Red Cross and Red Crescent have decided, along with their partners, on who will cover which area. There are also many members of Red Cross national societies coming to the Philippines to provide support. All of this is coordinated among our partners. We are also in contact with the UN agencies, but we work independently of them.

Soaade Messoudi is the spokesperson of the International Committee of the Red Cross in Manila.