Natural disasters threaten Philippine growth | Asia | An in-depth look at news from across the continent | DW | 11.11.2013

Every year, 20 typhoons hit the Philippines, a country also threatened by earthquakes and volcanos. These natural disasters have grave economic consequences. 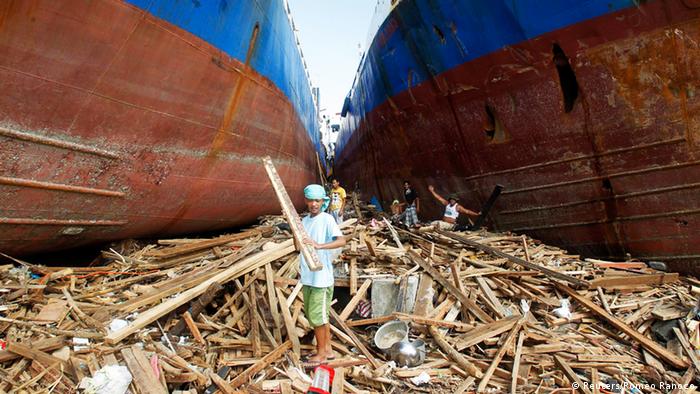 The Philippines is one of the countries most prone to natural disasters. The German development grouping, "Alliance Development Works," ranked the country third in its global risk report index 2013, after Vanuatu and Tonga. The country is not just threatened by storms, but by flooding, earthquakes and volcanic eruptions, too.

The cost of disaster

This has severe consequences for the country's economic development. The direct costs resulting from natural disasters lower annual gross domestic product by 0.8 percent, Jerry Velasquez, coordinator for the Asia-Pacific region of the United Nations International Strategy for Disaster Reduction (UNISDR), told Deutsche Welle. In addition, a study by the World Bank and the Philippines' National Disaster Coordinating Council identifies "indirect and secondary effects that further raise the costs," including major social and environment-related costs.

"The Philippines has consistently experienced financing gaps owing to disasters since 2000," the UN's 2013 Global Assessment Report on Disaster Risk Reduction (GAR) reports. The country's 2013 national disaster budget, amounting to about 128 million euros ($171 million), was used up even before super typhoon Haiyan hit. 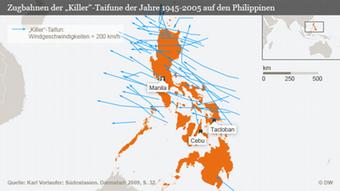 An average of 20 super-typhoons hit the Philippines every year

The mounting costs are due to different factors, Velasquez points out: "The Philippines have a unique zero-victim policy. In the case of an ever-growing and increasingly exposed population, zero victims means more people have to be evacuated." That increases costs. Strategies to move people to safety differ: evacuation as soon as danger threatens, or shortly before the disastrous incident occurs. The Philippines opt for early evacuation.

In that case, it can be difficult to persuade people of the necessity of evacuating, as the disaster is still far away and it is not clear who will actually be affected. People will ask, Why am I here? When can I go home? Some governors in the Philippines have been known to distribute five kilos of rice to every family in the storm evacuation centers as an incentive. "That costs a lot of money," Velasquez says. A million people were evacuated before Haiyan smashed into the Philippines.

Economic growth also increases the cost of disasters in the Philippines. It sounds paradoxical, but according to Velasquez, the richer a country, the greater the loss. The UN's GAR report says investments aimed at increasing competitiveness and productivity inadvertently also raise risk. The Fukushima nuclear disaster is a good example: while nuclear energy boosts Japan's competitiveness and productivity, it also increases the value of the risk because the disaster has resulted in human and economic losses that no one can specify as of yet. 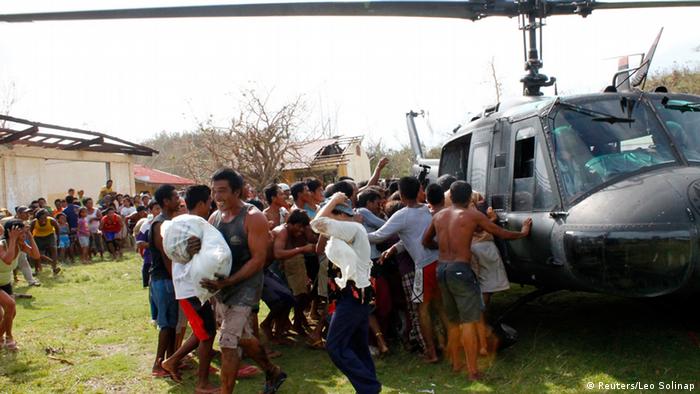 The military provides most of the initial emergency assistance

The same effect is noticeable in the Philippines, though on a smaller scale. Economic growth of almost 7 percent is based on the rapid growth of the productive population. At the same time, the population is increasingly in danger "because people are willing to accept risk for short-term profits," Velasquez says. Industries choose production sites on rivers and in coastal regions, and workers follow suit. As a result, more people are affected by storms and floods. The infrastructure and industrial facilities in emerging countries are also more easily damaged, says the UN report, due to weaker building structures and materials.

Prevention instead of reaction

To reduce the number of victims and the exploding costs, the Philippines in 2010 passed a National Disaster Risk Reduction and Management Plan. It proposed changing the reactive strategy to a preventive one. The national disaster budget was re-distributed: 30 percent is now earmarked for emergency aid, while 70 percent goes to prevention and risk reduction.

It hasn't quite been implemented yet, however, Velasquez says. Despite the plan, the government still puts too much money into emergency aid. It should instead change its city planning and investment policies so that it consistently takes account of the effects of natural disasters.

Typhoon Haiyan is one of the deadliest natural disasters ever to hit the Philippines. But it’s far from the only one - the Southeast Asian country is located in an area that has been struck by a number of major storms. (10.11.2013)

Never before has there been a typhoon as disastrous as Haiyan in the Philippines. Mankind can't prevent natural disasters, but people can do more to protect themselves, says DW's Judith Hartl. (11.11.2013)

Despite a heavily damaged infrastructure, aid agencies are trying to get relief supplies to the people in the typhoon-ravaged Philippines. CARE aid worker Sandra Bulling talks to DW about her impressions. (11.11.2013)

Logistics and past mistakes loom over relief

Aid organizations are struggling through blocked roads and devastated airports to bring relief to the Philippines. But past experience suggests that even tougher tasks lie ahead for the country. (11.11.2013)

Desperation sets in among typhoon survivors

Philippine authorities now say at least 388 people have been killed by Typhoon Rai, which hit the country nearly two weeks ago. Disease outbreaks are adding to the woes of local residents.

Authorities have said at least 208 people have died in the Philippines, with thousands of other victims losing their homes. Rescue operations continue around the clock.

Fatalities have been reported in several regions after Tropical Storm Kompasu barreled across the Philippines, with climate change making the extreme rainfall increasingly deadly.