The four horsemen of Trump′s ecopocalypse? | Environment | All topics from climate change to conservation | DW | 18.01.2017

As President-elect Donald Trump's cabinet and agency picks wend their way through confirmation hearings, environmentalists are gearing up for a fight. Examining the key players provides some idea of what to expect.

President-elect Donald Trump has put forth his new cabinet - and environmentalists are up in arms about it.

"Stop climate deniers! Tillerson, Pruitt, Perry, Zinke" read a poster at a rally in New York, where protesters gathered to convince senators to vote against those candidates at confirmation hearings.

Numerous environmental organizations have called on supporters to urge their senators to do the same.

But what is their background - and what can we expect? 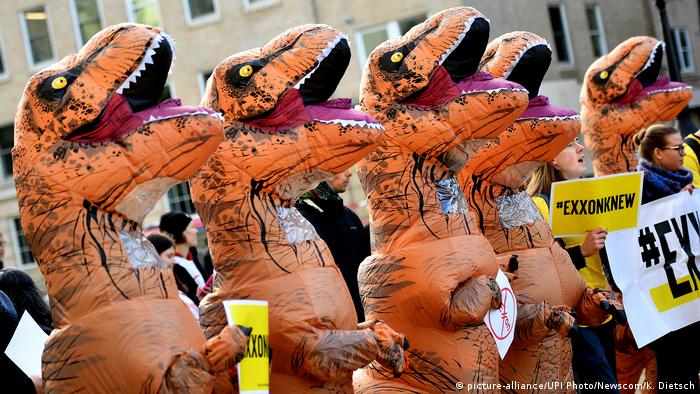 Tillerson, who has been tapped by Trump to become Secretary of State, has worked for petroleum giant ExxonMobil for more than 40 years - he was CEO for a decade, until 2016.

At his confirmation hearing last week, Tillerson dodged questions as to whether he believed climate change was caused by humans, saying "the risk of climate change does exist and the consequences of it could be serious enough that action should be taken."

He added that the ability to predict the effects of greenhouse gas was "very limited," and that climate science was "not conclusive."

At the same time, Tillerson also said he believed it was important to remain at the table to take part in climate change conversations. During his campaign, Trump had vowed to "cancel" the Paris climate deal signed by nearly 200 countries at the end of 2015. 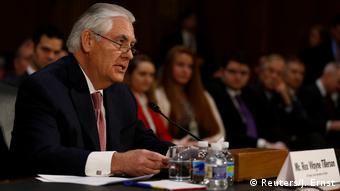 Tillerson sought to dodge certain questions at his confirmation hearing

According to Sierra Club, at his confirmation hearing Tillerson proved that he was "a climate science denier," said Sierra Club Executive Director Michael Brune in a statement.

"Tillerson's comments on climate change were as murky as water after an oil spill by his former employer … his refusal to acknowledge that fossil fuels - which Exxon profits from - are harming the climate is reckless and dangerous," Brune added.

After the hearing, Virginia Senator Tim Kaine - a Democrat who was part of the panel who questioned Tillerson - came forward and said he would oppose Tillerson's nomination.

Tillerson declined to answer questions about whether "ExxonMobil had long understood the connection between CO2 emissions and climate change, but chose to wage a public campaign to misinform the public about this scientific consensus," Kaine said in a statement.

Another highly contentious pick is Oklahoma Attorney General Scott Pruitt, who has his confirmation hearing on Wednesday (18.01.2017). Pruitt is slated to be in charge of the Environmental Protection Agency (EPA) - which he has sued multiple times.

"He has made clear through his lawsuits and statements that he believes … that much of the work that EPA does should be handled at the state level rather than through the federal EPA," Kevin Kennedy, deputy director of World Resource Institute's US Climate Initiative, told DW in writing.

This although "few states have the resources to take on the role that the EPA has played on protecting the environment," he added.

Pruitt will do what he can to roll back any progress the EPA has made on addressing climate change, and insuring clean water and air, Kennedy said. "The various environmental laws in the US, though, do require EPA's actions to be supported by science," he added. 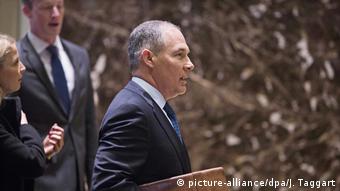 Pruitt, who has fought against the EPA for years, has now been tapped to head the agency

Kennedy does not believe Pruitt will be able to shut down the agency - but he could cut funding and limit its effectiveness.

The agency could downplay enforcement of existing rules, miss deadlines for action, or for example begin rulemaking to undo Obama's landmark Clean Power Plan, according to Kennedy.

But the environmental community and a number of states are prepared to challenge any actions - or lack thereof - in court.

On global warming, Pruitt has stated the debate is "far from settled," claiming "scientists continue to disagree about the degree and extent of global warming and its connection to the actions of mankind."

Yet according to NASA, at least 97 percent of actively publishing climate scientists agree that warming trends over the past century are extremely likely to be due to human activities.

John Walke, director of the Clean Air Project of the Natural Resources Defense Council (NRDC), said that Pruitt had devoted his career as Attorney General to fighting the EPA's basic mission: to protect human health and the environment.

Trump has tasked former Texas Governor Rick Perry with heading the US Energy Department - the same department he wanted to get rid of when he ran for president in 2012.

He's been a vocal climate change denier, calling it a hoax invented by scientists to get more funding.

"Putting Perry in charge of the Department of Energy is the perfect way to ensure the agency fails at everything it is charged to do," Brune said. 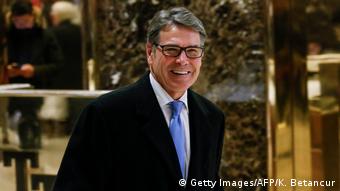 However, Texas with Perry at the helm did increase its wind energy production - a form of renewables against which Trump holds a personal vendetta, due to clashes with wind farms in his personal business dealings.

Perry was a board member of two energy companies developing the controversial Dakota Access Pipeline project, and still owns stock in the two companies.

"Perry's financial interests in major energy projects like the Dakota Access pipeline make it obvious that there's no way he could manage the agency's activities impartially," said Brune.

Perry has said he will divest and not take part in any decisions involving these two companies.

"More drilling and fracking, and more pollution [is] what we're getting with Perry and Trump," Brune concluded.

Perry is set to face confirmation hearings on Thursday.

Zinke, an ex-Navy SEAL and representative for Montana's at-large congressional district, has been tapped for Secretary of the Interior.

As Interior Secretary, he would oversee more than 20 percent of all US land, including national forests, desert lands, and national parks such as Yosemite and Yellowstone.

The Department of Interior is responsible for key decisions on those public lands, including around resource extraction and wildlife management. 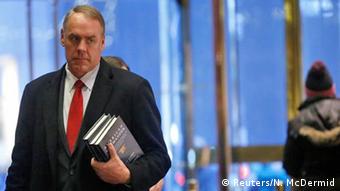 Climate change is not "proven science," according to Zinke

An early supporter of Trump, Zinke endorsed the controversial Keystone XL pipeline, which was ultimately vetoed by Obama.

He was quoted in a Montana newspaper as saying that manmade climate change was "not a hoax, but it's not proven science either."

At his confirmation hearing on Tuesday, he said it was "indisputable" that the climate is changing, and that human activity is a major reason - but that there's still debate about how much humans have influenced the climate and "what we can do about it."

Zinke's voting record includes supporting selling off or privatizing public lands, and commercializing hunting. He has supported legislation to boost land and water conservation, as well as advocating for increased coal mining, and oil and gas drilling.

The NRDC is among many groups demanding that Zinke clarify his conflicting record.

All of the nominees must be confirmed by a simple majority in Senate after Trump's inauguration.