Will the Dakota pipeline protest victory last? | Environment| All topics from climate change to conservation | DW | 05.12.2016

The US Army says alternative routes need to be considered for an oil pipeline that was to cross native lands and place water sources at risk. But can the victory hold? And why has this protest gained so much attention? 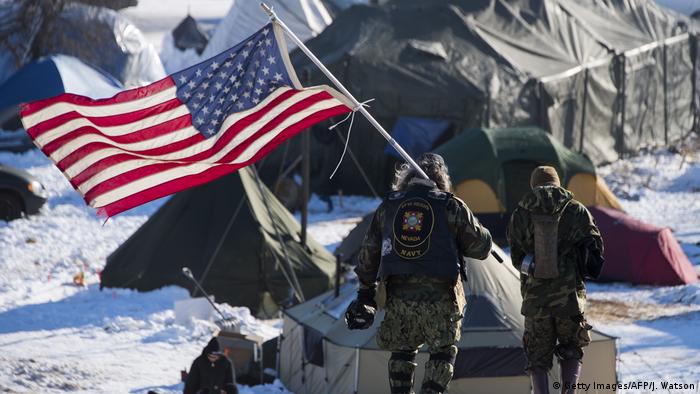 The Standing Rock Sioux Tribe is declaring victory after the United States Army announced Sunday (04.12.2016) that it will not allow construction to begin on a planned pipeline project through Native American lands.

But with the unprecedented decision likely to be reversed by the incoming administration of president-elect Donald Trump, environmentalists are torn over whether to tell protesters at the massive protest camp that has built up in a tribal area over past months to stand down.

In a statement, Jo-Ellen Darcy, the Army's assistant secretary for civil works, said "the best way to complete that work responsibly is to explore alternative routes for the pipeline crossing."

The Dakota Access Pipeline was approved several months ago, with a plan to carry crude from the Bakken oil fields in western North Dakota to Southern Illinois.

The planned route through the Standing Rock Indian Reservation, which straddles North and South Dakota, drew protests from indigenous activists and environmentalists. They say it risks pollution to the Missouri River and Lake Oahe, which the tribe uses for drinking water, and disrupt grounds that are spiritually significant. Since summer, a large camp of protesters has grown at the reservation - it now numbers thousands of people. Most recently, several hundred veterans joined the protest.

"All of Indian Country will be forever grateful to the Obama Administration for this historic decision," he said. "With this decision, we look forward to being able to return home and spend the winter with our families and loved ones, many of whom have sacrificed as well."

But many in the movement are concerned that disbanding the camp will cause the actions to lose momentum and fade from the headlines - opening the door to a quiet reversal of the decision by the Trump administration in a few month's time.

"There is definitely a huge risk that this decision will not be carried over beyond Obama's presidency," Lilian Molina, a spokewoman for Greenpeace, told DW.

Last week, Trump had said that he supports finishing the pipeline, which is nearly complete aside from the section through the Indian reservation. But the army's decision is not final, and could be easily reversed by the next administration. 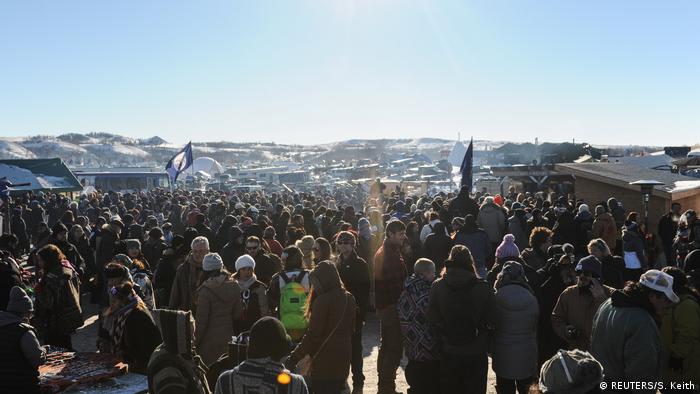 Energy Transfer Partners, the company which is building the pipeline, has indicated it will oppose any rerouting of the pipeline that avoids native lands. Trump owns stock in the company, but has insisted that will not affect his decision on the project.

In a little-known connection to Germany, the Bayerische Landesbank is among 17 banks worldwide supporting construction of the pipeline with more than $2.5 billion, according to German nongovernmental organization Urgewald. Other lenders include Citigroup, BNP Paribas, ING Group, Wells Fargo and Société Générale.

For some, the government's denial set an unsettling precedent, as Energy Transfer Partners had undergone all necessary reviews and permitting processes. In a statement, the company called the decision "a purely political action."

"The White House's directive today … is just the latest in a series of overt and transparent political actions by an administration, which has abandoned the rule of law in favor of currying favor with a narrow and extreme political constituency," the company said.

It added that it "fully expects to complete construction of the pipeline without any additional rerouting in and around Lake Oahe."

"Nothing this administration has done today changes that in any way," Energy Transfer Partners concluded.

Kevin Cramer, North Dakota's single congressional representative and a Trump supporter, suggested that Trump will reverse the decision after he is inaugurated.

Standing Rock in the spotlight

According to news reports, tribal leaders had been growing uneasy about the exploding size of the camp, which according to some had begun resembling a music festival rather than a protest camp.

With winter approaching, now may be a good time to scale down the camp - even if tribal leaders know the army's decision won't last. Studies for alternative routes will likely take several months.

But why has Standing Rock become such a flashpoint, when so many pipeline protests at other Native American reservations have gone unnoticed over the years?

Activists point to the wide reach of social media for getting the word out. They also note that American mainstream media largely ignored the story until security services clashed with protesters this fall, even though the issue had flooded social media news feeds for months.

"The atrocious use of militarized law enforcement to protect private interest has been captured in real time with the use of social media - and that has also galvanized people to stand with Standing Rock," she added. 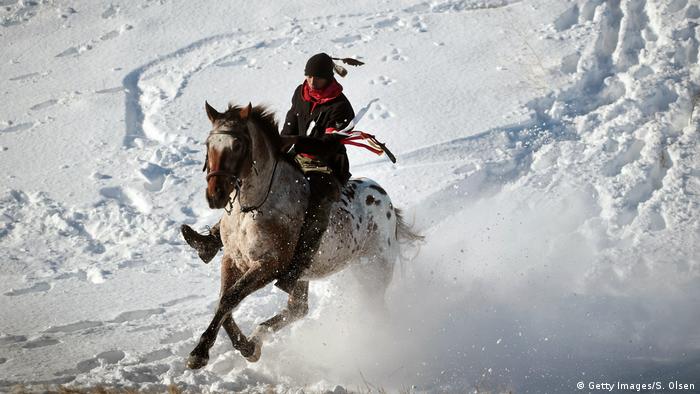 The protest also linked social justice and environmental concerns, tapping a broad base of activists, both young and old. Also the burgeoning climate protection movement was activated, as the pipeline represents fossil fuel development.

"This fight has brought the issue of indigenous rights and sovereignty in the US to mainstream America in a way that can't be reinterpreted or rewritten as it has in the past," says Molina. "The decision to reroute through tribal lands is a classic example of environmental racism."

In the long term, the camp won't be going anywhere, Molina concluded, as an eco-village is being built on tribal land as a permanent model for living sustainably in the face of fossil fuel extraction and devastation.

"The pipeline must be stopped for good, and the water protectors are determined to make sure that happens."

Activists disrupted the flow of millions of barrels of crude oil from Canada to the US by turning off valves on North America's pipeline system. An action of this magnitude by environmentalists is thought unprecedented. (12.10.2016)

Is overpopulation the main threat to the planet? No - it's overconsumption.

Is the CANZUK trade bloc Britain's attempt to usurp the EU?