Washington has formally denied a TransCanada request to delay its decision over a controversial oil pipeline. The Obama administration has been under pressure to reject the Keystone XL pipeline. 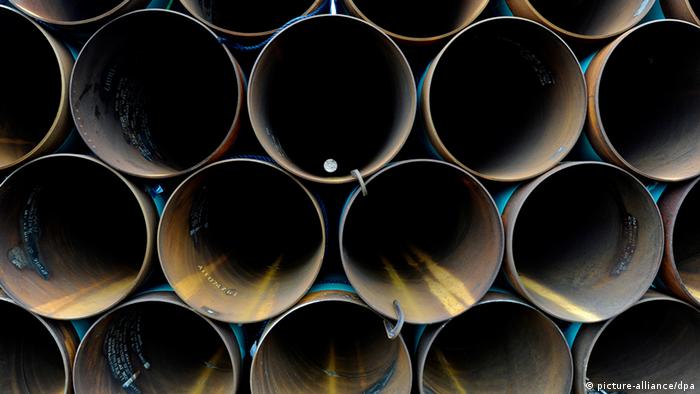 TransCanada's request for a delay over the decision over its international pipeline linking Canadian oil fields with US ports until after the November 2016 presidential election has been denied, the US state department, which is tasked with reviewing the international pipeline, said Wednesday.

"The secretary believes that, out of respect for that process and all the input that has gone into it, that it is the most appropriate thing to keep that process in place, to continue the review," State Department spokesman John Kirby told reporters. "We're not required to pause it based on an applicant's request. There's no legal basis to do that."

It has been an unusual reversal of roles for TransCanada, which complained bitterly for years about the Obama administration's foot dragging before suddenly requesting the process be put on hold.

While most cross-border pipelines take less than a year and a half to approve or reject, the Keystone XL project has dragged on since September 2008 - before Obama was elected president.

But now the Obama administration, after seven years of delay, seems to have found new sense of urgency when faced with the prospect of letting the next US president decide on the fate of the $8 billion (7.36 billion euro) oil pipeline.

All of the major Democratic candidates oppose it - including former Secretary of State Hillary Clinton. Key Republican lawmakers overwhelmingly support it.

The nearly 2,000-kilometer (1,200 mile) pipeline would carry 830,000 barrels a day of mostly Canadian oil sands crude to Nebraska en route to refineries and ports along the US Gulf Coast.

The pipeline has drawn intense opposition from green groups who argue it is inconsistent with efforts to cut down on greenhouse gases and reduce dependency on fossil fuels. Yet opposition Republicans, energy companies and some labor groups maintain it would create jobs and reduce US reliance on Middle Eastern oil.

"The fundamental question remains: Do Americans want to continue to import millions of barrels of oil every day from the Middle East and Venezuela or do they want to get their oil from North Dakota and Canada through Keystone XL?" TransCanada spokesman Mark Cooper said. "We believe the answer is clear and the choice is Keystone XL."

But global oil prices have robbed much of the economic incentive for approving the pipeline. Once topping $100 (92 euros) a barrel, crude oil has fallen to less than $50, making the business of extracting and transporting oil less lucrative.

Analysts say that by postponing the decision by a year or more, TransCanada could be waiting for higher oil prices for the pipeline to make economic sense.