TransCanada has asked the US to pause its review of the proposed North American Keystone XL pipeline. President Barack Obama is expected to decide on the controversial project before leaving office in January 2017. 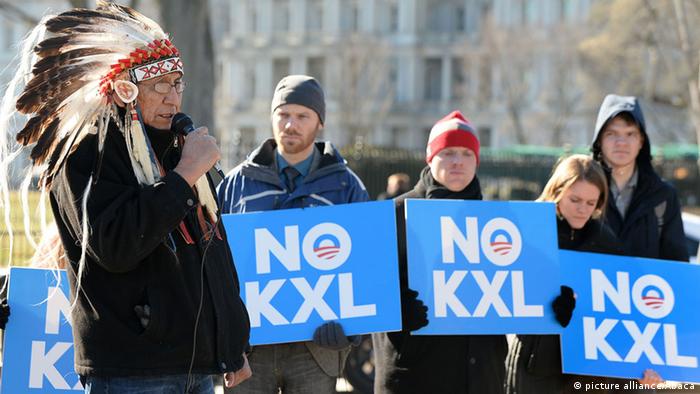 Facing up to a year of wrangling in the Great Plains state of Nebraska, TransCanada asked officials in a letter sent to US Secretary of State John Kerry on Monday to suspend review of the Keystone XL pipeline. Such a move could delay a decision until after the 2016 US presidential election - allowing a potentially petrol-friendly Republican successor to Barack Obama, who had looked likely to reject the pipeline, to greenlight it.

"In defeat, TransCanada is asking for extra time from the referees, and clearly hoping they'll get a new head official after the election," Bill McKibben, co-founder of the anti-climate change group 350.org said late Monday. "It's time for the current umpire, President Obama, to reject this project once and for all."

Over the past seven years, the 1,179-mile (1,900-kilometer) pipeline has come under frequent attack. Environmental activists say the project, which would carry oil diluted with benzene from the tar sands of the western province of Alberta, requires huge amounts of energy and water and increases greenhouse gas emissions. They also express concern that pipeline leaks could potentially pollute underground aquifers that are a critical source of water to farmers on the Great Plains in the United States.

"It is time to reject and give farmers, ranchers and tribal nations peace of mind that their land and water is protected," said Jane Kleeb, executive director of Bold Nebraska.

White House staff referred all questions to the State Department, which has reviewed the project because it crosses an international border. The State Department does not have to grant TransCanada's request for a pause in the review process.

On Monday, White House spokesman Josh Earnest had said that President Barack Obama intended to make a decision on the pipeline before the end of his presidency in January 2017, although he declined to elaborate on the timeline. The Vermont Senator Bernie Sanders, Hillary Rodham Clinton - Kerry's predecessor as secretary of state - and their opponents for the Democratic nomination have already gone on record as opposing the pipeline. All of the leading Republican presidential candidates support it.

Delays in approving the pipeline have caused friction between the US administration and the lame-duck Canadian Conservative government of departing Prime Minister Stephen Harper, who had complained about Obama's reluctance to approve the pipeline. Although Justin Trudeau, who will take office as prime minister on Wednesday, supports Keystone, he argues that relations with the United States should not hinge on the project.