Tillerson calls Russia 'an adversary' in US Senate hearing

Rex Tillerson, who's slated to be the next US Secretary of State, told his confirmation hearing that Washington needs to redefine its relationship with Moscow. The former-Exxon Mobil boss was given a nine-hour grilling. 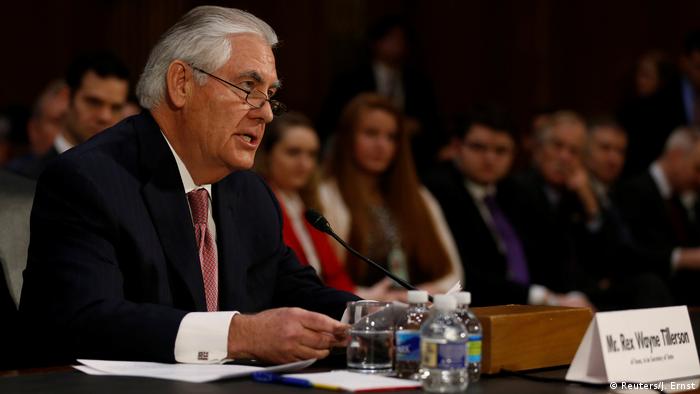 Tillerson was grilled by Senator Marco Rubio during the hearing

Tillerson said on Wednesday that Russia was one of several "adversaries" posing "considerable threats" to the world. But he refused to label Russian Preisdent Vladimir Putin a war criminal for country's role in the Syrian conflict, telling US Senators that "I would not use that term."

The former oil executive said that Russia's "recent activities have disregarded American interests," in reference to the country's annexation of Crimea in 2014 and its military intervention in Syria a little over a year ago.

During a nine-hour Senate confirmation hearing, US lawmakers frequently returned to questions concerning Tillerson's views on Russia, partly in light of criticism of his candidature after revelations of his close business ties with Putin.

Tillerson, who was awarded the Order of Friendship by Putin several years ago, declined to directly answer allegations that Russian hackers had intervened in the US presidential election.

However, the 64-year-old said he had no reason to doubt intelligence reports suggesting that hacking did occur, but declined to say whether he supported the sanctions leveled against Moscow in the wake of the allegations.

Tillerson emphasized the need for a different approach to dealing with Putin, saying that dialogue and engagement were critical to redefining the US-Russia relationship.

At one point, Tillerson admitted that he hadn't yet spoken to Trump regarding a policy concerning Russia, saying "that has not yet occurred."

Tillerson did make a clear break from Trump in his thoughts on Ukraine.

"Russia, today, poses a danger, but it is not unpredictable in advancing its own interests," he said, criticizing US President Barack Obama's "very weak response" to Crimea.

He said he "would have recommended that Ukraine take all of the military assets that it had available" and put them along the eastern border. 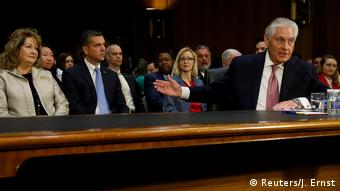 Aside from Russia, Tillerson also touched upon other issues, including China, terrorism and normalized relations with Cuba. He also acknowledged "risks" posed by climate change, saying they were serious enough to warrant action.

In comments likely to threaten US-China relations, he said Beijing should be denied access to islands it has built in the contested South China Sea.

Asked whether he supported a more aggressive posture toward China, he said: "We're going to have to send China a clear signal that, first, the island-building stops and, second, your access to those islands also is not going to be allowed."

Tillerson has been a controversial nominee for the position as secretary of state from the start, with Democrats and Republicans alike expressing concern over his lack of government experience and his many possible conflicts of interest as a result of his business ties.

Trump, meanwhile, hailed Tillerson as "brilliant" during his press conference in New York on Wednesday, which was held simultaneously with Tillerson's Senate hearing.

Reports in the US media indicate deep ties between Donald Trump and Moscow and claim that Russia had material it could use to blackmail him. Moscow rejects the claim as a "complete fabrication." (11.01.2017)